War in Yemen: a New Vietnam?

The Yemeni Civil War is probably not the most talked about conflict in western media, with all the attention attracted by the unfortunately well-known atrocities committed by the Islamic State in Syria and Iraq. Nevertheless, the bloodshed has reached sizable proportions with estimated 6000 dead since March 2015 and it cannot absolutely be underestimated for the gravity and magnitude of geopolitical effects it carries on the the Middle East and the rest of the world.

The war broke out as a confrontation between the Shiite rebels Houthis allied with President Saleh against the Sunni coalition led by President Hadi. The situation, as it often is the case, was not so simple and clear-cut even from the beginning. Understandably, all the regional powers were keeping a close look on the events even before the first shots had been fired. That was almost a given when considering the strategic position of Yemen at the border with Saudi Arabia and the Bab-el-Mandeb strait, a crucial passage for the maritime oil trade through the Red Sea and the Gulf of Aden. 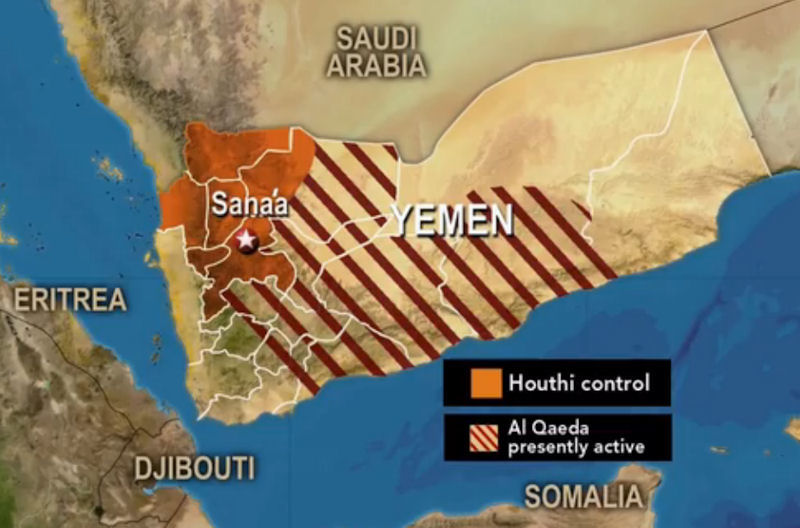 To continue to the more interesting angles, many other players are involved. For instance, there are recurrent allegations against Iran for providing weapons and training to the Houthis, in an attempt to use Yemen for a proxy war against the countries of the Arabian Peninsula, which are traditionally the champions of the Sunnah. Although, in all fairness the Iranian government firmly denied those claims and no conclusive evidence has emerged so far. On the other hand, President Hadi's faction has been able to count on the open support of the Arabian countries and of the United States.

On top of all that there is the inevitable interference of terrorist organizations, namely the Islamic State and Al Qaeda through its branch Ansar al-Sharia or Al-Qaeda in the Arabian Peninsula (AQAP). The former is trying to gain momentum by carrying out high profile attacks while the latter enjoys a historically strong presence in the country and controls a vast portion of the territory in the Ziat region.

All factors considered, the context of the conflict displays all the signs to potentially generate immense repercussions on multiple fronts. This potential began to become increasingly more real after a coalition of nine Arab countries, under the notable leadership of Saudi Arabia, decided to officially intervene starting 25 March 2015, about six months after the rebellion had begun escalating, launching a campaign of airstrikes on Houthis targets.

This is the point from which the events started to spin in unforeseen directions.

The coalition eventually resolved to step in most likely under the assumption that this was an affair that could have been settled quickly, thanks to their military superiority that was unmatched by the well more modest means of the insurgent faction. This interpretation is rooted in the hard facts that wars, especially those relying heavily on aviation, are very costly endeavors and on the same token Arabian Peninsula countries have been absorbed in the crude oil price decline for about three years now, and they may very well be for a few additional years. Of course, all hopes for a blitzkrieg-type solution failed, as experience irrefutably proved.

Even worse, quite against the predictions - and hopes - of the coalition they have been sucked in a war that is far from conventional and it is ruled by guerrilla, due to the special conformation of the Yemeni territory, which makes conventional warfare ineffective. This unsuccessful outcome is significant for many reasons and opens multiple scenarios.

For instance, in the struggle between Iran and Saudi Arabia for power, moral and religious superiority there is no denying that the former is gaining momentum. Now it is not as implausible as it was before that Iran may gain the upper hand somewhere in the foreseeable future.

Indeed, if we had to dissect the time line to dig out what factors could have tipped the scale giving the final push to the Saudi Arabia-led coalition to make their move in March, there is an element that stands out. The airstrikes were launched more than two months after President Hadi was forced to flee the country and even longer after the rebellion had been steadily on the rise, so this does not necessarily screams a sense of urgency on the Saudi side to get involved militarily. On the other hand, though, the timing of the intervention actually falls very close to the moment when the Joint Comprehensive Plan of Action for the Iranian nuclear program started to look like a done deal. It is extremely unlikely that this was a coincidence and in the end it turned out to be a masterful coup for Teheran.

It is also not a secret that King Salman's handling of Shia affairs is euphemistically firmer than his predecessor's. Saudi Arabia, for example, has to constantly deal with its Shiite minority, which is located in the oil-rich eastern regions and is regularly a source of unrest. All attempts to overthrow President Assad in Syria ended in failure so far. As if that was not enough, Iraq is shifting under the Iranian influence. It would have been only normal that under these circumstances Riyad felt the pressure to act and do so vigorously.

To recap, the combats might be taking place in Yemen, but for all purposes the protagonists of this sort of not-so-cold war are Saudi Arabia and the Sunnites on one side, and the Shiites and Iran on the other. It also starts to look more and more as the Kingdom of the Peninsula might have found itself stuck in their own Vietnam in Yemen, a war where their powerful military apparatus is ineffective, but still costs an estimated $ 200 million a day. All of of the above while the deficit from the oil trade was already weighing on the state treasury, the whole situation in the area is a muddle of factions, tribes, local conflicts and whatnot. And last, but not least, their historical Iranian enemy is steadily getting out from its situation of international isolation.

The difference here is that the United States could withdraw from Vietnam and somehow cut their albeit enormous losses, because in the end it was a country on the other side of the world. Saudi Arabia doesn't have that same luxury.