Today Americans are celebrating the most important national holiday — Independence Day. More than a year after the advent of the American Revolutionary War, on July 4, 1776, delegates to the Second Continental Congress in Philadelphia signed a document, which laid the foundation for a new country. The Declaration of Independence officially announced the separation of 13 newly-independent mutinous colonies from the metropolis and explained the reasons why Americans were at war with the British crown. By positing that all men are created equal, that they are endowed by their Creator with certain unalienable Rights, that among these are Life, Liberty, and the pursuit of Happiness, the Declaration set an agenda for all democratic state-building in the world for centuries to come. Both Russian and French constitutions have been defined by this narrative.

Inspired by the European enlightenment and its philosophers (Locke, Voltaire, Rousseau) as well as supported by the French expeditionary corps, George Washington’s army stood up for the newly-born nation’s very right to exist. After eight years of bloodshed, the United Kingdom eventually recognized America’s independence in 1783; coincidentally, the same year Crimea became a part of the Russian Empire.

However, in the Winter of 1775, victory was far beyond the horizon. Americans were gravely crashed at the Battle of Quebec. A couple of months later, the British were preparing for a counterattack in New York, which later became the most disastrous defeat of the Revolutionary Army over the course of the war. The Americans lost Fort Washington in Autumn 1776 and roughly 3,000 soldiers were taken hostage.

Meanwhile, intending to cut the supply of the rebellious colonies, Britannia tried to impose a naval blockade on the American continent. Being influenced by her correspondence with the French philosophers, an enlightened Russian Empress Catherine the Great from the very start was sympathetic to the Americans fighting for their freedom. Guided by her own country’s national interests, Catherine firmly opposed the British naval blockade. She continued to trade with the 13 former colonies. In 1780 Russia proclaimed the policy of armed neutrality, which meant that its ships would fight back if the British navy tried to stop them from crossing the Atlantic.

More than that, amidst the Revolutionary War George III, the British king, trying to appeal to Catherine’s monarchical sentiments, pleaded her to send 20-thousand Russian expeditionary corps to America to fight against the revolutionaries. The Russian Empress refused. Then the king tried to bribe Catherine by offering an island of Menorca in the Mediterranean Sea in exchange for convincing France to exit the war and thus forcing the American rebels to fight alone. And again, the offer was turned down.

Nowadays most Americans remember the French fighting alongside them in this nation-building war. Unfortunately, they are never reminded about Russia’s contribution to the U.S. independence.

The second most important conflict in America was the Civil War (1861-1865). This time, once again, Russia was on the right side of history.

We can draw some parallels between the two contemporaries, the first Republican President Abraham Lincoln and Russian Tsar Alexander II (also known as the Liberator). Both men initiated fundamental reforms to reconstruct their countries, both of them fought slavery. Alexander abolished serfdom in Russia in 1861, four years before the 13th Amendment was adopted in the United States. Another mysterious similarity, both rulers had a tragic destiny. Both men died for what they believed in. They were assassinated by terrorists.

Back to 1861, with the outbreak of the Civil War President Lincoln not only had to fight the Confederacy but also resist London and Paris plotting against the Union. This time France, pursuing its agenda in Mexico, betrayed the U.S. by secretly supplying the separatist South with weapons. And the United Kingdom, also guided by its self-interest, insidiously increased Confederacy’s legitimacy by recognizing it as a combatant party. By default, London and Paris were ready to join the war on the side of General Lee’s army. The major factor, which prevented it from happening was the position taken by the Russian Empire.

In 1863, Alexander II sent two Russian fleets under the command of Admirals Lessovski and Popov to New York and San Francisco in order to put pressure on London and fight the British navy if necessary. Russian ships patrolled the American shores for 10 months. Thus, Russia was the first European power, who officially supported the Union and President Lincoln. Soon the war was over. 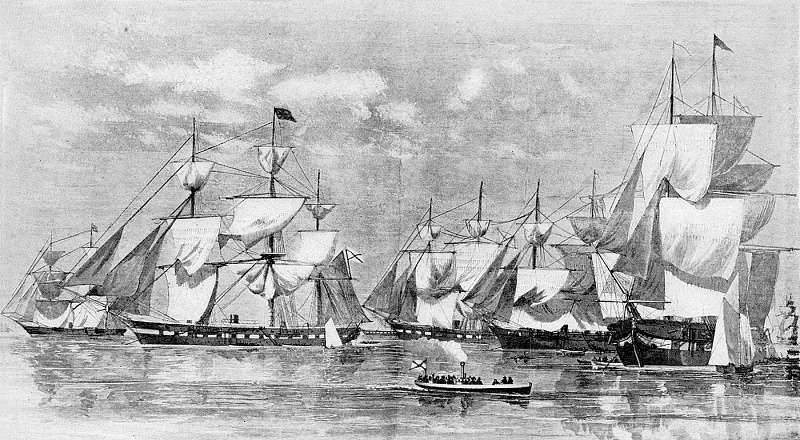 In 1867, Mark Twain came with the delegation of journalists to Saint Petersburg, where he was warmly welcomed by the Russian Tsar. The famous American writer characterized Russian people as friendly people.

Being deeply indebted to Russia, the American government in 1866 decided to send a special deputation to Petersburg to express to the Emperor and the Russian people the gratitude of the United States for the help provided by sending Russian fleets to America. The words, coined by an American diplomat Berg at an official reception organized a couple of years earlier in honor of the sailors who came to the side of the United States in its hour of need, happened to be prophetic: “There is a friendship between us that has not been overshadowed by any bad memories. It will continue, subject to the strict rule not to interfere in each other’s internal affairs. It is easy to imagine the enormous advantages that such a policy can give to all the governments of the globe if they carefully adhere to it."

Today it might be hard for our two countries to return to such an ideal state of affairs. Now Russian-American relations are overshadowed by lots of circumstances. This is why it is especially important to remember the positive moments of our common past. Twice in less than a century, Russia stood on behalf of the United States in its fight for freedom and unity. As much as Americans, Russians are always ready to fight for the right cause and for what they believe in.

Today, it's worth congratulating Americans as they celebrate their independence and the profound impact that American democracy has had on the world. At the same time, it's also worth remembering the instrumental role that Russia played in making the American experiment possible and that together the United States and Russia can do great things.

Our best days are not behind us.