Hinduism is native to Indian subcontinent. However, due to centuries long Muslim rule and British colonization, today’s India is the product of Hindu, Muslim and British cultural diffusion. The constitution of modern India ratified during 1976 declares India as a secular nation. Nevertheless, practice of secular model in India has been challenging due to the majority-minority tensions implying that, people belonging to Hindu-fold as majorities and the rest as minorities. Ever since the rise of Bharatiya Janata Party (BJP) specifically during 1990, 2014 and its second term during 2019, Hindutva as a political ideology is being manifested in Indian society referring as ‘Hindu nationalism.’ In this article, I attempt to explore the emergence of Hindu nationalism by illustrating the critical event which re-sparked the Hindutva ideology in contemporary history and subsequent consolidation of cultural, religious and political base. Secondly, I discuss on the ideological and political ambitions of Hindu nationalists. Lastly, I present the intrinsic challenges to Hindutva forces in achieving their goal. The key theoretical directions I use in this article are Critical Events, Nationalism and Power & Ideology. 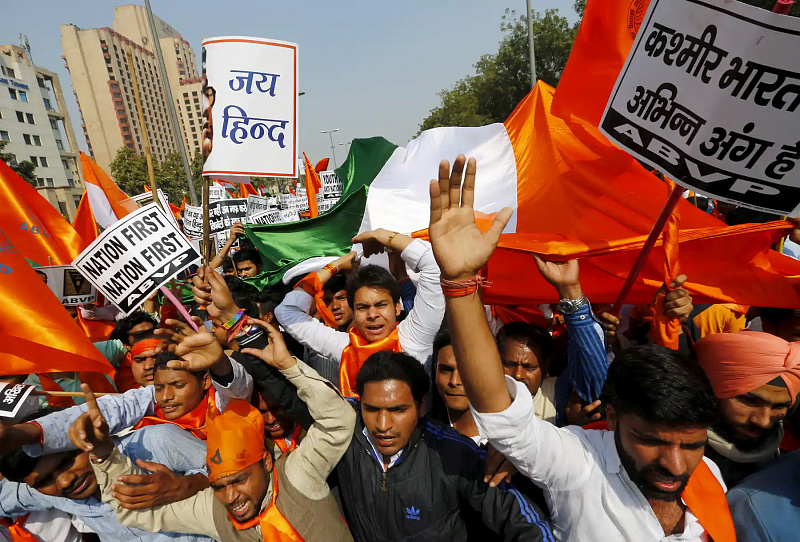 Kapferer (2010) spotlights ‘event’ as central to anthropological analysis, exploration of which opens range of critical dimensions in exploring social realities. A close investigation into ‘events or situated practices’ reveals the conflict, crisis and socio-political tensions at the heart of everyday life. The demolishment of Babri Mosque in 1992 was one of the ‘critical event’ that exacerbated the religious tensions and controversies across India. The wave of riots in the aftermath of destruction along with the rise of religious, right-wing politics- BJP has appealed on the study of Hindutva and Hindu Nationalism in recent years (Bhagavan, 2008; Sharma, 2011).

Anderson (2006) suggests the ‘anomaly’ of nationalism entailing that, the concept is merely a cultural artefact. There is a historical cultivation of such artefacts that follows certain trajectory and gets transplanted as a ‘modular’ prototype of self-consciousness which has a possibility of merging with certain political or ideological order. The grass-root organizations like Rashtriya Swayamsevak Sangh (RSS), Vishwa Hindu Parishad (VHP) along with the BJP have been displaying ‘Hindutva’ as an ideology based upon which Muslims and other minorities in India are delineated as ‘outsiders’ and could be assimilated into broader majoritarian national identity if they accept ‘national culture’. Even the mainstream economic ideas of the BJP government illustrate the Hindutva project that seem to regulate the behavior of its support base within the framework of Hindu nationalism (Chacko, 2019; Sharma, 2011). Thus, today, the nationalist discourse shaped by Hindutva forces is the manifestation of their ideological prototype and the social and political conditions of the Indian society.

Hindu nationalism has become a preeminent political force than ever before and has created substantial flux in the Indian politics. Sharma (2011) contends that, Hindu Nationalism is relatively a modern phenomenon and the resurgence of this could have happened due to the strains of battle between the tradition and the modernity. However, Hindutva has manifested in the form of assaults and brutality between Hindus and Muslims and other non-Hindus. The illustrations of religious intolerance, violence and riots has certainly evoked questions on the notion of India’s democratic, secular, and republican model. The rhetoric and action of ‘everyday Hindutva’ is seen expressed in the ideological and political ambitions of Hindu nationalists trying to press state apparatus to recognize Hinduism as the defining and deciding identity of India.

Althusser (1970) expresses ideology as a system of ideas and representations which dictates and commands the mind of individuals or a social group. Hindutva campaigners are interested to propagate their sphere of influence intervening the cultural and educational system. The key strategies include imparting textbooks at school with Hindutva interpretations, assign and impose certain books and generic interruption in the socio-cultural realm (Palshikar, 2015). Since 2014, Hindu nationalists appear to be more confident with BJP government-backing. The increasing presence of Hindutva ideology wing like RSS and its alliances are felt across the Indian society. These alliances have made inroads into the education policy, universities, cultural, economic, judicial institutions, and every other aspects of public life (Anderson & Arkotong, 2018). It is abundantly clear that the BJP and its allies are thriving to establish Hindutva as ruling ideology in India.

Geertz (1973) argues that ideology has ‘dualistic’ attitude opposing the real “we” to the evil “they”, asserting that one who is not with me is against me. It is ‘alienative’ in the sense that, it distrusts, attacks, and undermines the other forms of establishments. Further, it is ‘doctrainaire’ and ‘totalistic’ claiming to be complete, exclusive, bearing socio-political truth aiming to establish ideological order in the image of its ideals.

The social and political trajectories of the Sultanate and Mughal era followed by the British rule are considered as a threat to the purity of Indian-Subcontinent. Consequently, religious minorities belonging to the Muslim and Christian faiths are scaled as invaders and are perceived as treasonable subjects who needs to be disciplined and encompassed within the framework of Hindu polity (Mukta, 2000). However, these tactics of discursive formation has generated controversies regarding whether the Hindu identity should be equated with the national identity. The most dramatic and contentious moves are seen in campaigns that asserts the conversion of Muslims and Christians ‘back’ to Hinduism. These conversion campaign designated as ‘ghar wapsi’ meaning, ‘returning back home’ is argued not as conversion but a ‘reconversion’ implying that most of the Muslims and Christians who were ‘originally’ Hindus were forcefully converted through fraud and intimidation, and now, they could return back to Hindu fold once again (Palshikar, 2015).

Hindu nationalism today seems to be making its way towards ‘Hindu Renaissance’ reformulating and articulating the historical traditions. It is interesting to see the religious ideology being synthesized with the politics of BJP government and its subtle projection of religious nationalism- Hindu nationalism. In a slightly different tone, Chatterjee (1993) unfolds the rudimentary features of anticolonial nationalism. Here, the social institutions and practices are viewed in terms of ‘material’ and ‘spiritual’ domains. The former domain is the acknowledgement of the “outside”- state crafts, economy, and innovation. The latter is the domain of “inside” bearing the essential forms of cultural identity. BJP government looks tactical concerning its explicit emphasis on ‘material development’ and also carrying Hindutva agenda subtly.

Foucault (1991) transpires the concept of ‘governmentality’ which broadly speaks on the relationship between ‘the subject and power’. Precisely, governmentality is the operation to construct and compose governmentable subject. However, the superior idea is the ‘conduct of conducts’ entailing to conduct, command, control or to govern someone (or the subject). The political strategy of Hindu nationalists in India is not a smooth road. While trying to govern the state, they are inferred as being anti-secular carrying absolutist orientation to its minorities. There are emerging tensions between the theoretical narratives of secularism ratified in the Indian constitution and the political practices. The widespread inter-religious strife and religious prejudices is against the ideals of secularism envisioned in the Indian constitution. Consequently, the major challenge for the Indian state lies in bridging the gap with people belonging to different faiths, religion, and cultural traditions (Verma, 2016).

Hindutva as a political ideology has become more prominent with the rise of BJP’s government backing. Subsequently, there are increasing religious tensions and controversies across Indian society. Precisely, Muslims and other minorities are being delineated as ‘outsiders’ and victimized through organized violence at different moments. The radical activities of Hindu nationalists are seen in the areas of politics, education and culture promoting the Hindu ideals. It has certainly evoked questions on the notion of Indian secular model and its democratic principle. The ideological and political ambitions of installing Hindutva as a ruling ideology intervening the cultural and educational system seem to be highly contested in Indian culture and society. Hindu nationalists’ aim to ensure the dominance of Hinduism and its homogenized thinking is creating a series of religious strife and prejudices making it highly difficult for people belonging to non-Hindu fold. Thus, with the ongoing campaigns at different scale, it is becoming socially and politically intriguing to trace the trajectories of Hindu nationalists and their agendas.

Chatterjee, Partha. The Nation and its Fragments. Princeton University Press. Whose Imagined Community, 1993.