Shortly after Donald Trump unveiled his plan for the future of Israel and the Palestinians, known as the “Deal of the Century”, in which he presented a map outlining future borders of the states of Israel and Palestine. On January 30 2020, Prime Minister Benjamin Netanyahu flew to Moscow on an unannounced trip to update Russian President Vladimir Putin “on regional developments” and the “Deal of the Century”, following his meeting at the White House. This visit was especially important due to the close personal relationship existing between Putin and Netanyahu, despite the continuing tension among these leaders. Although Russia's current approach seeks to implement a balancing role with regards peace building in the Middle East, there is evidence that Russia may be maneuvering to reach an implicit agreement in relation to the Trump´s century deal. Therefore, this article pursues to examine Russia's approach to the Israeli-Palestinian conflict with emphasis on Trump´s plan.

After the collapse of the Soviet Union, Russia was economically and politically in distress and because of this Russians formulated a new strategy to increase their security as well as capacity to establish a counterbalance at the regional and international level. On this basis, Russia defined its national security strategy, whereby the Middle East was considered a strategic region and thus Russia's presence in the region was increased, positioning the country as a regional power. The reason for Russia's presence in the region was based on three important principles: 1) counteract U.S. unilateralism and 2) preventing its influence in the Central Asian and Caucasian regions; and finally, 3) fight against extremist and terrorist groups in cooperation with Iran and Turkey.

Russian growing presence in the Middle East since the beginning of the Arab spring back in 2011could be consider as an inflexion point for the power distribution in the region. Russia's military intervention in the Syrian conflict since 2015 caused a change of mentality and perception in all regional and extra-regional actors which became aware of Russia's strong influence on the crisis. Consequently, duet to its active and crucial air support to the Syrian government, it can be said that Russia was the main winner in the region. This led to a restructuration of the alliance policy in the Middle East, as regional powers reached out Russian side after the U.S. withdrawal from Syria and their lack of support to the Kurds, thus strengthening their relations. An example of this flip-flopping policy is Saudi Arabia. During the last few years, important meetings were held between the two countries' authorities, which eventually led to important economic (nuclear) and military-security agreements. Turkey, which has had a more tense relation with the U.S. and NATO during the last years, has significantly improved relations with Russia, hence Turkish President Erdogan is taking any action in northern Syria with Russian coordination. However, the most important country in this region is Israel. A country which has close cultural, political, economic and security ties with Russia, what makes Israel's security in Russia's Middle East policy more attractive.

Russian-Israeli relations have historical roots regarding the existing Jewish population in Russia and the Israeli population with Russian origin. Russia has sought to represent a mediating role in the Israeli-Palestinian conflict, seeking to encourage the interest of both sides with respect to permanent peace. Perhaps the most important aspect is the apparent cooperation between Russia and Israel in the Syrian conflict. Where Russia holds Syrian airspace open for Israeli attacks, which has been protested by Iranian and Bashar al-Assad forces. During a meeting with Putin, Netanyahu discussed the presence of Iranian and Hezbollah forces in southern Syria and the West Bank. This forced Putin to warn Iran and its forces not to get involved in military actions in the area. In 2005, President Putin was the first Russian president to visit Israel. Since then, Putin has referred to Israel as a “special state,” based on shared interests and a long history of collaboration. This is known as the “boxing strategy,” which allows Israel and Russia to set aside disagreements, separate their relationship from other strategic affiliations, and focus on seeking common ground.

Both countries have several shared interests. Including, avoiding incidents between Russian and Israeli armed forces in Syria; maintain stability in the Middle East; and conduct a similar approach to the above to deal with radical Islamic groups such as ISIS, Al Qaeda, and their affiliates. However, Israel and Russia have opposite views regarding the level of desirable American involvement in the Middle East. In addition, Russia cooperates with Iran in Syria, supplying weapons and defending the Joint Comprehensive Plan of Action (JCPOA), whereas Israel views Tehran as a primary threat and has undertaken a political-military campaign against it. On the Israeli-Palestinian conflict, Moscow and Jerusalem agree to disagree. In Russian eyes, Israel has the capability to disrupt the strategic architecture willing by Moscow in the Middle East, mainly through military activity and its influence in Washington. At the same time, Russia considers that Israel could also act as a possible channel of communication with the United States.

Before discussing Russia's approach to the conflict, let´s briefly discuss the century deal that Trump designed. US officials assure President Donald Trump’s long-awaited Middle East peace plan demands the eventual creation of a Palestinian state with its capital in portions of East Jerusalem. Ending speculation about whether his administration, in preparing a proposal without the contribution of Palestinian leaders, would abandon a “two-state resolution” to the conflict. This plan doubles the territory, which is currently under Palestinian control, although it also recognizes Israeli sovereignty over settlement in the West Bank. The Palestinians have already rejected the proposal, accusing Trump of being biased in favor of Israel as he has adopted policies that reinforce Israel at their expense. Under the terms of the “peace vision” that have been working on for nearly three years Trump’s son-in-law and senior adviser Jared Kushner; the future Palestinian state would consist according to the officials of the West Bank and Gaza, connected by a combination of above-ground roads and tunnels. The event comes as Trump’s impeachment trial continues in the Senate and Israel’s parliament had planned a hearing to discuss Netanyahu’s request for immunity from criminal corruption charges.

The Palestinians see the West Bank as the heartland of a future independent state and east Jerusalem as their capital. Most of the international community supports their position, but Trump has reversed decades of U.S. foreign policy by aligning more blatantly with Israel. The centerpiece of his strategy was recognizing Jerusalem as Israel’s capital and therefore move the American Embassy there. He has also closed Palestinian diplomatic offices in Washington and cut funds for Palestinian aid programs. However, the Palestinians even refuse to talk to Trump and they are asking for the support of the Arab leaders. The map below shows Trump´s plan: 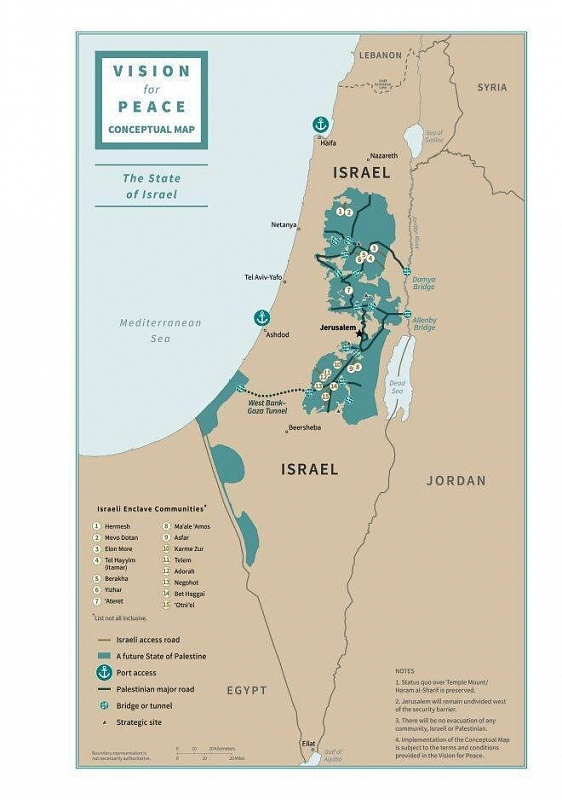 Nevertheless, what is important for Russia is to expand its role as a peacemaker and a fundamental actor in the Middle East settlement. Furthermore, Russia has struggled for several years to achieve a regional role in regional crises and to present its plans as a counterpart to U.S. approach. Nonetheless, the important issue is Israel's great influence in Russia. On the one hand, the issue on the role of the powerful Jewish lobby and investors in Russia, which makes Russia, worried about the pressure of the lobby. On the other hand, the Russians living in Israel, whom are a great concern to Putin especially respecting their safety. Russia is trying to play a greater role in the conflict, so Netanyahu traveled to Moscow to meet with Putin after meeting Trump. Russia, however, insists that the Palestinian side should be involved in the plan. Their absence probably will cause the project to fail in the short term. Russia's approach to the conflict is to prevent conflict again and achieve a peace in the Middle East in which everyone wins.

It seems that Trump’s Middle East peace team has dismissed the historical “blame game” as well as the contradictory narratives of the Palestinians and Israelis, who together have conspired to despise all previous attempts to find a viable solution. This approach is an acknowledgment that as the decades have pass with a solution to the conflict, circumstances continue to change. Apparently, Trump’s team in the Middle East appears to have found the concept viable, but the matter may be debatable, as it is difficult to see how the Deal of the Century can be implemented in view of the Palestinian total rejection of it. The Palestinians will certainly reject the approach and argue in favor of an agreement based on the two-state solution implemented in stages. Mahmoud Abbas, in a statement before the U.N. General Assembly in September 2015, said that the Palestinians “will not accept temporary solutions or a fragmented state”—a position which the Palestinians have held for many years and will likely continue to maintain in the future. The Israelis and Palestinians have been in a stalemate for too long and something must to change. The status quo is unsustainable, mainly for the Israelis but, to some extent, for the Palestinians as well. Both parties desperately need to return to the dialogue table to reach an agreement to ensure that their peoplelive in an endurable and safety peace. Finally, Israelis and Palestinians should seek Russian support if they want to resolve their age-old conflict. Russia seems to be a willing partner to promote a new deal that will end with a life of conflict in the Middle East.