Russian Services Have a Price

The Russian system for managing the Northern Sea Route (NSR) is angrily criticized by most interested foreign states for its lack of direct access to weather and navigation data, complicated procedures to request escort services etc. But the most sensitive issue is the NSR passage fee.

The Russian system for managing the Northern Sea Route (NSR) is angrily criticized by most interested foreign states for its lack of direct access to weather and navigation data, complicated procedures to request escort services etc. But the most sensitive issue is the NSR passage fee.

Basics of the NSR Tariff Policy in Russia's Law

Established unilaterally by the Russian side, the NSR passage fee is often seen by foreign ship owners as too high. Nevertheless, the financial regulation system for Arctic shipping is hardly discriminatory, if only due to the fact that during the several past years it has been steadily evolving to suit the ship owners' interests.

The first and most significant step in this direction was the cancellation of the outdated tariff framework for Russian icebreaker services. The July 26, 2005 executive order "On Tariffs for Icebreaker Services along the Northern Sea Route" of the Federal Tariffs Service (FTS) established rigid rates which did not always agree with foreign shipping companies. 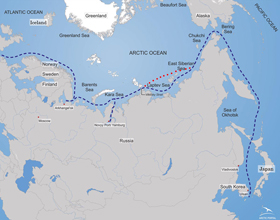 The situation changed in 2011, when at the beginning of the summer season the FTS adapted the executive order to introduce flexible tariffs. The rates remained intact but the wording included the key word maximum so as to offer the possibility of bargaining between the ship owner and the icebreaker operator within certain limits. Thiis allowed escort pricing to adapt to match the current parameters of the shipping market. According to Vladimir Mikhailichenko, Executive Director of the Noncommercial Partnership on Coordination of the NSR Use, it was this legislative innovation that brought success, with record figures on the East-West cargo transit totaling 835,000 tons in the summer and autumn of 2011.

The current state approach to NSR management also displays a stable trend toward reducing the number of tariffs.

Fees set by the Federal Law are not a medieval fiscal anachronism but compensation for specific services rendered to foreign companies by the Russian icebreaker operator.

For one, the draft Federal Law "On Amendments to Certain Russian Federation Legislative Acts for Commercial Shipping in the Arctic Ocean", approved by State Duma in the first reading in November 2011, envisaged three charges, namely Arctic shipping, icebreaker and ice piloting. But the final version adopted in late July 2012 contained only the second and the third fees. The arctic shipping charge was removed largely because of its outwardly discriminatory nature for ship owners. According to Ian Berlin, Vice-Governor of the Nenets Autonomous District, its presence would inevitably make the NSR deliveries more costly. 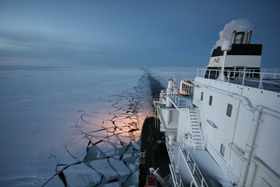 On July 21, 2012, one week before Vladimir Putin signed the Federal Law on the NSR, Russia joined the WTO, which raised the question of whether other WTO members may demand elimination of the NSR fees as they supposedly contradict the organization's basic principles, primarily that of free trade. Such attempts seem highly probable, first of all from free shipping advocates such as the USA, Japan and China. Among other things, the challenge is evident from the report on Arctic governance presented to the European Parliament on June 25, 2012. Its section on the NSR titled "North Passage" says: "There have been also worrying indications over the years that the Russian authorities would like to maximize the country's benefits by making compulsory the use of Russian ice-breakers to escort ships in certain sections of the Passage or by requiring Russian specialized personnel to be hired in the ships crossing the North Passage in order to supervise their safe navigation. Keeping in mind the long years during which European airlines have had to pay to the Russian authorities for the rights to fly over Siberia, the prospects are not too bright." [1]. Reduction of the trans-Siberian flight tariffs is already underway, with 2014 to see them cancelled. Will the NSR fees face the same future?

A Strategy to Legitimize Financial Regulation of NSR Shipping 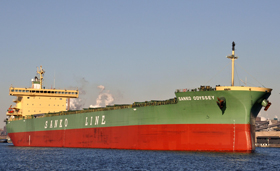 Photo: rus-shipping.ru
On August 31, 2011 the superbulker Sanko
Odyssey with a deadweight of 74,800 tons has
headed off from the Murmansk Seaport towards
the Asia Pacific Region.

Russia still has a chance to preserve the Arctic shipping fees, which requires Russia's Foreign Ministry to put forth a convincing justification resting on the international law of the sea recognized by all actors involved. The approach should hinge on the following components.

Point one seems the strongest: fees set by the Federal Law are not a medieval fiscal anachronism but compensation for specific services (icebreaker escort and ice piloting) rendered to foreign companies by the Russian icebreaker operator. Note that in this context the word specific is of paramount importance, as it refers to the two key articles of the 1982 UN Convention on the Law of the Sea honored by most interested states as the legal basis for governing Arctic resources. In particular, Article 26 of the Convention says that "charges may be levied upon a foreign ship passing through the territorial sea as payment only for specific services rendered to the ship.". At the same time, according to Article 127, "traffic in transit shall not be subject to any customs duties, taxes or other charges except charges levied for specific services rendered in connection with such traffic." (Both italics by the author.) These two provisions offer an unconditionally positive view of the legitimacy of Russian charges for the NSR passage. 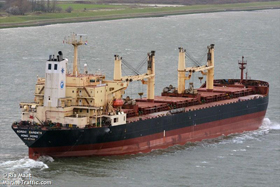 Photo: Ria Mat
"MV Nordic Barents" became the first non-Russian
flag vessel to sail the Northern Sea Route in transit
in 2010 from Kirkenes in Norway to a port in China

Finally, point number three: even in absence of heavy icing in summertime, a ship owner should not ignore the risk of situations when icebreaker escort becomes vital. The Arctic is rife with threats, among them drifting icebergs, one-year-old ice floes that are by no means less physically dangerous than drift ice, and unstable weather. This definitely provides sufficient rationale for cooperation with the icebreaker company Atomflot.