Iraq: What Comes Next?

Breakneck developments in Iraq after the intrusion of the Islamic State movement have triggered a chain of tragic events and radical changes in the Iraqi political arena. We asked Ambassador Extraordinary and Plenipotentiary Alexander Aksenyonok, PhD in Law, to comment on prospects in the near future and on the consequences of Baghdad's political decisions.

Breakneck developments in Iraq after the intrusion of the Islamic State movement have triggered a chain of tragic events and radical changes in the Iraqi political arena. We asked Ambassador Extraordinary and Plenipotentiary Alexander Aksenyonok, PhD in Law, to comment on prospects in the near future and on the consequences of Baghdad's political decisions.

Your Excellency, last week Haider al-Abadi, deputy speaker of parliament, was appointed prime minister of Iraq. In what way will this move affect the future development of the state? Will this new leader manage to form a national unity government so badly wanted by the foreign powers and prevent the breakup of the country?

The decision of Iraqi President Fuad Masum to charge Mr. al-Abadi with the formation of a new government appears quite constitutional. The country has been long full of mistrust and even hostile towards the regime of Nouri al-Maliki, which lacked Sunni and Kurdish support. In short, these sentiments could be described as "anyone but al-Maliki." 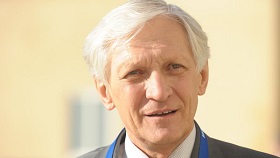 Mr. al-Abadi is a compromise figure selected out of the three or four prominent Sunni leaders fit to fill the premier position. He appeared preferable primarily because of his membership in the Islamic Dawa Party, the core of the ruling Shiite parliamentary coalition. Mr. al-Abadi is known in political circles to be short on charisma but good at building alliances and bridges beyond confessional attachments.

At the same time, the political crisis is unlikely to be settled soon. Violence has been steadily on the rise after the Americans left Iraq. Inter-confessional and inter-ethnic relations have been strained up to the point where threats are imminent to the entire structure of Iraqi statehood. In a situation like this, the restoration of trust, which is essential for the establishment of a broad-based national government, is extremely difficult, all the more during the 30 days specified by the national constitution. 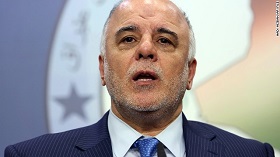 Mr. al-Abadi still lacks consolidated support from Sunni politicians, since his appointment has not come as a result of a consensus decision, but was rather forced by strong external pressure and the threat of the Caliphate proponents' advance. Some Sunni tribal and religious leaders also believe that the reshuffle will not change the situation, since the country will still be ruled by the Shiite political class which is tightly linked to Iran. Much will depend on how soon the sides can agree on the distribution of government posts and, even trickier, of commanding positions in the army, Ministry of Internal Affairs and security services which during the past several years were controlled personally by the prime minister. It is still hard to say what will prevail – the sense of common menace or confessional narrow-mindedness.

Should Iraq expect more foreign military aid and what are Baghdad's chances in the struggle against Islamists in the country's north?

As far as Iraq's domestic military and political environment is concerned, the army has proven ineffective against the Islamic State, with the Kurdish Peshmerga in the forefront, which has been somewhat successful with U.S. air support. But the Kurds lack heavy armaments and battle experience, while coordination between them and the Iraqi forces is yet to happen. 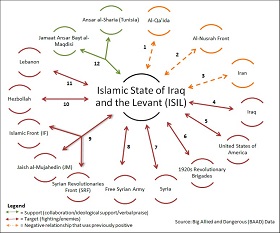 Aware of the grave threat coming from the Islamic International in Iraq and Syria, the United States and Europe launched military assistance to Iraq even before the formation of an inclusive government. They have provided Iraqi and Kurdish forces with weapons and intelligence, and also conducted air strikes. Washington has also pledged to send 400 military advisors and special operations troops. Moreover, the Kurds are receiving weapons from France. The logistics of aiding Iraq are under discussion in the United Kingdom, especially after American journalist James Foley was beheaded by an English speaker with a London accent.

Most experts agree that only a land force can nip the aggressive quasi-state in the bud, while Washington has declared that it does not have any plans for such military operations with its participation. Some have suggested the formation of certain regional coalitions to take up the job, but neighboring countries do not seem prepared for a direct military involvement despite their aversion to the Islamic Caliphate. Against this backdrop, there have been reports on confidential contacts between U.S. intelligence and Syrian authorities that had been labeled as illegitimate by President Obama three years ago. Damascus is doing its best to oppose the Islamists, but its forces are limited and dispersed over several fronts.

What kind of foreign policy challenges will Mr. al-Abadi face? What appear to be the prospects for Iraq's relations with neighboring states, the U.S. and other Western powers? 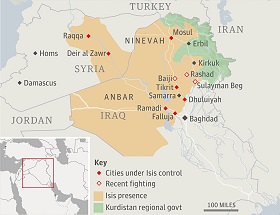 Should Mr. al-Abadi form a representative government, apart from domestic problems, he will have to find a more nuanced international balance. After U.S, troops had left Iraq, Mr. al-Maliki dared to display a degree of independence, sometimes shunning Washington. Baghdad even ventured to grow closer to Damascus and Tehran, which almost ruptured its relations with Riyadh for whom Mr. al-Maliki became absolutely unacceptable. The Arabian monarchies see Iraq as a link in the Shiite axis incorporating Hezbollah in Lebanon, Bashar Assad's regime in Syria and Iran.

The future relations of Iraq with its neighbors and its overall prospects as a state will to a great extent hinge on current regional trends, first of all in the U.S.-Iran-Saudi Arabia triangle. Such factors as the American-Iranian thaw, continued talks on Tehran's nuclear dossier and the strengthening of the Syrian regime vis-à-vis the domestic opposition have driven Riyadh to make cautious amendments to its Tehran policy. Iranians also are sending messages about their readiness for rapprochement. Although a major breakthrough is still a pie in the sky, the Iranian foreign ministry appears overtly happy about "normalization" with Saudi Arabia.

Quite meaningful in the emerging regional arrangement appears to be Turkey, Iraq's influential neighbor that has historically been opposed to self-determination and independence for the Kurds. Under the new situation, Kurdistan appears to be emerging as a moderate regional actor warring against terrorism. Since Kurdistan is increasingly seen by the West in this capacity, Ankara, which has maintained a fairly balanced relationship with Baghdad, may become deeply interested in overcoming the political crisis in order to prevent the aggravation of the Kurdish problem at home.

Rate this article
Share this article
FOLLOW THE LATEST DEVELOPMENTS
Project
Security System in the Middle East
Tags
Iraq, Kurdistan, ISIL, Haider al-Abadi
Reader's choice
HideShow
Results of 2021: Sanctions Policy
Development Aid: What If We Need to Re-Think the Concept?
A Country Unprepared for Elections
RIAC at the Online Seminar Dedicated to the Role of the UN in Libya
Iran and Eurasian Economic Union Negotiations: Upgrading EAEU-Iran Preferential Trade Agreement into a Free Trade Agreement