A Palestinian State – what is behind the facade?

Department of International Relations and Foreign Policy of Russia, MGIMO-University

In 2011, Palestine applied for a full membership in the United Nations. Broad international support for this move forced the USA to proclaim its determination to veto this move in the Security Council. Meanwhile, the impasse in the Palestinian-Israeli dialogue, and the still fragile peace between Fatah and Hamas, promise no quick progress either in Palestine’s entry into the UN, or in the real state building of houses in the occupied territories.

In 2011, Palestine applied for a full membership in the United Nations. Broad international support for this move forced the USA to proclaim its determination to veto this move in the Security Council.

Meanwhile, the impasse in the Palestinian-Israeli dialogue, and the still fragile peace between Fatah and Hamas, promise no quick progress either in Palestine’s entry into the UN, or in the real state building of houses in the occupied territories.

On September 23, 2011, Mahmoud Abbas, the President of the Palestinian National Authority (PNA), officially applied for Palestinian full membership in the UN.

At that time, according to various sources, the Palestinian State has already been recognized by 110 to 130 UN member states. A little later, in November 2011, Palestine became the 195th full member of UNESCO.

Had the application of Palestinians passed through the Security Council, and came for consideration at the General Assembly, it was most likely that the required 2/3 members of the GA would have voted for it. To avoid such a scenario, the USA was forced to announce that it would veto any Palestinian UN bid in the Security Council. President Obama informed Abbas about this personally.

The intermediate results of Palestine’s entry into the UN demonstrate the growing support for the Palestinians around the world. However, the absence of a UN membership is not only and not the main obstacle facing the Palestinian statehood.

Payment of salaries to civil workers, employees of security bodies, and fulfillment of the PNA’s social obligations are at the moment entirely dependent on regular donations from abroad.

There are other several groups of fundamental problems that the PNA has not yet been able to resolve. First, this concerns socio-economic and institutional problems, security “deficit” and Palestine’s high dependence on a turbulent regional state of affairs.

When it comes to the economy, at first glance in terms of GDP ($2900 per capita in 2008) and the level of poverty (in 2009, 22% of the population of PNA lived below the poverty line). looks better than many Arab countries. 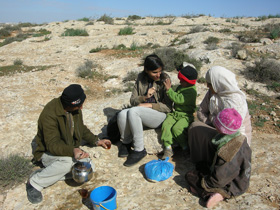 However, the PNA problem is not a problem in absolute terms, but a problem of an extremely unstable macroeconomic development. The economic life of the occupied territories is entirely dependent on external situation, particularly political ones.

Whereas in 1994 to 1999 (in the background of the “Oslo Process”), Palestine’s per capita GDP gradually increased, there was a rapid contraction of the local economy from 2000 to 2007 (Second Intifada, blockade of the Gaza Strip, etc.).

The Gaza Strip is in a particularly difficult situation. As of 2011, local per capita GDP was still 35% below the 1994 level.

Both in Gaza and in the West Bank rapid growth of population could be observed during all these years. Whereas in 1994, the population of Palestine was 2 million 366 thousand people, in 2010 the figure reached 4 million 152 thousand.

Such demographic trend, coupled with the above-mentioned economic problems, provokes a rise in unemployment. In 2009, 24.5% of the working population of the PNA was unemployed. This figure is even higher among the youths – 29% in 2011.

As a result, many Palestinians were forced to look for work abroad, and primarily in Israel. Remittances from abroad (about $400 million in 2005) continue playing an important role in the lives of Palestinians.

The economic crisis of the 2000s led to an imbalance in the PNA budget. In the 2008 budget, the PNA expenditure commitments were 60% higher than the amount of income. Only a massive foreign aid could cover such a deficit.

By the decision of donor countries adopted at a conference in Paris in December 2007, Palestine received international aid worth $7.7 billion between 2008 and 2010.

Thus, payment of salaries to civil workers, employees of security bodies, and fulfillment of the PNA’s social obligations are at the moment entirely dependent on regular donations from abroad.

At the same time, donor countries regularly use the issue of providing subsidies as a tool for pressurizing the Palestinians. Thus, in response to the decision by M. Abbas to apply for Palestine entry to the UN, the U.S. Congress froze the transfer in the amount of $ 200 million of financial aid to the Autonomy.

In these circumstances, it is still difficult to talk about the economic viability and independence of a Palestinian State.

High political competition between Fatah and Hamas did not lead to progress, but rather to a regression of the Palestinian statehood.

Institutional problems are equally important problems that face the Palestinians.

As of 2012, PNA does not have effective government institutions, there is no necessary legal framework established by management practices.

The consequences of the 2006 parliamentary elections, won by Hamas, particularly and clearly demonstrated the problem of institutions.

High political competition between Fatah and Hamas did not lead to progress, but rather to a regression of the Palestinian statehood, is in fact, contributed to the outbreak of the civil war, social and territorial division in the Autonomy (Hamas in Gaza and Fatah in the West Bank), which is yet to overcome.

It can be stated that after the 2006 election, the Autonomy came to a state of permanent political crisis.

This crisis periodically worsens and then is followed by attempts to overcome it. The most recent of these attempts was on December 2011, when Abbas and Haniya signed an agreement on national reconciliation in Cairo. However, in view of previous negative experiences, the strength of this agreement is in doubt.

As of today, the Palestinian-Israeli dialogue is in fact terminated. The peace process is frozen. Attempts to seat the Palestinians and Israelis to the negotiating table have failed.

Israel continues expanding settlements beyond the 1967 borders, paying no attention to the almost ritual criticism of the international community.

Thus, the Jerusalem District authorities in December 2011 approved a plan to build 130 houses in the Gilo settlement. 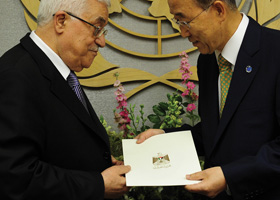 Photo: www.executive-magazine.com
Palestinian request for a membership in the UN

There are no visible prospects for exit from the impasse, and progress in addressing key issues of the Israeli-Palestinian settlement (Jerusalem and the 1967 borders).

Another factor undermining the security of the Autonomy is its traditionally high dependence on the situation in neighboring Arab countries. The largest of them – Egypt and Syria – plunged into the abyss of the “Arab Spring” in 2011. The uncertainty there has not yet started showing on the Israeli-Palestinian context. (Rather, on the contrary the positive experience of the Hamas movement, which in its time won the elections in the PNA, today encourages the Egyptian and Syrian Islamists). However, at some point, this must start. It is highly likely that the “Arab Spring” will lead to an increased Islamist hostility towards Israel in the Arab region.

The new regional trends are unlikely to be able to bring Palestine nearer to the UN or to a compromise with Israel. Rather, we can expect a new round of confrontation and aggravation of the “security deficit” in Palestine.

Oddly enough, all these and many other problems are almost not related to the prospects of further expansion of the circle that have recognized the Palestinian State.

In the late 1980s, the newly proclaimed State of Palestine was recognized by the Arab countries, as well as by a large group of Soviet bloc countries and the Non-Aligned Movement countries.

The Palestinian State was also recognized by the Soviet Union, the successor of which, including in regard of this, is the Russian Federation.

In the midst of battles around Palestine’s accession to the UN, Foreign Minister Sergey Lavrov articulated Russia’s position – the issue of the State of Palestine status has long been resolved, and resolved in the affirmative manner. Lavrov also declared Russia’s support for the Palestinian bid to join the UN, focusing on the need to resume the Palestinian-Israeli negotiations.

Then, between the 1990s and early 2000s, the process of recognition continued, and entered the Latin American continent.

Currently, Europe is the most promising “front of work” in this regard.

The idea of recognizing a Palestinian State enjoys broad support among European policy-makers, experts and intellectuals.

An evidence of this support was, for example, the triumphant speech by Mahmoud Abbas at the PACE session in October 2011, following which the parliamentarians urged European governments, including those in the Security Council, to support the Palestinian request for a full membership in the UN.

In November 2011 came the long-awaited recognition of Palestine by the first Western European country – Iceland.

The spread of this “fashion” in the European Union was obviously prevented firstly by EU’s desire to demonstrate unanimity on at least some foreign policy issues, which in the Palestinian case was not achieved, and secondly by the deep crisis in the eurozone, which broke out in 2011-2012, and shifted foreign policy issues to the background of Europe’s agenda.

Nevertheless, one can expect that as interest in foreign policy revives, Brussels and other European capitals will return to the Palestinian issue. The public opinion, which is in favor of Palestinians, will push them towards that.

Europe’s drift towards a pro-Palestinian position means the further strengthening of the pro-independence camp, and Palestine’s UN status.

Thus, the Palestinian State is currently developing by two divergent vectors. The sympathy and commitment of the international community towards it is growing. But at the same time, Palestine itself does not seem to have enhanced its readiness for that in terms of institutional, political and socio-economic aspects.

In this situation, the Palestinian State is likely to continue increasing the formal attributes of independence. From the status and psychological points of view, this process can partially compensate the Palestinians for the failure to resolve their internal problems.

Rate this article
Share this article
FOLLOW THE LATEST DEVELOPMENTS
Project
Security System in the Middle East
Tags
Palestine, UN, Israel
Reader's choice
HideShow
Restoration, Reformation, Revolution? Blueprints for the World Order after the Russia-Ukraine conflict
JCPOA 1.01: Now or Never
Presentation of the Book on Modern Economic Legislation of the Arab Countries at the SHPL
International Regulation of Private Military and Security Companies