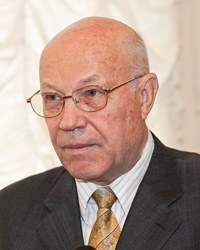 Honorary President of the Institute for African Studies of the RAS.

Graduated from the Moscow State Institute of International Relations (MGIMO) of the USSR Ministry of Foreign Affairs (MFA).

RAS Full Member, laureate of the "Distinguished Scientist of the Russian Federation" award.

Was posted as a daily correspondent for the Pravda newspaper in Vietnam, Turkey, Egypt and other countries. Later became Deputy Director of the RAS Institute of Africa.

From 2006 to 2011, was Special Representative of the Russian President for Relations with Leaders of African Countries.

Member of the international security section of the Russian Federation (RF) Security Council.

Member of the Foreign Policy Council of the RF MFA.

Editor-in-Chief of the Asia and Africa Today journal.

Author of 35 books and over 900 publications in academic journals.

Academic focus: recent social and political history and current affairs of nations in the Middle East and Central Asia.

Cooperation between the Russian Federation and the Arab Republic of Egypt: Opportunities and…
Aleksey Vasilyev

Africa is needed for Africans, Russia and the world