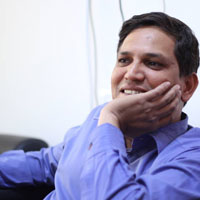 Поделиться
Ratnesh Dwivedi transferred his skills of media industry in to his passion for writing and teaching. He has seen changing face of Indian media as a struggler and budding media professional.Later he switched in to academics and love to be categorized as a prolific writer,analyst and academician. He has been teaching to graduate and post graduate students of Media and Communication in Indian Universities and Institutions for past thirteen years,however he specializes in Broadcast Journalism. He has been associated with Amity University,where he led a project to set up Community Radio Station and TV Studio apart from his teaching assignment.He is widely published academician in the field of Media and Communication with nearly 30 publications and presentation in countries like Russia, Ukraine, Kazakhstan, Germany, Slovinia, Chzeck, Britain, USA and India with nearly 7000 downloads, which itself is a record. He has authored five books. The Story of an Intern is a reportage book of struggle of an Intern in big bad media world, while The Cosmic Mask is a compilation of nine space fiction stories which he self published with an Amazon company.Third and fourth are awarded academic books. His fifth book on US Intelligence and Cost of War is in print. He frequently comments and write on Global Affairs.He is Charter member of Bush Center,Texas,Chapter Member of Internet Society,Virginia, Institute of English Studies, University of London , member with world's largest media professionals organizations like ECREA, Brussels and RTDNA,Wash,D.C. He is also member with intelligence think tank Mission Essential, Virginia, and Carnegie Council's Global Ethics Network, NY, USA. He has attended NASA workshops & courses and conducts NASA's essay contest in Indian Schools. He is Research Manager with a China based IPR firm. He lives in New Delhi with his wife and son.