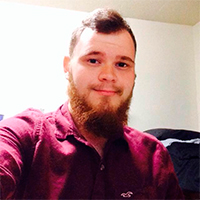 Allen was born in Houston, Texas, and was raised in Dayton, a small town nearby. In 2014, after completing two years at Lone Star college, Allen moved to Denton, near Dallas, to attend the University of North Texas. In his spare time, he enjoys travelling throughout Russia and Europe; snowboarding; and spending long nights drinking cherry ale with friends and those he meets in his travels. Allen became interested in international affairs after spending his high school years participating in policy debate and playing the video game, Eve Online.