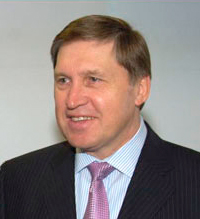 Graduated from the Moscow State Institute of International Relations (MGIMO) of the USSR Ministry of Foreign Affairs. Holds a Ph.D. degree in History.

Served at the USSR Ministry of Foreign Affairs, and was posted on a number of overseas diplomatic missions. Director of the Department of Pan-European cooperation; worked at the Soviet embassy in Denmark; Permanent Representative of the Russian Federation in the OSCE; Deputy Minister of Foreign Affairs; Ambassador Extraordinary and Plenipotentiary to the USA; Permanent Observer at the Organization of American States; Deputy Head of the Governmental Apparatus of the Russian Federation.

Since May 2012, Aide to the President of the Russian Federation in charge of foreign policy.