EAEU and Eurasia: Monitoring and Analysis of Direct Investments 2017 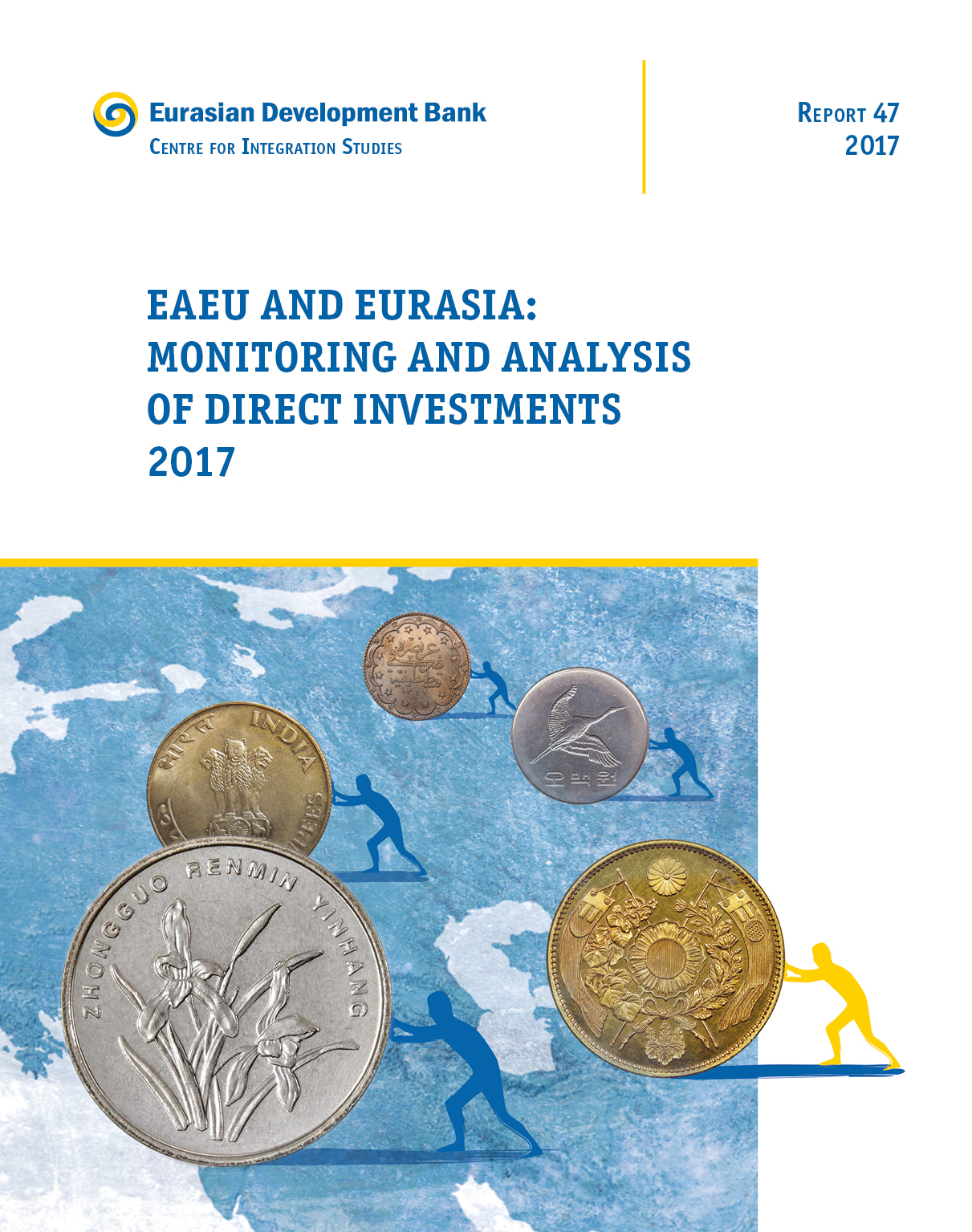 According to the new findings of the ongoing research project, Asian investors continue to increase direct investments in the EAEU. During the monitoring period (2008–2016), FDI stock originating from 12 Asian countries (China, Japan, Turkey, India, Israel, Mongolia, Republic of Korea, Saudi Arabia, the UAE, Iran, Singapore, and Vietnam) has increased from $32 billion in 2008 to $75.6 billion in the beginning of 2017.

China continues to expand its economic presence in EAEU countries and other CIS states, retaining its leadership among Asian countries in terms of FDI stock in the region. At the end of 2016, FDI stock accumulated by Chinese TNCs in the five EAEU countries, Azerbaijan, Tajikistan, and Ukraine amounted to $33.7 billion, a 12.7% year-on-year increase. The bulk of direct capital investments originating from China is concentrated in Kazakhstan, with an FDI stock of $21.5 billion.

Japan maintains the largest FDI stock in Russia among Asian countries. In 2016, the Russian economy received $15.1 billion of Japanese FDI compared to $14.8 billion in 2015.

Against the background of creation of an EAEU-Vietnam free trade area and a possible start of negotiations on a free trade agreement between the EAEU and Singapore, these Southeast Asian states have been showing more and more interest in EAEU economies.

Regarding outward FDI originating from the EAEU all countries of the Union without exception continue to boost their outward investments in Eurasia beyond the CIS. In 2016, that indicator went up by 4% ($3.6 billion) to $93 billion. In 2008–2016, total FDI stock by EAEU countries in Eurasia has grown by a factor of 2.5. European countries remain the main destination for outward direct capital investments originating from the EAEU.

According to EDB Centre for Integration Studies’ analysts, the significant growth of FDI in Russia and other EAEU member states is expected in 2018 against the backdrop of execution of several agreements between Russian oil and gas companies and their Chinese partners, and keen interest displayed by Asian investors in Eurasian economies. This will reinforce the "turn-to-the-East" trend which manifests itself in the heightened intensification of cooperation between the EAEU and Asian countries.

More information about the report and its summary could be found on the Eurasian Development Bank’s website at: “EAEU and Eurasia: Monitoring and Analysis of Direct Investments 2017”.

List of tables and figures
Acronyms and abbreviations
Summary
Introduction
1 Description of the Dim-Eurasia Database
1.1 Scale and Evolution of FDI Recorded in the DIM-Eurasia Database
1.2 Main Parameters of Investment Projects in the DIM-Eurasia Database
2 DIRECT INVESTMENTS BY CIS COUNTRIES IN THE EURASIAN CONTINENT
2.1 Distinguishing Features of Russian FDI in Eurasian Countries
2.2 FDI in Eurasia Originating from Other EAEU Countries
2.3 Azerbaijani Investments: Domination of Companies with State Equity Participation
2.4 Ukrainian FDI as a Reflection of the Situation in the Country
3 Direct Investments by Eurasian Countries in the Post-Soviet Area
3.1 Dutch FDI: Local TNCs vs Foreign Holdings
3.2 “Return” of Austrian FDI to Russia and Other CIS Countries
3.3 Significance of Investment Cooperation between the EAEU and Serbia
3.4 Chinese FDI in the Post-Soviet Area
3.5 FDI Originating from Other Northeast Asian Countries
3.6 Vietnamese and Singaporean FDI in CIS Countries: Prospects
3.7 Indian FDI in CIS Countries: Underutilised Potential
3.8 Turkish FDI: Overcoming Negative Political Consequences
3.9 FDI Originating from Other Middle Eastern Countries
Conclusion
References