Canada at 150: The Main Trends 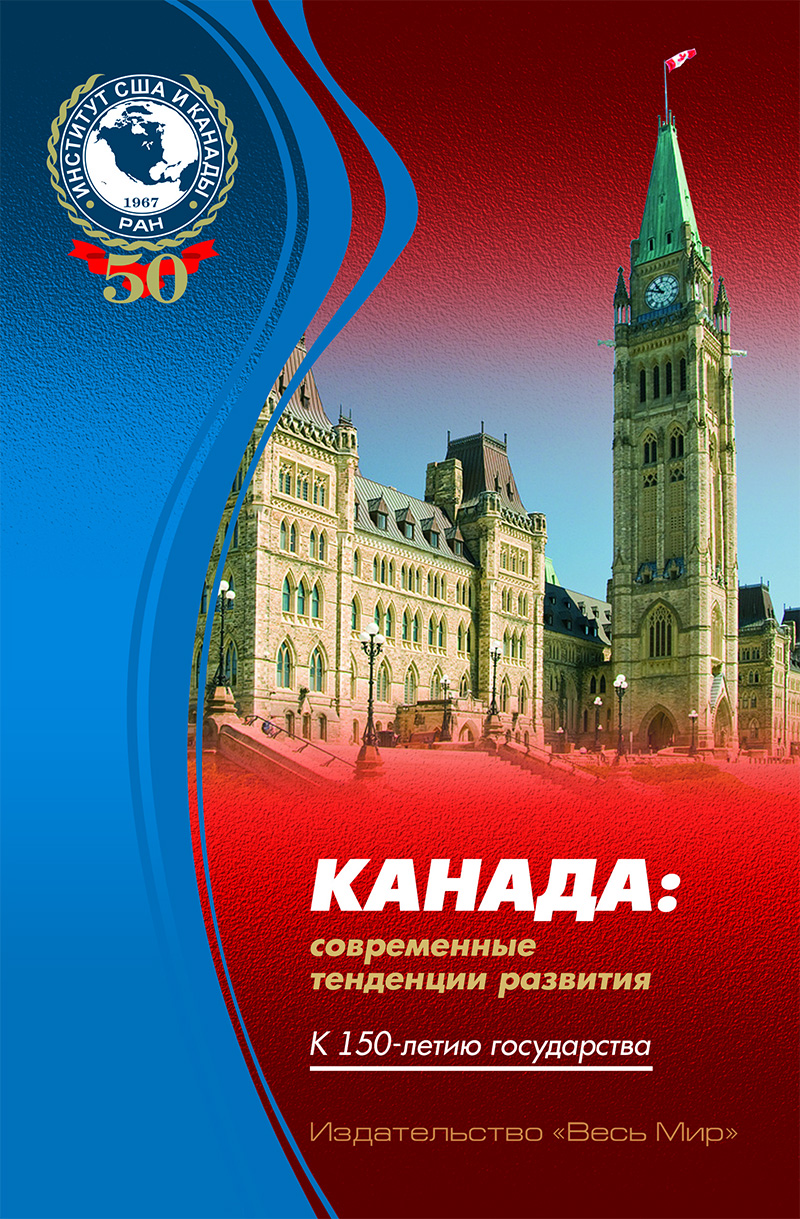 This book is a product of a multidisciplinary study of the main recent developments in Canada’s political, economic, and social life. Drawing on the earlier collective and individual studies, the authors have focused on the ongoing processes shaping the country’s near future.

The four years since the previous collective monograph of a similar kind was published, have seen many dramatic changes both in Canada and in the world. Reflecting major shifts in the balance of political forces and voters’ preferences, the 2015 general election, as well as provincial elections, have resulted in the Conservative Party’s electoral defeats at the federal level and in the biggest provinces. At the same time Canada’s economic growth has slowed down dramatically as the country’s resource industries, which had served as the main economic locomotive for more than a decade, “lost steam” since 2014. In the following two years the real GDP growth was the slowest in six decades, periods of recessions not counting. A lengthy presidential election campaign in the United States and the highly controversial initial decisions and statements of the new American President Donald Trump have brought a lot of uncertainty into Canada’s relationship with its most important economic and geopolitical partner. Canada has been facing controversial outcomes of its increased efforts to diversify trade and investment links with countries outside North America. Recent developments in the international political arena have raised concerns about the prospects of a decline in Canada’s relative power in the world. The new Canadian government has been altering approaches to dealing with some major domestic and international issues.

These are some of the most important themes in today’s Canadian studies that might be of interest to the Russian academic community as well as to the wider public. Certain parts of the book might also be useful for Russian economic and financial regulators, as well as owners and managers of the Russian companies, which have been maintaining business ties, or seeking to re-establish them, with the partners in Canada.

The authors also hope that at the time when our “neighbor across the North Pole” is celebrating 150th anniversary, the book would attract many other readers wishing to expand their knowledge and comprehension of Canadian realities.

Most of the authors have dedicated decades of their professional lives to studying Canada. They have visited the country as researchers and professors many times, actively participated in the establishment and development of academic and educational exchanges, organized bilateral and international conferences and seminars, as well as helped build economic and cultural links between our two countries. Many authors of this book are graduates of the PhD Program at the Institute of the USA and Canada Studies (ISCRAN), a renowned research institution within the Russian Academy of Sciences. Almost all of them are working as research fellows at ISCRAN’s Canadian Department and teaching courses on Canada at various universities in Russia. While Canada is celebrating its 150th anniversary in 2017, ISCRAN is marking its 50th year of existence, and it is 45 years since the Canadian Department was established as part of this research centre widely known in Russia and abroad.

A brief Introduction outlines Canada’s main achievements as well as problems on its way from a British colony to becoming a post-industrial democratic state and a member of the “elite club” of the seven leading Western economies. The following chapters are grouped in six parts: “Political power: traditions and expectations”, “New trends in economic development”, “Canada’s external economic relations in the 21st century”, “Main priorities and directions of foreign policy”, “Culture and society”, “Russian-Canadian relations: the present stage”.

Part V. Culture and society
Chapter 19. Multiculturalism as the cornerstone of national identity (A.A. Nikolayeva, V.I. Sokolov)
Chapter 20. The Canadian brand on the world cultural stage (T.A. Shchukina)
Chapter 21. The rules of the game and the diplomatic culture in the Canada-U.S. model of asymmetrical relationship ( E.G. Komkova)

Canada at 150: the main trends. Overview in English. (L.A. Nemova)
About the authors