On 22–24 June, 2021, the IX Moscow Conference on International Security was held in Moscow, Russia. High-level delegations from more than eighty countries attended it. The agenda of the conference included the most urgent problems and trends in the field on international military policy, the COVID-19 pandemic and its impact, security cooperation, and building consensus on the future course of actions and strategies to overcome the international threats, instabilities and hegemonies. A wide range of issues were discussed in-depth, and participants have contributed a lot in promoting cooperation, understanding and building consensus. Russia’s Ministry of Defense organized the two-day event, and the success of the conference could be credited to the Russian visionary leadership.

It was suggested that the U.S. should shed the old notion of maintaining hegemony and cooperate with countries to find common solutions for global threats. It will help the rest of the world in leading a peaceful life and come to benefit the American public as the role of hegemonozing the world has created anti-American sentiments and hate against Americans generally. A change in American policies may benefit the American public more. 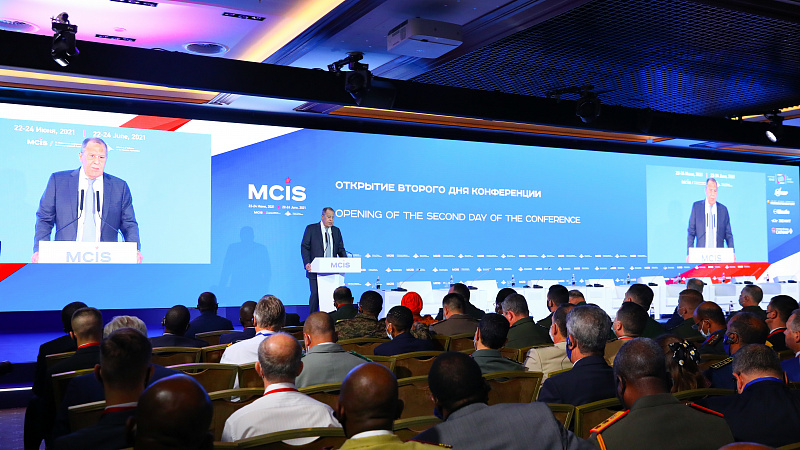 The U.S. global missile defense is a factor of insecurity in the world, and a possible arms race is certainly not in the general public’s interest on either side. Therefore, the world must seek to commit the United States to limit its missile defense segment in Europe and the Asia Pacific immediately.

Recently, Russia has emerged as a pivotal player in unifying nations and resolving global challenges collectively. Small countries in the region are looking at Russia as a ray of hope and seeking protection against the global threats imposed by the U.S. and its allies. Thus, there should be the restoration of the system under international agreements under the auspices of international law. This will pave the way for countries to cooperate at a broader level. The Russian role should promote collaboration and cooperation, defuse tensions and confrontation, both regionally and globally. Mechanisms should be devised to prevent wars, conflicts, aggressions, coercions, instances of power politics, and a rule-based system under the umbrella of the United Nations should be advanced.

In the last few decades, terrorism was witnessed around the globe but the biased media have been projecting a distorted form of terrorism and using it as a tool and justification for their aggressive acts. The U.S. was over-engaged in the Muslim world under cover of the war-on-terror. It is time to define the term terrorism precisely. The most condemnable form of terrorism was “state-sponosored terrorism,” and the U.S. was responsible for acts of agression against the Muslim world. The U.S. must be trialled for war crimes and should be held responsible for the destruction of many Muslim countries like Iraq, Libya, Syria, Yemen, Afghanistan and pay war compensation for the reconstruction of all the damged countries. A standard policy should be followed to judge terrorism under the U.N. charter and recognized by all nations on the basis of consensus. No single country should be allowed to declare any act or organization or state terrorist.

The U.S. has been using sanctions to punish its adversaries and influence the U.N. to impose such sanctions. As a result, nations suffered a lot, but the real objectives of imposing sanctions were never achieved. It is time to devise a system to pressurize nations under the U.N. charter. No single country should decide or influence others for imposing sanctions unilaterally.

All countries and nations should establish confidence-building measures (CBM) and devise policies that can lead to collaborations and cooperation to ensure strategic stability. Common interests and mutual trusts will bring nations closer and diffuse tensions. We must seek fairness and justice, keep shared values as these are significant aspects for achieving peace, stability, sustainable development, progress and prosperity of the whole of humankind.

The COVID-19 pandemic has emerged as a global menace. The challenge is so huge that no single country can overcome it. It requires collective efforts, and all nations should cooperate with developed countries. No one is safe unless the whole world is vaccinated and COVID-free. A collective initiative must be started, and comprehensive measures must be placed on the ground.

The Afghan situation remained the center of formal and informal discussion among the conference delegates. A majority of participants blamed flawed United States policies for the deteriorated situation in Afghanistan. A stable, peaceful and strong Afghanistan is a prerequisite for regional peace, stability, development and prosperity. Afghanistan is situated at the junctions of ancient trade routes connecting Central Asia, South Asia, East Asia, Eurasia, Russia, China, and through Gwadar-Pakistan to the Middle East, Africa and Europe. Afghan peace is crucial for the whole region.