Just How Far to Back Off on Iran?

Print
Over the past few months, tensions between the U.S. and Iran have increased in tit-for-tat escalation.

After the U.S. accused Iran of attacking ships in the Gulf of Oman, Iran’s denial has merely followed their alleged second strike in a few months on Gulf shipping. Attacks targeted oil tankers and vessels belonging to Saudi Arabia, the United Arab Emirates, Japan, Norway (all allies of the U.S.) traveling through the Strait of Hormuz, a vital passage patrolled by Iran. 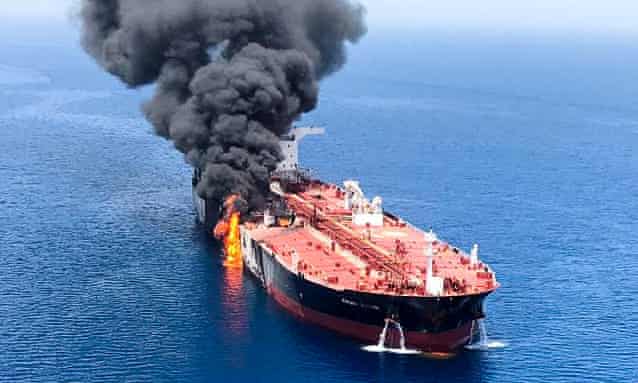 An oil tanker burns after the attack on 13 June in waters between Gulf Arab states and Iran. Photograph: Reuters

Iran shot down a U.S. drone claiming it had crossed into Iran’s territory. The Trump administration denies the U.S. disregarding Iranian territory citing that the drone was flying in international airspace. U.S. President Donald Trump threatened a military strike on Iran, calling it off 10 minutes before it was proposed to happen. The U.S. supposedly conducted an attack on Iran’s computer systems; the success of the attack could only be measured if the U.S. were able to observe Iran try to launch a missile. Iran’s Fars News Agency said the attack was simply a hoax meant to garner reputation for the U.S. in the White House.

The U.S. is moving new troops to the region with the specific aim of defending against Iran.

Regardless of what may be rumor or accusation, there is no denying that the U.S. and Iran take to warring (if not literally) with postures and threats as each see the other’s influence in the Middle East as totally malign.

Though, the U.S. does not seek conflict with Iran. President Trump is not throwing in the towel on diplomatic efforts to resolve tensions despite the absence of direct talks between U.S. and Iranian leaders. Iran’s Supreme Leader Ayatollah Ali Khamenei, however, did stop the prospect of diplomacy on June 26 when he said the U.S. is the “most vicious government of the world” and that "negotiation is an effort to deceive [Iran] into doing what the U.S. desires."

A few days later, on June 28 at the G-20 summit in Osaka Russian President Vladimir Putin met with Trump. The significance? Russia stands as one of the few and most viable resources for the U.S. regarding Iran where Trump seems to have few if any alternatives short of worsened sanctions or conflict. For months U.S. policy towards Iran has been a “maximum pressure” campaign meant to effectively cut Iran’s oil revenue the effects of which has given rise to ever-increasing escalation. Moscow would not favor direct confrontation between Iran and the U.S. which makes Putin one of the only potential mediators left who could both prevent the collapse of the Joint Comprehensive Plan of Action (JCPOA) or a conflict spiral in the Middle East. The question remains: would Russia accept employment for this and, if so, what would they ask in return for diplomatic mediation? Ultimately, will other options present themselves on Iran to the United States? The unknowns to these unanswered questions pose for varying degrees of concern.

Why Moscow? Why Now?

All roads have a way of leading to Syria when it comes to current conflicts in the Middle East. In Syria, Israel and Iran utilize proxy fighting in their regional dispute. Neither power welcomes the presence of the other as threats between the two perpetuate. Israel and the U.S. also stand resolute together in charging Iran as the main threat to stability in the region. Iran’s Foreign Minister Mohammad Javad Zarif claims Iranian presence in Syria as legitimate, with an invitation of the Syrian government to fight terrorism, while Iran perceives U.S. presence in Syria as illegitimate. The U.S. is responding to Iranian presence by bolstering its presence and countering Iranian threats. Iran continues to support militia groups in Syria and Yemen; and the points of cause for conflict continue.

Russia maintains a role of providing semblance of stability in the Middle East as it partners with many actors there. Such is the case with Iran and Israel who, despite their hostility towards one another, both have working relations with Russia. Russia has demonstrated the resilience of its relationship with Israel and Russian collaboration with Iran will continue on the ground in Syria as they both seek to support President Bashar Al Assad. The Syrian government has regained control of much of the country due to the support from Russia and Iran. And similar to Iran, Russia seeks to quell the export of terrorism from Syria through strategic partnership with Iran that supports the Syrian government against a rebel and jihadi uprising. Russia would be well poised to work with Iran because it has garnered a reputation for it. The problem? Tight economic sanctions on Iran decreases the competition in the oil market - a good thing for Russia.

Making a Seat at the Negotiating Table

Nonetheless, Russia and China, both with business ties to Iran, are calling on the Islamic Republic not to ramp up uranium enrichment and further violate the nuclear deal. These same powers also place blame for the increase in tensions in the Persian Gulf more so with Washington than Iran. Deputy Russian Foreign Minister Sergei Ryabkov has said the U.S. should abandon its plan to send hundreds more troops to the Middle East as it signals a provocation. Ryabkov said Moscow had warned Washington and its allies repeatedly against what he called an "unthinking and reckless pumping up of tensions in an explosive region." Unilateral behavior by the U.S. toward Iran may not only fail to resolve the problem but could further escalate the crisis in the situation.

Sanctions imposed by the U.S. make sense. Weaken Iran by targeting its strength in the oil market. If the Trump administration is looking to squeeze Iran’s economy in hopes that Iran will respond and succumb to some sort of surrender, even regime change, this has little chance for success. In the case of Venezuela, Trump’s advisors effectively pushed inflammatory policies with the hopes of extreme outcomes in its favor that have not happened. And in Venezuela, the maximum pressure campaign that was successful economically is still unlikely to cause the political change Trump desires.

If multilateral diplomacy does favor success with Iran, with further increased economic sanctions unlikely to produce the outcome the Trump administration intends, an option with high risk would be to draw Iran back to the negotiating table for an enhanced revival of a nuclear deal by easing up on the sanctions. "Once those sanctions are lifted, then ... the door for negotiations is wide open," Iran’s Foreign Minister Zarif has said. "It is the United States that left the bargaining table. And they're always welcome to return."

Iran is frustrated by the lack of economic benefits promised through signing onto the 2015 nuclear deal. They are pushing confrontations to the edge in a call to the international community to encourage the U.S. to change course. A decrease on the hardships imposed by U.S. economic sanctions may be just what it takes to bring Iran back to the negotiating table. The U.S. backing off to the extent that dialogue between the powers is welcome again, and a renewed nuclear agreement brought forth, would produce results that President Trump may not exactly be looking for but would curtail Iran’s incisive actions in the Middle East. Not to mention, if Iran is less inclined to continue its provocations it may just be more inclined to adhere to its limits of uranium enrichment levels, the ultimate cause for concern the U.S. and the international community ought to prioritize.

But just how far should the U.S. ease up on Iran? Backing off is a posture that runs counter to President Trump and would be sure not to suit his base, especially during his run for incumbency in the presidential election of 2020. Easing up on economic sanctions in order to coax Iran back to a place of willingness to negotiate may be the only sure-fire way to productively take the first step towards negotiations for a new nuclear deal and produce results that are in the interest of U.S. national security for the long-run.