Color revolutions and regime change in Georgia and Ukraine

In 2003 and 2004, a series of peaceful street protests broke out in Georgia and Ukraine, leading to new presidential elections in both countries. These movements were defined by Western observers as color revolutions and interpreted as democratic breakthroughs, capable of bringing about a political transformation in post-Soviet countries. This article assesses the motives and results of the Orange and Rose Revolutions. The main objective is to understand whether it is possible to consider these color revolutions as democratic breakthroughs, which produced a genuine regime-change, or if they represent a continuation of previous political structures and practices. 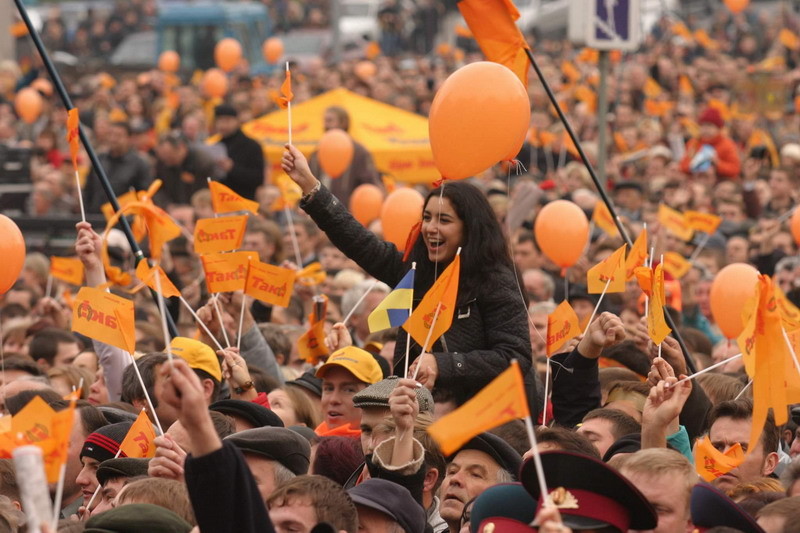 In the case of the Orange Revolution, President Kuchma experienced two developments after his re-election in 1999 that undermined his power: low popularity and a succession struggle. This situation led elites to defect. The most important figure was Viktor Yushchenko, key element of the Kuchma team. Henry Hale, a well-known political scientist specialized in post-Soviet Eurasia, highlights that: «A massive rupture of the networks constituting Kuchma’s single-pyramid system, at a point of anticipated presidential succession under a highly unpopular president, generated a major opening for mass input […]. The result became known as the Orange Revolution».[1]

Indeed, in 2004 Viktor Yushchenko supported protests against the electoral fraud that brought Viktor Yanukovich to power, forcing new elections. As a result, in 2005 the Viktor Yushchenko era started with high hopes from internal and external actors. However, as Hale points out, while Ukraine registered significant democratic improvement during the subsequent five years, outside observers started to consider the Orange Revolution as a failure, an event that left massive corruption and political paralysis in place.

The outcome of the 2005 movements is connected to several factors. First, as Taras Kuzio highlights, Yushchenko did not shift the Ukrainian state from immobile to mobile. This may be linked to the fact that he was misread as a liberal reformer, while actually being conservative. The new President did not bring about the so-called hard transition, that is, a radical break with the former regime. Indeed, Yushchenko did not introduced criminal charges against members of the previous establishment. Consequently, people started to lose faith in the newly established regime and eventually political forces representing the previous elite returned to power: in 2010 Viktor Yanukovich, whose elections in 2004 was annulled over electional fraud, replaced Yuschenko as a President.

Moreover, four major elements supporting corruption and state’s immobility in Ukraine continued to exist after the Orange Revolution, as highlighted by another popular scholar, Taras Kuzio.[2]

The first one is the lack of political culture, which leads to consider corruption as normal and legitimate. Consequently, no prosecutions are carried out, while autocratic tendencies continue to characterize political forces and leaders. The second element is the undeveloped civil society, which enables elites to act above the law.That of weak institutions is another factor supporting Ukraine’s immobility, with the absence of a single centre to combat corruption. The final element is connected to parties and ideology. Indeed, parties are often mere political projects, whose aim is to achieve power, rather than groups of people linked to each other by common values and believes. As far as these elements will continue to exist, Ukraine will not shift from an immobile state towards a mobile one. Actually, in Ukraine oligarchs still seem not to be will to carry out reforms and to accept the rule of law, which consequently cannot spread to the society as a whole.

The Georgian Rose Revolution followed a pattern similar to the Orange Revolution. In late 2003, Mikhail Saakashvili led protests that brought about the resignation of President Eduard Shevardnadze. The lowering popularity of the incumbent president combined with a succession struggle were the main drive of the Revolution. Indeed, these elements led some members of Shevardnadze’s team to start planning to take power. Saakashvili, as Yushchenko, was a key element of the regime but defected after the incumbent President entered a lame-duck syndrome.

As Hale highlights, after the Rose Revolution, another single-pyramid system emerged under Saakashvili.[3] This new single-pyramid system involved great presidential informal power. It is worth mentioning, however, that under Saakashvili there were successful efforts to combat corruption, improve infrastructure and open up the economic environment. However, this process of state-building was not accompanied by a democratic transition. Hale, for instance, explains that the elimination of corruption within the police, became a tool for selective prosecution directed from the top. Additionally, measures to influence the business sector were introduced. Among them, there was the collection of funds from people accused of corruption. These funds were then put in extrabudgetary “law enforcement development fund” until the IMF ordered this to stop in 2005. Consequently, it can be concluded that the anti-corruption and development measures introduced by Saakashvili were effective in showing a positive image to the West, while hiding the intrinsic patronalistic politics still affecting Georgia after the Rose Revolution. It is worth mentioning that in 2010 Saakashvili introduced a reform which established a divided-executive constitution, to be implemented since 2013. This reform weakened the formal powers of the president, establishing that the prime minister would be elected by the parliament. This step may be interpreted as a move that he made to stay in power as a prime minister. However, he failed and by 2012 Saakashvili’s single-pyramid system broke down.

From the Ukrainian and Georgian cases, it turns out to be clear that the West mistakenly defined the “color revolutions” as democratic breakthroughs. Indeed, the Revolutions proved to be a product of what Henry Hale defines as patronal systems. As he explains in his text Patronal Politics, they raised when the incumbent patron began to lose popularity and key supporters from his network started to position themselves as opponents to gain the post of new patron.

What had changed after the Orange Revolution was not the level of patronalism in politics, but the arrangement of patronal networks. Indeed, a new divided-executive constitution was passed, favouring the establishment of several pyramids competing among them. The same statement can be made about Georgia. In this country,Saakashvili has created a false dichotomy between democracy and state building, prioritizing the latter. Initially the government was successful in areas such as fighting corruption and improving infrastructure. However, because issues of democracy were ignored, efforts to strengthen the Georgian state were not as successful as they might have been.

The movements erupted in Georgia and Ukraine in 2003 and 2004 respectively were much a continuity with the previous political system rather than moments of radical change. Not only the “color revolutions” did not lead to democratic transition in other post-Soviet states, but their impact on Georgia and Ukraine was very different from what the initial expectations. The high hopes that followed the Rose and Orange Revolutions finally crashed into big disillusions

MGIMO graduate in Political Science (Master’s program in Politics and Economics in Eurasia).