The year 1971 marked a cornerstone in the relations between India and the Soviet Union. The Soviet Minister of Foreign Affairs, Andrey A. Gromyko, and his Indian counterpart, Sardar Swaran Singh, had just signed the Indo-Soviet Treaty of Peace, Friendship and Cooperation. This treaty reflected the geopolitical landscape of that historical moment. On the one side, the agreement revealed, once again, how deep the rift between the USSR and China was. On the other one, India was looking for a hegemonic ally in the midst of the Bangladesh Liberation War. 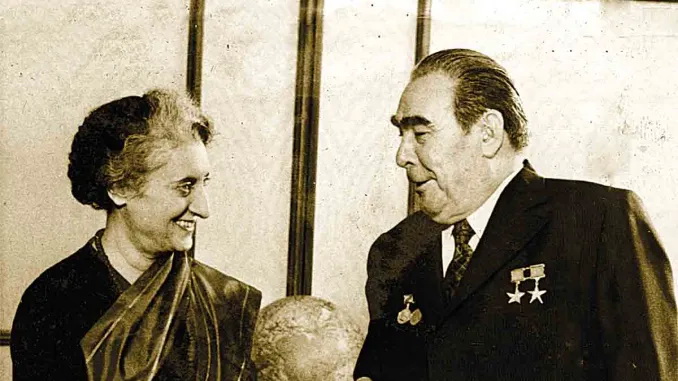 With the collapse of the Soviet Union, it took two years for Boris Yeltsin to make a step forward. Only in 1993 was he able to cement this relationship by visiting India and signing another 20-year bilateral treaty, showing how pragmatic his foreign policy was—a path which has also been pursued by his successor, Vladimir Putin.

More recently, in 2014, the Indian Prime Minister, Narendra Modi, even suggested that Russia represented “India’s closest friend and the preferred strategic partner” during a meeting with President Putin. Throughout the years, this old friendship has produced cooperation in different sectors. The 2019 Eastern Economic Forum held in Vladivostok, for instance, unveiled the joint Chennai-Vladivostok Maritime Corridor. This corridor, coming in response to China’s Maritime Silk Route, has in fact ushered in a new era of bilateral cooperation in the Indo-Pacific.

Cementing a partnership through weapons

Defense represents one of the key sectors of cooperation. On April 6, 2021, Sergey Lavrov, Russia’s Foreign Minister, paid a visit to his Indian counterpart, Subrahmanyam Jaishankar, in order to take the Indo-Russian relationship to a new level. Defense was among the topics discussed.

Cooperation in the field of defense is nothing new for the relations between Russia and India. Already in 1955, before the Sino-Indian border conflict, the Soviet Union transferred two Il-14 aircrafts to India.[1] This kind of understanding was further enriched in 1960s and 1970s. However, following the collapse of the Soviet Union, an impeding financial crisis sparked off in Russia, engulfing its defense industrial complex as well. At the time, Moscow was thus not able to meet the Indian demands, but the beginning of the new millennium marked a shift in this sense.

As of late, the two countries have already been cooperatively producing MiG fighters, Su-30 jets, T-90 tanks and BrahMos cruise missiles. During his latest trip, Lavrov strongly emphasized Russia’s role in providing cutting-edge technology to India and its willingness to establish a new joint production unit. The intended joint production of weapons and military equipment must be perceived within the framework of the “Make in India” project, a major initiative with the aim of boosting innovation, investment and manufacturing within the country.

The 2017 Countering America’s Adversaries Through Sanctions Act (CAATSA) is, in fact, still there, waiting for someone to walk in its trap. In December, Lavrov clearly stated how India was part of a massive and aggressive campaign by the West. New Delhi would not, in fact, prove the first to be sanctioned by the United States because of arms purchases from Russia. Turkey knows this unhappy ending too well.

This renewed commitment by Moscow and New Delhi in the military-technical field comes at a troubled time in the relations between the United States and the Russian Federation. Just a few days ago, Washington imposed new sanctions on the Kremlin and expelled ten Russian diplomats, purportedly because of the SolarWinds cyberattacks.

In February 2021, the visit paid by Harsh Shringla, the Indian Foreign Secretary, to Moscow represented the first trip during the COVID-19 pandemic. This event inevitably underlines the privileged relationship between the two countries. Yet, appearances are deceptive sometimes.

First of all, Lavrov’s trip to New Delhi was combined with that to Islamabad. According to some analysts, this was perceived as a belittling sign from Moscow’s part. This may be the reason why the Indian Prime Minister, Narendra Modi, has decided not to meet Sergey Lavrov during his stay.

India remains extremely doubtful about Russia’s closeness with Pakistan. However, Roman Babushkin, the Deputy Chief of the Russian mission to India, has made it clear that cooperation with Islamabad is much more limited than that with New Delhi and that it is mainly based on the common threat of terrorism. He also expressed Russia’s willingness to stay away from the bilateral issues concerning India and Pakistan.

Second, Russia remains the top arms supplier for India; however, New Delhi has turned an eye to the United States and Israel in the last decade. Recently, India reportedly leased four Heron UAVs from Israel. Moreover, at the end of March, the Indian special forces carried out a military drill together with the U.S. special forces at Bakloh in Himachal Pradesh.

This turn to the United States has been questioned by Russia in different contexts. Moscow does not share the view about New Delhi’s Indo-Pacific strategy. Suffice it to say that India is one of the four partners of the QUAD initiative, also known as the “Eastern NATO”. Jaishankar, however, explained that a kind of “Asian NATO” has never been part of India’s plans. Probably, within QUAD, India is the country least inclined to forging a real military alliance rather conceiving the initiative as part of a diplomatic dialogue.

Russia strictly condemns this informal strategic dialogue, by defining the QUAD format as part of “anti-China games”. The Quadrilateral Security Dialogue is, in fact, seen by the Kremlin as a sort of a revival of the Cold War era thinking.

This idea is strictly linked to the assertiveness of the People’s Republic of China. India has openly declared that the acquisition of S-400 missile systems is mainly linked to the scope of countering the threat from China. This comes at a time in which relations between Russia and China “have reached the best level ever throughout the whole of history”, as Lavrov has stated. However, his words were to reassure his Indian counterpart, by emphasizing that Russia has no intention of entering a military alliance with China.

Last year in June, as tensions mounted at the Sino-Indian border, Russia was able to provide a channel of communication between the two parts. At the time, Moscow was chairing two crucial formats: the Shanghai Cooperation Organization and BRICS. The Kremlin thus launched a trilateral RIC videoconference, bearing in mind the notion that good relations between New Delhi and Beijing are essential to the whole Eurasian stability.

Afghanistan represents another sore spot for both countries. During the press conference that followed the meeting with Jaishankar, Lavrov plainly stated that “all political, ethnic and religious groups in Afghanistan” should necessarily be involved within the Afghan peace process. The Taliban included.

India has lately changed its strategy towards the issue. While in the past, the country firmly opposed any kind of dialogue with the Taliban, recently Jaishankar showed his interest in stepping up the dialogue between the Afghan government and the Taliban. Nikolay Kudashev, the Russian envoy to India, has thus defined New Delhi as “a welcomed partner” within the Afghan peace process.

Despite some frictions, Russia is increasingly interested in the Indian subcontinent and in South-East Asia. This is also emphasized within the 2016 Foreign Policy Concept. For instance, during his trip to India, Lavrov paid particular attention to the events in Myanmar. On the other side, India would like to involve Russia in its Indo-Pacific strategy in order to tear it away from Beijing.

Lavrov’s trip to India not only marked a cornerstone in the defense cooperation between the two countries, but also paved the way for Putin’s expected visit to India in the near future. As Lavrov stated, Russia appreciates both regional and global cooperation with India, starting from the work within the UN, SCO, G20, and BRICS, but also a strong commitment to the ASEAN centrality. The 2021 Indo-Russian Annual Summit could thus be a memorable occasion for cementing this partnership.