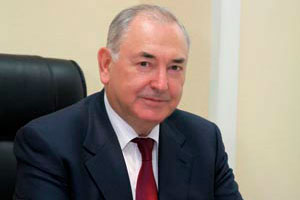 Deputy Chairman, Commission of the Russian Federation (RF) for UNESCO.

Graduated from the North Caucasus Mining and Metallurgy Institute. Holds a Ph.D. degree in History, Doctor of Sciences (Politics). Ambassador Extraordinary and Plenipotentiary of the Russian Federation.

Served as Soviet Ambassador to Syria.

Worked as first secretary of the North Ossetia Regional Communist Committee, then as Chairman of the Committee on International Affairs of the USSR Supreme Soviet. Was elected Secretary of the Central Committee and Member of the Politburo.

In 1989, elected member of the USSR parliament and Deputy Chairman of the USSR Parliamentary Group.

Was a member of the RF State Duma (first and second convocations). Member of the State Duma Committee on international affairs and Co-chairman of the Narodovlastie parliamentary faction.