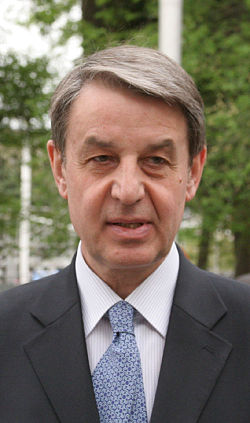 Ambassador Extraordinary and Plenipotentiary of the Russian Federation (RF) to the Holy See and RF Representative to the Sovereign Military Order of Malta.

Graduated from the Moscow State Institute of International Relations (MGIMO) of the USSR Ministry of Foreign Affairs (MFA).

Served at the USSR Ministry of Foreign Affairs, and was posted overseas on various diplomatic missions. From 1998 to 2002, served as First Deputy Minister of Foreign Affairs of the USSR. Participant of various OSCE international fora. Later, was appointed Russian Ambassador to France.

In 2008, was appointed Minister of Culture of the Russian Federation.

In 2012, resumed diplomatic career. In 2013, was appointed Russian Ambassador to the

Vatican and RF Representative to the Sovereign Military Order of Malta by order of the President of the Russian Federation.

Member of the Council on Foreign and Defense Policy and member of the board of trustees of Moscow State Institute of International Relations (MGIMO) of the RF MFA.

Laureate of the “Best Persons of Letters of Russia” award.