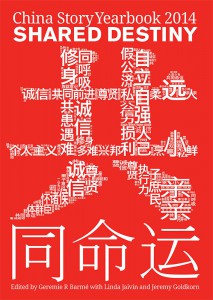 Humanity as never before shares a common destiny, whether it be in terms of the resources of the planet, the global environment, economic integration, or the movement of peoples, ideas, cultures. For better or worse humankind is a Community of Shared Destiny 命运共同体.

The People’s Republic of China under the leadership of the Chinese Communist Party and its ‘Chairman of Everything’, Xi Jinping, has declared that it shares in the destiny of the countries of the Asia and Pacific region, as well as of nations that are part of an intertwined national self-interest. The Party, according to Marxist-Leninist-Maoist theory, is the vanguard of progressive social forces; it cleaves to the concept of shared destiny and its historical role in shaping that destiny. Since its early days nearly a century ago it has emphasised the collective over the inpidual, the end rather than the means. It addresses majority opinion while guiding and moulding the agenda both for today, and for the future.