The U.S. Intensifies its Asia Diplomacy

The U.S. has intensified diplomatic activities in Asia, which is a matter of concern for regional powers. The U.S. is ganging up and making alliances in this region, a direct threat to regional peace and security. To bully China, the Deputy Secretary of State Wendy Sherman traveled to the People’s Republic of China for meetings with State Councilor and Foreign Minister Wang Yi and other senior officials from July 25-26. The meetings were held in the port city of Tian Jin, some 160 km from Beijing, the capital of China. The meetings covered a wide range of issues, including the cases of American and Canadian citizens detained in the PRC or under exit bans. The Deputy Secretary reiterated concerns about China’s cooperation with the World Health Organization and allowing a second-phase investigation into COVID-19’s origins. At the same time, the Deputy Secretary affirmed the importance of collaboration in areas of global interest, such as the climate crisis, counter-narcotics, non-proliferation and regional concerns, including DPRK, Iran, Afghanistan, and Burma. However, the net outcome of the visit was described by China’s Vice Foreign Minister Xie Feng who told the U.S. Deputy Secretary of State Wendy Sherman that the two countries’ relationship “is now in a stalemate and faces serious difficulties.” 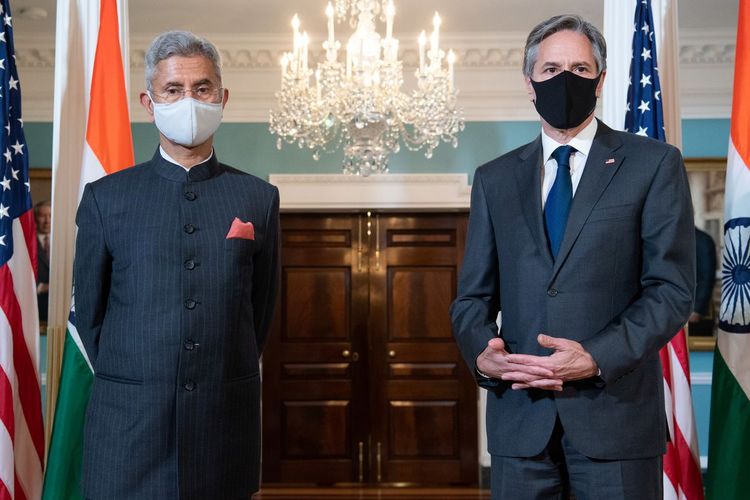 On July 27 and 28, Secretary of State Antony Blinken visited India for the first time since President Biden’s inauguration. Washington Post described the visit, noting that “on July 27, the State Department reaffirmed U.S. support for ‘India’s emergence as a leading global power and vital partner’ in the Indo-Pacific, a geographic label that has taken over U.S. bureaucratic speak to highlight India’s importance in contemporary Asia”.

However, after this visit, India has openly joined the U.S. club and spoiled its relations with all the neighbors: with China the country is in the state of war on LAC, Pakistan is also in the same status on Kashmir LOC, with Bangladesh having severe issues on border disputes and trade disputes. With Nepal, the territorial claims and border disputes have heightened the tensions, with Sri Lanka political and trade differences are still there, political and security issues with the Maldives remain a flashpoint, the border, territorial, and ethnic problems with Myanmar are significant differences.

India is isolated in the region. While India is a close ally with the U.S., it must look after American interests and protect its strategic goals. It is against Russian interests. Naturally, the gap between India and Russia may widen further. It also creates doubts about the Indian presence in the SCO, which China and Russia lead. Maybe, India is sharing the confidential issues discussed in the SCO with the U.S. The whole region needs to re-assess its policy toward India as spying for the U.S. The region is struggling for peace, stability and development, while the U.S. is contrarily spoiling and destabilizing the region.

Lloyd J. Austin, United States Secretary of Defense, visited Singapore on 26-28 July 2021. He met with Minister for Defense Dr. Ng Eng Hen and other senior officials. He also called on Prime Minister Lee Hsien Loong. During the meeting, Dr. Ng and Secretary Austin reaffirmed the excellent and long-standing bilateral defense relations between Singapore and the U.S. Dr. Ng and Secretary Austin exchanged views on geopolitical developments and regional security issues and agreed on the U.S.’ continued engagement in the region. It is worth mentioning that Singapore is situated at a very strategic location—the strait of Malaka—and can block all the trade-ins or out of China. The U.S. visit at a particular time, where the tension between China and the U.S. is heightening up, is meaningful and creates many doubts.

The U.S. vice president, Kamala Harris, will soon visit Vietnam and Singapore. It will be part of America’s anti-China campaign and a matter of grave concern for the regional countries. If something goes wrong between China and the U.S., it will hurt the whole region.

As a matter of fact, after a humiliating defeat in Afghanistan and a severe confrontation with Iran, the U.S. is upset and confused further. The U.S. is losing its grounds in the entire Muslim world, as its aggression of Iraq, Libya, Syria, Afghanistan, and some other Muslim countries has created anti-American sentiments around the globe. The Muslim world sees Russia as a friend and seeking protection and refuge from Russia. It is time for Russia to show solidarity with the Muslim world and rescue the whole region from America’s evil designs.