The Continuing Obsession with Russia

Not since the Cuban missile crisis has there been such an ‘infodemic’ as we are currently witnessing. The media sensationalism about war, and even a nuclear one, is astounding to many calm thinkers. It is fuelled by intemperate and irresponsible statements by various American and European politicians.1 Even government-supported think tanks, such as ELIAMEP in Greece, come out with sensationalist epithets such as ‘A War Waiting to Happen’ and ‘Finger on the Trigger’.2 Let us look behind the hysteria to better grasp what is really happening, by listing some key factors, commenting on them, and concluding. An immediate factor is the Anglo-Saxon wish to maintain and perpetuate NATO; connected to this is America’s apparent desire to try and remain number one; the ‘struggle for mastery in Europe’, not simply from within, but without, with an increasingly unwieldy EU; and an oft ignored factor, namely atavism and human behaviour, both individual and corporate. We shall use history as our template. 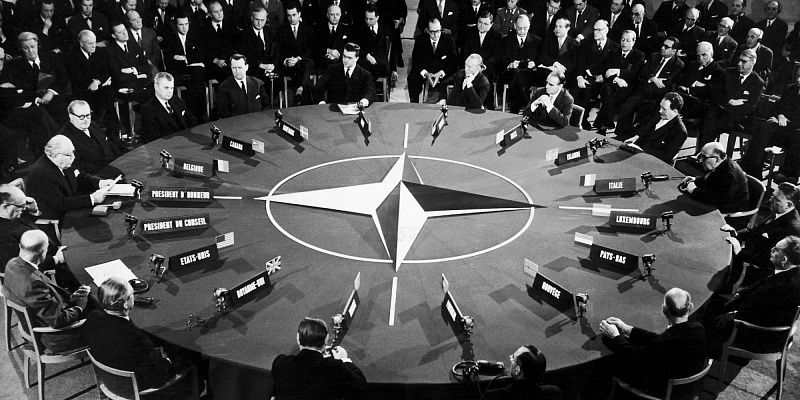 Following West Germany’s entry into NATO in 1955, after France’s rejection of the European Defence Community treaty, and NATO’s refusal to countenance the USSR’s membership, Moscow felt constrained to establish the Warsaw Pact, feeling betrayed by the idea of West German rearmament and the latter’s concomitant connexion to the American military-congressional-industrial complex. Tense years followed, leading up to the Cuban Missile Crisis when, in exchange for withdrawing Soviet missiles from Cuba, America had to withdraw missiles from Turkey. Following the euphoria over the fall of the Berlin Wall, and the alleged heralding of the end of the Cold War, promises were made to Moscow about not expanding eastwards. The German foreign minister, Genscher, for example called on NATO to declare unequivocally that ‘whatever happens in the Warsaw Pact, there will be no expansion of NATO territory eastwards, that is to say, closer to the border of the Soviet Union’.3 Moscow therefore, justifiably, but perhaps slightly optimistically, assumed that NATO would stick to various promises not to extend beyond the River Oder.

The North Atlantic Treaty was in any case due to expire in April 1999. Logical minds thought that since the Warsaw Pact no longer existed, NATO would indeed expire, or at least transmogrify into a cultural organisation. Instead, she expanded eastwards, welcoming Poland, the Czech Republic and Hungary on board, unleashing at the same time an illegal bombing campaign against former Yugoslavia, having clearly decided to bomb, by making unacceptable last-minute demands on Serbian sovereignty,4 just as Vienna had done in 1914. It later emerged that the US had egged Belgrade on in its campaign against the ‘Kosovo Liberation Army’ (KLA), when on 23 February 1998, the US envoy to the Balkans, Robert Gelbard (a career diplomat), described the KLA as ‘without question a terrorist organisation’,5 thus lending moral and political support to Belgrade’s campaign against the KLA terrorists. But he was then posted on, to be replaced by a banker, Richard Holbrooke, who praised the KLA only four months later, even being photographed with a gun-toting terrorist.6 The whole murderous ‘humanitarian’ war was a classic example of image taking precedence over substance.7 The objective was really to keep NATO going, and to show a then dithering Moscow who was boss in the Balkans.

Russia and Russians are a patient people, and following NATO’s bombing campaign, began to get worried about NATO’s intentions, with considerable justification, as the Aghanistan debâcle, the Iraq war (based on a lie), and the destruction of Libya testify. Moscow’s intervention in Syria needs to be seen – and understood - in this context. On top of this, NATO continued to expand after 1999, with the Baltic states, Bulgaria, Romania, Slovakia and Slovenia following in 2004, Albania and Croatia in 2009, Montenegro in 2017 and, for good measure, even North Macedonia in 2020. To rub it in, the US now wishes Georgia and the Ukraine to join. This all connects to US aims. If once upon a time, NATO was designed to to ‘keep the Russians out, the Americans in, and the Germans down’, it now exists to keep the Russians out, the Americans in, and the EU down.

It is hardly surprising that Moscow no longer trusts the US, and suspects it of trying to dominate the world by using NATO as its instrument in becoming a world policeman. Much has been written about the continuing US desire to dominate, despite the fact that the world is already becoming multi-polar. In this connexion, let us quote George Bush Senior in 1992, at the time of the first Gulf War: ‘The world can, therefore, seize this opportunity to fulfil the long-held promise of a new world order […]. Yes, the United States bears a major share of leadership in this effort. Among the nations of the world, only the United States has the moral standing, and the means to back it up […] our cause is just, our cause is moral, our cause is right’[…] May God bless the United States of America.’8

This extreme arrogance sits interestingly with what the British Prime Minister, Harold Wilson, had said seventeen years earlier: ‘There is no future for Europe, or for Britain, if we allow American business and American industry to dominate the strategic growth of our individual countries that they, and not we, are able to determine the pace and direction of Europe’s industrial advance.’9 Twenty eight years before this, as London and Washington were moving into the Cold War, the British embassy in Washington had written: ‘‘The missionary strain in the character of Americans leads many of them to feel that they have now received a call to extend to other countries the blessings with which the Almighty has endowed their own.’10 This missionary strain has recently led to America withdrawing unilaterally from the anti-ballistic missile (ABM) treaty, the Open Skies treaty, and the intermediate-range nuclear forces (INF) treaty, claiming without evidence that Russia was violating them. Exceptional – a euphemism for illegal – behaviour, owever, can hardly be an excuse for breaking the law, whether it involves ignoring the United Nations, or withdrawing from treaties. The continuing American wish to lead the world depends to a considerable extent on keeping Europe on a tight leash. The manufactured Ukraine crisis also provides the US with an opportunity to distract attention from its domestic problems.

Ever since at least Mackinder’s geopolitical obsession with preventing an alliance between Germany and Russia, the US and UK have striven to frustrate both European unity and an independent European approach towards Moscow. A contemporary example of this obsession comes from the British Defence Secretary, Hoon, in 2002: ‘NATO is and will be the only organisation for collective defence in Europe.’11

The weaker European cohesion, the better for NATO, which explains why the UK and US heavily supported EU enlargement, in the expectation that the more unwieldy the European Union, the more likely it would be that Brussels would follow NATO/US policy towards Russia, particularly with the support of Poland and the Baltic states. In this connexion, one of the first things that Poland did on membership of the EU was to order 3.5 billion dollars’ worth of Lockheed F-16s, rejecting French and Swedish offers. The US continues to sell its arms under the NATO rubric. Similarly, its opposition to the Nordstream gas pipeline, with the help of its Polish and Baltic cheerleaders and internal German disagreement, means that the US can sell more of its expensive LNG to Europe. Thus it becomes clear that a war will help the US economy. The Ukraine is the focal point. Let us now get down to the human basics.

Atavism and the Human Factor

We are currently witnessing the continuation of the anti-Russian obsession, albeit in new colours, and with new names. It goes back at least to in 1791, when William Pitt the Younger denounced Russia for its supposed ambitions to dismember Turkey.12 By the time of Napoleon’s defeat, Britain was focusing on Russia as the main hindrance to its wish to control the Eastern Mediterranean. It is no exaggeration to say that throughout the whole of the nineteenth century, one of the British Empire’s main preoccupations was with Russia, owing to the latter’s usually hostile attitude towards the Ottoman Empire. This anti-Russian attitude was later taken over by America, with British support. It continues now. To this corporate atavism, we need to add the characteristics of the politicians who have brought matters to such a confusing impasse, since group and corporate behaviour are surely based on the individual. State interests are unable on their own to predict actions which are driven by human behaviour.

Twenty years ago, nobody could have predicted the current situation. The extreme behaviour of irresponsible individuals has had a big influence on the present. Obvious examples are Victoria Nuland’s saying to the US ambassador to the Ukraine ‘F**k’ the Europeans’ (not to elaborate on her rôle in getting rid of the legitimate Ukrainian president); Boris Johnson’s calls in October 2016 for a demonstration at the Russian Embassy in London over the (legitimate) Russian intervention in Syria (hardly befitting for a British Foreign Secretary); and British Defence Secretary Gavin Williamson’s telling the public in March 2018 that ‘Russia should go away and should shut up.’

It appears that the US is using NATO as its instrument to egg on Russia to invade the Ukraine, for internal political reasons; to prevent the EU from ever having its own voice in security matters, and negotiate with Moscow; and indeed to control Europe, as peace would kill or at least weaken NATO. Protestations that NATO is a defensive organisation wear very thin when one considers its illegal attacks on non-members who have not threatened NATO members. Here the 78-day bombing of Belgrade comes to mind.

The Ukraine continues to refuse to negotiate directly with the leaders of Lugansk and Donetsk, in violation of the Minsk Agreements, yet rather than criticise Kiev, the US and British reaction has been to send more troops and military aid to Poland, the Baltic statelets and the Ukraine, and to whip up anti-Russian sentiment with immoderate and undiplomatic ranting. The US, UK, Poland and the Baltic statelets, in particular, are itching for a Russian invasion, so that heavy sanctions can be imposed on Russia, enabling the US to make billions by selling its LNG and arms, and to cock an atavistic snook at Russia.

If the Ukrainian army goes on the offensive and starts killing Russians (whether Russian passport-holders or ethnic Russians), Moscow may well have to react militarily, in a humanitarian war, just as NATO claimed to have done over Kosovo. This could open a dangerous Pandora’s Box, including nuclear options. On the other hand, with skillful Lavrovian diplomacy, it could lead to more balanced multi-polar world, with a more independent EU. In the meantime, it is worth remembering that lilies that fester smell worse than weeds, and that NATO was beyond its shelf-life in 1999.

[1] For example, in October 2021, the German Defence Minister, Ms. Kramp-Karrenbauer, told radio station Deutschlandfunk that nuclear weapons could be deployed over the Baltic nations that border Russia. According to her, 'we must make it very clear to Russia that we are ready to use such measures as well, so that it would have an early deterrent effect.' '

[6] This method of egging on, and then performing an about-turn, was also used to encourage the first Gulf War, when the US ambassador to Iraq, April Glaspie, assured Saddam Hussein that the USA had no interest in Iraq’s dispute with Kuwait, thus providing Iraq with an excuse to invade. See Parenti, Michael, Inventing Reality, St. Martin’s Press, New York, 1993, p. 164, in Mallinson, William, Cyprus: A Modern History, I.B. Tauris/Bloomsbury, London and New York, 2005, 2008, 2012, pp. 97-98.

[10] Telegram from the British Embassy in Washington, commenting on the Truman Doctrine, 14 March 1947, printed in Documents on British Policy Overseas, Series 1, Volume XI, No. 62.