The Time to Hesitate is Through 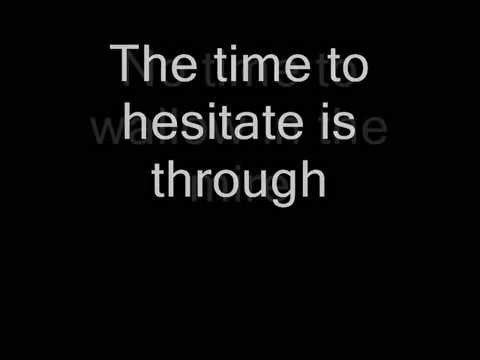 When Turkey shot down that Russian bomber, what exactly was in the message and from whom, more importantly, was it coming from? Who was it that was really saying, “Come on baby light my fire. Try to set the night on fire?”

The fact that the Turkish plane, which shot down the Russian bomber, was an American made machine – armed with American air-to-air missiles also raises questions of what possible role the US might have played in this incident. The plane, which shot down the SU-24 Russian bomber, was, after all an American F-16 fighter jet – armed with American-manufactured air-to-air missiles.

From my stand point – having looked at the video, several times now; to me it clearly looks as if the Russian bomber plane was, indeed, struck from behind by the missile: fired from the Turkish F-16 fighter jet.

Although, I am, however, far from an expert in this department…the trajectory of the falling plane and the fact that it appears to be flaming from the rear (the front of the plane, seems clearly intact in the video clip) seems indicative of the fact that that plane was, indeed, struck from behind. Clearly the plane had not exploded into millions fragments, while still in the air.

Moreover, it seems wholly unrealistic that such a high-ranking (Turkish) ministerial decision could have been made, to fire upon and shoot down out of the sky a very fast-travelling jet plane, and its occupants, within the space of a mere seventeen seconds, without any afore thought whatsoever. Someone knew exactly what they were doing and, moreover, why.

I find it incredulous that a high-ranking governmental minister could have been contacted – either from the air and/or ground control and then being in the position, to have made an “informed” decision in such a short space of time. Even Superman would have been very hard-pressed to have achieved that, which is nothing short of a miracle.

Unless, of course it had all been pre-planned? Should that be the case? Then, with (if anyone) whom and for what purpose? Surely these are important questions which need good answers? Although, I fear we shall never really get to the bottom of this outrage. I.e. Finding out the exact truth.

Was this a Washington-initiated trap?

Was it set as a trap – to entice Russia into reacting, by attacking Turkey, which is a NATO member, thus enabling Turkey to invoke Article 5, which would have committed NATO into defending Turkey and, thus, stoking a dangerous and possible WW111 scenario?

The civil war in Syria – against Isis, is a complicated affair, of literally of biblical proportions: with many interested countries and tribal clans in the region: all, of whom, are vying for some sort of regional control and, ultimately, the control of the many oilfields. So, what is Turkey’s interest here?

According to author, Mike Whitney, who has contributed this opinion piece to www.counterpunch.org he suggests that, “The Russian-led coalition is closing in on the Syria-Turkish border which will put an end to Erdogan’s dream of toppling Assad or continuing to fuel the war with terrorists that are provided a safe haven on Syrian soil.

This is why the Su-24 fighter was shot down on Tuesday. It is a desperate attempt to salvage the failed strategy of toppling a secular government and replacing it with friendly Islamic extremists who hew to Erdogan’s twisted worldview.”

Moreover, according to an article, recently published by Sputnik International, independent researcher and writer Timothy Alexander Guzman underscores that Turkey's provocation against Russia "is not surprising at all," claiming that Washington's fingerprints are all over Ankara's recent provocation.

The Turkish-created buffer zone, inside Syria

He goes on to state that, “It’s the Turk’s” who are controlling the situation in Syria under Washington’s direction in an attempt to remove Assad.  Now Turkey shot down a Russian SU-24 fighter jet because it claims that it violated its airspace. One important fact to consider is that Turkey created a “buffer zone” five miles inside Syria since 2012, a McClatchydc.com report said.

Mr. Guzman further states that Turkey has maintained a buffer zone five miles inside Syria since June 2012, when a Syrian air defence missile shot down a Turkish fighter plane that had strayed into Syrian airspace. Under revised rules of engagement put in effect then, the Turkish air force would evaluate any target coming within five miles of the Turkish border as an enemy and act accordingly.”

Mr. Guzmen then goes onto to say that, “Creating a buffer zone five miles inside Syria will of course will lead to confrontations between Russian and Turkish fighter jets along the border. Ankara can know claim its airspace (five miles from the actual Turkish border) has been violated.  An article entitled ‘Russia “Violated” Turkish Airspace Because Turkey “Moved” Its Border’ details Turkey’s border policies produced by the Free Syrian Press and published by Global Research.”

Turkey is a past-master at land-grabbing

Turkey, however, is a past-master at modern-day land-grabbing, the author reminds us. Guzmen then goes onto state that: “Under the Ottoman Empire the ‘Armenian genocide of 1915’ took place killing more than 1.5 million Armenians and other minority groups including Assyrians and the Ottoman-Greeks and that there have been more than two centuries of conflict between the various Kurdish clans and Turkey, with the Kurds calling for an independent Kurdistan or an autonomous state within Turkey that will allow political and civil rights for the Kurdish people.

One of the main groups is the Kurdistan Workers’ Party known as the PKK has been at odds with Turkey due to cultural discrimination and large scale massacres since the establishment of Turkey in 1923.”

And, all of this is without the more recent Turkish invasion of Cyprus, in 1974, led by the US-backed Greek Junta and the Cypriot National Guard that resulted in acquiring 40% of the land and expelled more than 180,000 Greek Cypriots, despite objections from the UN security council, which is rather toothless, to say the least.

Turkey is a perpetual invader of Greek airspace

When it comes to blatantly violating other county’s airspace – Turkey, once again, is a past master at that too. Ask the Greeks…they know all about that. Turkey has entered Greek airspace more than 8,693 times since 2008 although Turkey is a member state of NATO. In response to the downing of the Russian SU-24 jet bomber, by the Turkish air force’s American made F-16’s – an unusual, and not too diplomatic spat, on Twitter, erupted between the Greek and Turkish Prime Ministers. 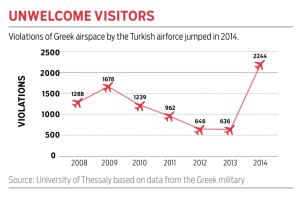 Mr. Tsipras, the Greek Prime Minister has even (recently) taken to Twitter to complain about the incursions, by Turkey of its airspace saying, “To Prime Minister Davutoglu: Fortunately, our pilots are not mercurial as yours against the Russians #EuTurkey”

“What is happening in the Aegean is outrageous and unbelievable #EUTurkey” Tsipras continued. “We’re spending billions on weapons. You–to violate our airspace, we–to intercept you #EUTurkey” Tsipras said in a third tweet. Even Israel said it’s easy to pick up the phone, prior to shooting down an aircraft and establish the facts first.

The current Turkish government is being totally selfish in all respects

As a result of Russia’s being “stabbed in the back,” as Mr. Putin has correctly said, upon receiving the news that one of his county’s war jets had been shot down, by the Turkish air force, within the space of a mere seventeen seconds, of the Russian aircraft (alleges Turkey) entering Turkish airspace…the Russian government, quite rightly, imposed economic and visa sanctions against Turkey and its citizens.

And, here we have it. Fast forward a few days later and Turkey is now saying, that it is ready to talk about the sanctions. Mr Davutoglu has since decried the sanctions, urging Moscow to "reconsider these measures in both our interests," while reiterating once again Ankara's willingness to talk.

One has to wonder what planet these people live on? Turkey is not willing to apologise and yet it is now pining away, like a big, totally selfish baby, who has had its candy taken away by an angry parent, for its bad behaviour.

What gets me is, about Mr Davutoglu’s wailing, in protest against the sanctions, is the "reconsider these measures in both our interests," bit…err…"in both out interests?” Therefore, suggesting that, like any spoilt baby…Turkey wants its cake and eat it.

Well, it can kiss goodbye to all of that past goodwill, which had been built up over the last twenty-odd years, and quite rightly so.

I have no doubt that this crass behaviour, by in incumbent Turkish government, will really piss off many Turkish businessmen, who have both invested in and have built up substantial trade links with their partners the Russian Federation – from tourism, to construction and the food export businesses – not to mention the many Turkish restaurants dotted around Russia’s larger cities, which will surely suffer a huge loss of diners. As they say in America…"Bye, bye, pork pie."

For Russia, the time to hesitate is now through

Mr. Putin and his cabinet have now, as a result of this clearly needless and wholly avoidable tragedy – culminating in the loss of not only a very expensive jet fighter, but, more importantly, the loss of two lives…that of the captain of the downed jet (who was shot to death, while parachuting down, out of the stricken plane - itself a war crime) and a serviceman, involved in the rescues mission to retrieve the living, captured pilot by err... so-called “moderate rebels;” has now indicated that the time for any hesitation and niceties is through.

The silence, by the way, emanating from NATO countries (in expresssing their condolences for the loss of two Russian servicemens lives - quite needlessly at that), is also resoundly loud. These men also has families.

Russia has now deployed some serious anti-attack, protection kit, and personnel; to supplement its mission in Syria – protecting its forces there. Its bombers will now be shadowed and escorted by combat-ready fighter jets and all of its jets are now being fitted out with air-to-air missiles – prior to take off. Also, the battleship Moskva is now patrolling the region, with orders to shoot down any Turkish/NATO aircraft, crossing into the battle zone, where Russia is operating.

This then, is sending a very clear signal: in the light of Turkey’s wholly unacceptable behaviour in the shooting down a Russian military aircraft, which posed absolutely no threat to Turkey and, moreover, which was over Syrian airspace in any case: that the time for any hesitation, for Russia, in the taking of decisive actions, is now through. In other words, “No more Mr. Nice Guy.”

Mr. Putin is quite right not to accept the calls of Erdogan, which is rather akin to closing the stable doors after the horses have bolted, in any case. Especially with no formal apology, from Turkey forthcoming.

For what on earth is there now to talk about? Perhaps Erdogan would like to talk about the weather and the price of potatoes?!