In The Aftermath Of Taliban 2.0, Big-Power Race Hit Kazakhstan?

Conventional security narrative in Central Asia has been that Islamist militancy impacts “from Ferghana Valley to South Waziristan”. However, with the Taliban’s return to power in Afghanistan, the ambit might have expanded, engulfing the whole of Eurasia, as the ongoing developments in Kazakhstan are there to show. 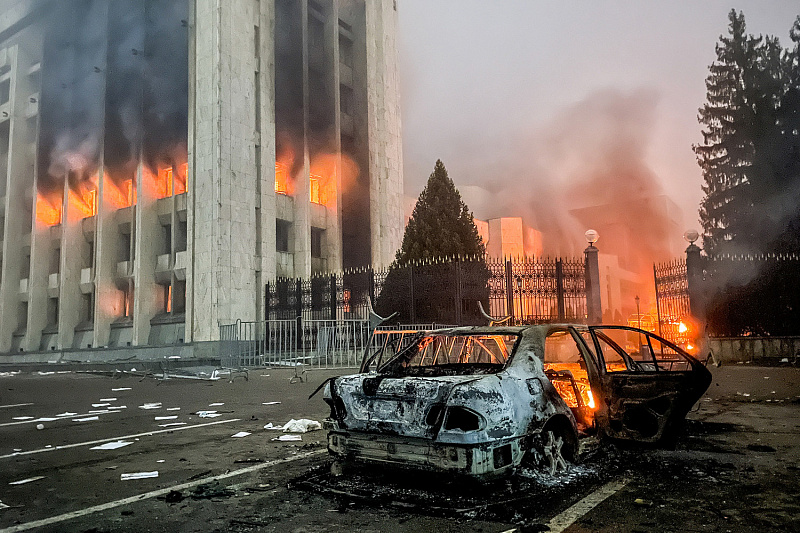 A country the size of Western Europe, whatever the internal dynamics of discontent, inflation and corruption might be, has been in a tailspin with unprecedented violence that threatens the regional stability also because of conflicting big-power interests. Indeed, much of Central Asia, especially Kazakhstan and Uzbekistan that have prospered thanks to huge Western investments in the energy sector since the breakup of the Soviet Union, find themselves buffeted by a race for their mineral wealth. Their struggle to keep a balance between the relatively distant Western investors and the two big brothers next door, China and Russia, has become more complex.

While the Russian President, Vladimir Putin, rushed the Russian-led military force under the Collective Security Treaty Organization (CSTO) to enter Kazakhstan in order to restore order, the U.S.-led Western world inevitably sees this move as a Russian ‘invasion’ meant to “subvert the democratic order” in Central Asia.

However, this narrative largely underestimates the other players involved. Some accounts have it that the protests turned violent with at least some help of militant Islamist groups, either operating from Turkey or cushioned by groups from the Afghanistan-Pakistan region.

Significantly, sharing a long common border with Kazakhstan, China is closely watching the situation. The Shanghai Cooperation Council (SCO), an intergovernmental organization that promotes cooperation and coordination against terrorism and other external threats, has also been silent. Turkey, keen to retain its cultural ties and economic influence in the largely Turkic Central Asia, has become the third player in what Ankara considers its backyard. Some observers claim that the Turkish President, Recep Erdogan, appears to be tacitly promoting militant groups, thus boosting the role of Sunni extremists together with the contribution of Pakistan’s Prime Minister, Imran Khan. The two leaders see themselves playing a key role in the Organization of Islamic Countries (OIC), and their combined interest is to move the OIC away from the domination of Saudi Arabia and other Gulf nations.

This intra-Islam power politics might have been a relevant factor in the violent events of Kazakhstan, and the recent and rapid Taliban victory in Afghanistan that caught the entire region by surprise should not be forgotten in the overall picture. The Central Asian Republics (CARs) did not recognize the first Taliban government (1996-2001) and eventually supported the U.S.-led assault on Afghanistan, an operation in which the Northern Alliance, composed mainly of ethnic migrants from Central Asia, played a key role. This time, with Taliban 2.0 in power, the Central Asian countries are not supporting any force hostile to the Taliban, like Ahmed Masoud of the Afghan Resistance.

Instead, they have adopted a wait-and-watch policy to see if the Taliban will keep their promise of not nurturing and exporting terrorist groups to Central Asia. The Kazakhstan developments appear to belie these hopes and may have forced the largest CAR to secure help from Moscow.

Kazakhstan has been less vulnerable to Afghan-related terrorism due to its substantial economic and security resources as well as its physical distance from Afghanistan. However, it was also the region where Turkey-fueled Islamism was injected in a big way. In the wake of the latest round of developments, Dr Abbas Djuma and Vladimir Avatkon, both renowned Turkologists, have emphasized the role of Turkey, both past and present: “Turkey has been in Kazakhstan for a long time and tightly,” they have told many media outlets. The duo recalled that in many ways the Turkish influence, especially economic, spread during the thirty-year, post-Soviet rule of President Nursultan Nazarbayev, who not only never made a secret that Ataturk was a role model, but he was also keen to replace Russian presence by an increasing Turkish role.

A side effect of this multi-vectorial foreign policy is that it also enhanced the role of Islam among the hitherto secular Kazakhs and the resultant Islamist radicalism in the society, with many groups trained in Afghanistan-Pakistan through the 1980s. These groups used the Turkish umbrella for spreading radicalism, while Turkey focused on the construction of mosques, various political, educational institutions in Kazakhstan.

The past role of Islamist militant groups, based in Turkey and Afghanistan-Pakistan region, that bears deep relevance to the current situation in fomenting trouble in Central Asia is best summed up by Richard Weitz, Senior Fellow and Director of the Center for Political-Military Analysis at the Washington-based Hudson Institute. Commenting on the Central Asia’s Taliban surprise back in September, Dr. Weitz noted that “during the previous Taliban-ruled government in Afghanistan, the Islamic Movement of Uzbekistan (IMU) used Afghan territory for training and transnational terrorist operations. Over time IMU militants aligned, and often merged, with al-Qaeda and ISIS’s local affiliate, Islamic State-Khorasan Province (ISKP). Unlike the original IMU, which focused on regime change in Uzbekistan, al-Qaeda and ISKP have a pan-Islamist Salafist ideology that aims to replace all Central Asia’s secular regimes with an Islamic caliphate that would encompass Central Asia, Afghanistan, and parts of Pakistan and China.” Notwithstanding Taliban 2.0 promise of not allowing the Afghan territory to be used to export terrorism, there is no indication so far that any of these fighters have been evicted or have quit Afghanistan.

Past records show that these groups have the tendency to merge with the local populace and remain entrenched. And having done that, they exercise influence, even control of the ground reality in the region. With the exit of the US-led forces in August 2021, the past seems to be repeating itself. As for Central Asia, we might see more Kazakhstan-like situations in the near future.