There goes a saying: A chain is as strong as its weakest link. This may very well be the case with the EU vis-à-vis its member state dependency on Russian natural gas. While analyzing the European gas market, too much attention has been focused on the EU-28 average gas consumption index and very little scrutiny was given to individual member states. Analysts were fixated with the EU Commission official stance on the matter and respective implementation of its normative agenda aimed at diversifying energy supplies and liberalizing the market. Coupled with the increased LNG imports from Qatar, prospective Trans-Caspian pipelines and renewable energy initiatives, many experts and policy makers were declaring the success of the diversification efforts. Europe seemed to be on the right track towards energy independence from Russia. However, there was a growing misalignment between intentions and reality as the asymmetry in vulnerabilities was not only persisting, but deepening where “it hurts most” – Post-Socialist states and…Germany.

Between 2003 and 2010 the share of Russian natural gas imports in the EU fell from 44.1% to 29.5%, but it eventually increased to 39% in 2013. Countries such as the Baltics (Latvia, Lithuania and Estonia) and Finland import all their natural gas from Russia. This makes them highly exposed to potential disruptions of natural gas deliveries. However, they are not vulnerable to Ukrainian transit risks, since their supplies do not rely on Ukrainian transit pipeline infrastructure. Other countries such as Slovakia, the Czech Republic and Bulgaria are nearly 100% dependent on Russian supplies and fully rely on uninterrupted transit through the territory of Ukraine. Central European Countries also face very high levels of vulnerabilities: Poland 53% and Hungary 89%. However, the risk is mitigated as a result of available interconnectors, which in the case of gas disruptions can supply the exposed countries with gas from underground storage facilities in Germany. Other countries such as Romania are self-sufficient, since they import only around 10% of their gas consumption from Russia, but rely on continuous Russian gas supply for functionality of its pipeline system. 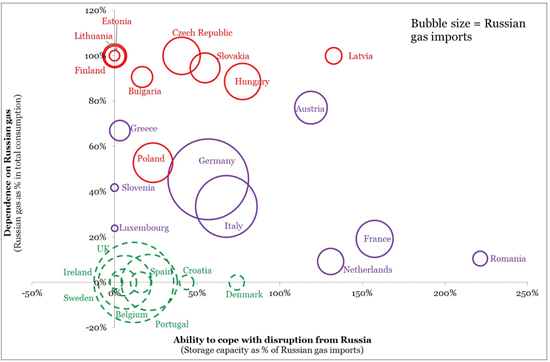 When one observes the cacophony of levels of energy security in Europe it is very hard to imagine a coherent and realistic solution to the situation. Fast-forward one year we see a slightly different picture. The next table reflects the levels of imports, overall consumption and respective numbers of Russian gas imports as a percentage of country-specific consumption for the year of 2015. I've personally developed the following table in order to reflect the most up-to-date state of gas imports in the EU. The uniqueness of the data is a result of combining Gazprom export statistics with Eurogas consumption data, both of which should reflect the most accurate data in terms of exports/consumption. 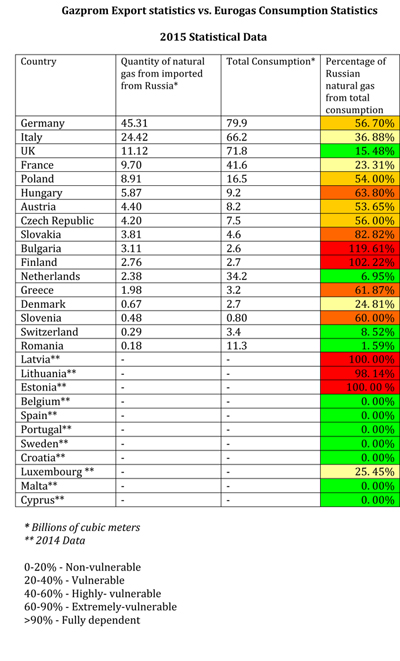 Data from 2015 clearly indicates that the Baltic countries, Bulgaria and Finland remain fully dependent on Russian gas deliveries. Other countries such as Hungary, Slovakia, Greece and Slovenia have an extremely high level of dependence. Next on the list come Germany, Poland, Austria and the Czech Republic, which have above 50% level of dependency. This puts them in the high-dependence list. Italy, France and Denmark do have a high level of gas (above 20%) coming from Russia, but they are not that vulnerable, since they also have large LNG storage capacities. All other EU countries have very low levels of Russian gas import, which puts them in the “safe zone”. It is interesting to note that the UK has substantially increased its natural gas imports from Russia after UK based company Centrica and Gazprom sealed a deal for increase in gas imports. While the right column gives a pretty clear picture of how dependent are individual member states on Russian gas supplies, there are other numbers that are equally important. The total quantity of imported natural gas is another critical indicator of vulnerability, regardless of what part of the overall consumption of the country it represents. As in the case of Germany, the 45.31 billion cubic meters of gas imports from Russia is a number too big to be ignored. What’s more important is that the sheer magnitude of the quantity makes it very hard to substitute in case of deliveries interruption. When we take into consideration that Germany is importing such a huge amount of gas from a single source, which at the same time represents over 50% of its total gas consumption, then the perceived vulnerability of a potential disruption of gas supplies seems to be very stark. Germany’s gas storage capabilities may offset a potential crisis situation, but nevertheless may only ease the situation for a limited period of time (Ironically, Europe's largest gas storage facility in Rehden, Germany is owned by Gazprom). While a possible disruption in small and highly vulnerable consumers such Slovakia may be relieved by reverse supplies through interconnectors, who is capable of directing supplies to Germany (which consumes 15 times more gas) in a case of a crisis? Nobody. That’s a real vulnerability and that’s what most analysts fail to portray. In reality, Russia and Germany are locked in a strong interdependence, which makes it very unlikely that either of the two will do anything to disrupt the existing model as long as it is mutually beneficial. What's more, they will do whatever it takes to preserve the existing interdependence, despite the persisting efforts of Brussels to sabotage Russia’s influence on individual EU member states. Russia is likely to intensify its efforts to maintain domination on the European energy market through close cooperation with individual member states, but at the same time will try to adapt to the legislative constrains imposed by Brussels. The questions that bothers me is how far are Poland, Sweden, the Baltic states and Ukraine willing to go in their attempts to install Anti-Russian sentiments as an inherent component of the EU's decision making process? Are energy security concerns legitimate or are they just a pretext for a far more subtle agenda? References BP Statistical Review of World Energy. 64th edition. British Petroleum, June 2015. Europe's vulnerability on Russian gas. European Council on Foreign Relations. 17th March 2015. Gas Supplies to Europe 2015, Delivery statistics. Gazprom Export, 2016. IEA 2014 Natural Gas Information (Figure 1, Energy Cacaphony in Europe) Preliminary natural gas consumption in 2015, Press Release. Eurogas, 2016.