India entered the 21st century as a challenger for the role of a global center of influence, alongside the United States and China. Strategic partnership between Russia and India is a natural phenomenon and objective reality. The two countries’ national interests overlap in many areas. We discussed the current state of affairs and the prospects for the development of Indian-Russian relations with General of the Army, Ambassador Extraordinary and Plenipotentiary of Russia, IMEMO Board of Directors member, RIAC member Vyacheslav Trubnikov.

– India is one of the most dynamically developing countries in the world. What is the secret of its success?

– Above all, the secret of its success is the country’s vast economic potential. Chiefly this means the human element, or in other words, the human potential that India has in abundance. It is this national capital that lends an impetus to the development of India’s modern technologies, facilitates national progress and ensures GDP growth at sufficiently high levels.

– What are the main challenges the country currently faces?

– Unquestionably, today’s major challenge is population growth within a limited territory. This is not, today, the most productive trend in the Indian economy, but if this growth is accompanied by a rise in educational and cultural standards, it may yet turn into an advantage.

– It is imperative that two countries’ economic potential, built on their trade relations, rises to a higher level than that of today. However, I believe that the gross figures for trade (currently standing at about 11 billion USD) alone are not the end of the story. Interaction quality, which chiefly depends on the level of trade and economic relations between the two sides (including mutual investments) is the essential factor. This means Russian investment in India and Indian money invested into the Russian economy. This is the key track for the further development of our economic cooperation. However, the bare figures for trade turnover, I repeat, do not give us a complete picture of what the strategic partners should be striving to achieve in their relations.

– Certain Indian experts regard Russia as a useful partner for their country,  chiefly in the energy sector. India is seeking to ensure its energy security and, in particular, is hoping to develop cooperation with Russia in Central Asia, keeping in mind the construction of major oil and gas pipelines in the region as supply routes. Do you share this viewpoint, Vyacheslav Ivanovich? How would you assess bilateral cooperation in the energy sector?

– Both countries’ commitment to further developing cooperation on energy supply is only natural, as Russia supplies energy resources and India is a long-term consumer of these resources. At present, about 70 percent of India’s energy needs are met through imports, which makes it highly vulnerable from an energy security perspective. At the same time, cooperation with a partner such as Russia guarantees India uninterrupted energy sector growth. Above all, we view the development of cooperation in the nuclear energy sector as another opportunity. Russia is the largest and, probably, the only supplier of nuclear power technologies to India. Take the Kudankulam Nuclear Power Plant: unit one is due to be commissioned soon. The third and fourth stages of construction are to be launched soon. I can envisage our relations developing in the nuclear power sector and our two countries achieving stable cooperation in this sphere, rather than supplies of oil or even liquefied gas. 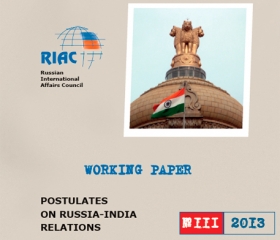