Arctic Shipping: Creating Good Governance Based on Facts, not Myth

Vladimir Mednikov is adviser to the director general of Sovcomflot and serves as president of the Russian International Maritime Law Association. Henry P. Huntington is a senior officer and science director for Arctic Ocean projects at The Pew Charitable Trusts.

The retreat of sea ice each Arctic summer gets more and more attention every year. Many stories in industry publications, scientific journals, and the popular press are not just about the ice but also about what the loss of ice means. For example, the potential for new shipping routes connecting the Atlantic and the Pacific is regularly in the headlines, with much of this coverage combining news of retreating ice and international trade to produce breathless projections of an Arctic full of ships or an Arctic in great peril. These stories often claim, or at least imply, that Arctic shipping will inevitably lead to conflict over the environment, over sovereignty, over commerce, and more.

We beg to differ. There is the potential, as in any human endeavor, for things to go wrong in Arctic shipping. But there also is a great deal of incentive for things to go right. Good governance can reduce risks and create opportunities. If Arctic shipping expands with little oversight or coordination, business, environment, and local communities are all likely to suffer. With sound planning, effective rules, and frequent communication among all involved parties, Arctic shipping can lead to more economic opportunity, better international cooperation, and sustainable environmental protection throughout the region.

In our view, good governance must be based on an accurate understanding of the Arctic region and shipping operations there. While problems create drama and interest, smooth operations are not dramatic and receive far less attention. This has resulted in a distorted picture of what is going on now and what is likely to happen next. Following are some prevalent myths about the Arctic and its shipping—and what we see as the reality. 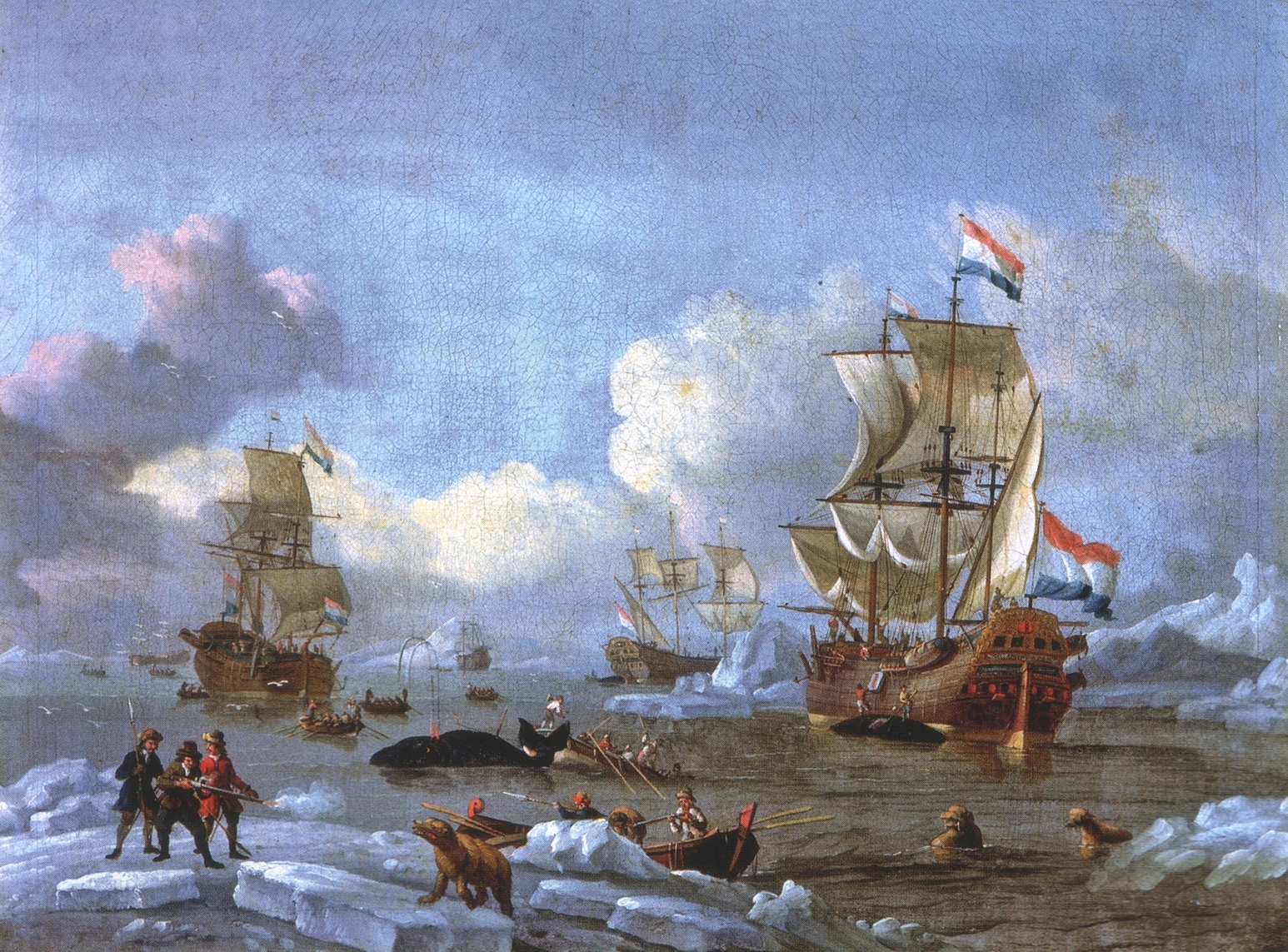 In fact, the number of vessels and the amount of cargo being shipped still have not recovered to the levels seen in the 1980s, during the Soviet era, when the Northern Sea Route in Russia saw extensive domestic traffic. Explorers have traveled Arctic waters for centuries, seeking the Northwest or Northeast Passage or trying to reach the North Pole. Whalers sailed north in the 1600s. Ship access to Arctic communities has been routine for over a century and has expanded to mines and oil fields as they are developed. In short, there is considerable experience with Arctic shipping—with and without icebreakers. 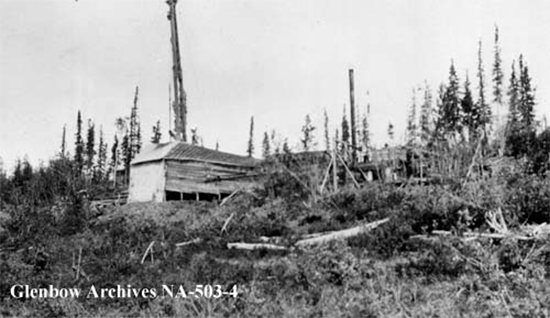 The Arctic has been home to indigenous peoples for tens of thousands of years. They have used, and continue to use, the plants, animals, and minerals of their homelands. Commercial use of Arctic resources—including fur, whale oil, ivory, and fish—has been going on for centuries. Mineral deposits have been sought and used for nearly as long. Arctic petroleum development began in Canada in the 1920s. Reduced summer sea ice may improve access, but it is not the main factor driving Arctic resource use. 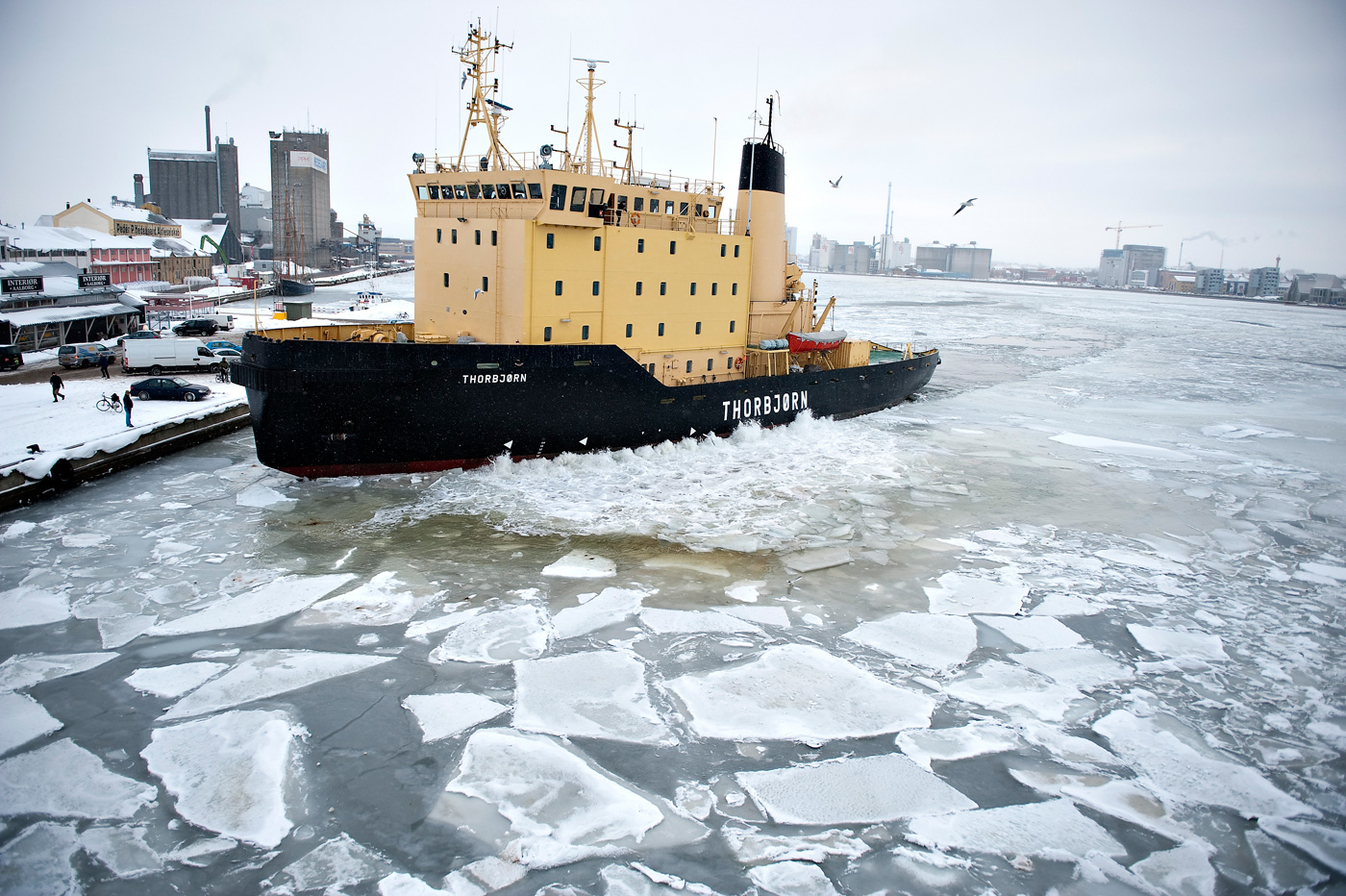 Sea ice is not the only factor in Arctic shipping. Decisions will also be driven by economics, insurance, safety and other considerations. While today’s sea ice loss is greater than any that has been observed to date, the Arctic experiences a continually changing climate. Sea ice has been a permanent feature of the Arctic Basin for millennia, but it changes from year to year, decade to decade. In the 1920s, for example, warmer air and water in the European Arctic led to the loss of sea ice from most of the Barents and Kara seas. Sea ice conditions will continue to vary for the foreseeable future thus requiring special care and attention for Arctic shipping. 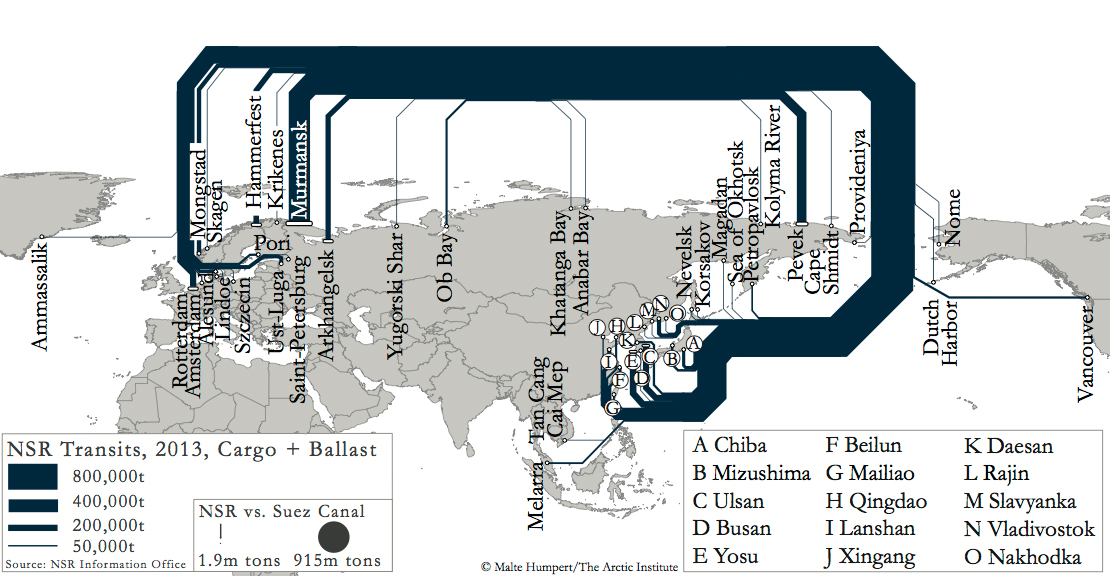 The Suez Canal carries nearly a billion tons of cargo each year. Even the most optimistic projections for the Northern Sea Route are in the tens of millions of tons. Furthermore, even if Arctic sea ice continues to decline, most Arctic shipping will be confined to summer and early fall for many years to come. Trans-Arctic shipping via the Northern Sea Route is attractive for some, but not all, vessels en route from Asia to Europe. Another type of shipping vessel also uses the Northern Sea Route: those going to and from mines, oil and gas fields, coastal communities, and other locations in the Russian Arctic. For these ships, the Arctic is not a convenient passageway but a specific destination. They cannot take another route. Even if the number of such vessels increases, they will not be diverting traffic away from the Suez Canal.

Myth #5. Arctic shipping is a source of international conflict 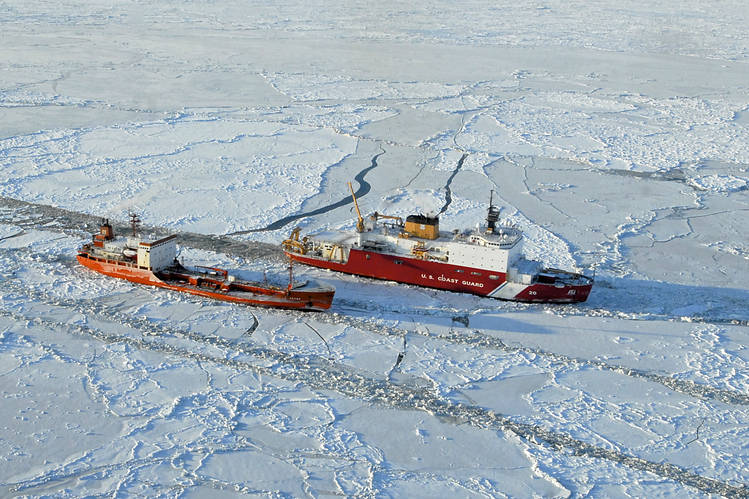 The U.S. Coast Guard Cutter Healy and a Russian tanker in the Bering Sea in 2012

As is common elsewhere in the world, there are some disputes over boundaries and sovereignty in Arctic waters. The U.S. and Canada both claim a portion of the Beaufort Sea. Canada and Greenland contest the ownership of Hans Island. Canada claims the Northwest Passage is an internal waterway, a position the U.S. disputes. The U.S. and Russia have signed an agreement about their maritime boundary in the Chukchi and Bering seas, but Russia has yet to ratify it. Even so, Russia and the U.S. cooperate regularly on numerous scientific, management, and enforcement efforts along what is the longest maritime boundary between two nations in the world. And Russia and the U.S. have a long history of cooperation regarding international fisheries agreements in the North Pacific and Bering Sea. Russian vessels have helped bring fuel to Alaska communities and have joined in the rescue of gray whales trapped in the ice near Alaska’s coast. All eight Arctic countries collaborate effectively on many issues through the Arctic Council, which was responsible for the Arctic Marine Shipping Assessment. Such cooperation has led to further action by Arctic countries, such as agreements on search and rescue as well as oil spill response. Arctic countries have also been instrumental in creating the new Polar Code of the International Maritime Organization (IMO), setting standards for operations in Arctic and Antarctic waters.

Myth #6. Each country must look after itself for infrastructure and support

The premise of the agreements on Arctic search and rescue and on oil spill response is that international cooperation helps everyone. The same is true for shipping. Alaska often laments the lack of an Arctic deep-water port north of Dutch Harbor in the Aleutian Islands. While geography has not helped Alaska in this regard, Provideniya Bay in Chukotka is a superb natural harbor close to the Bering Strait and has long been the gateway to the Northern Sea Route. Using Provideniya as a base for emergency response vessels, or as a port of refuge for ships in distress, would benefit mariners and could be developed as a business opportunity. Other approaches to cooperation are also likely to offer mutual benefits. 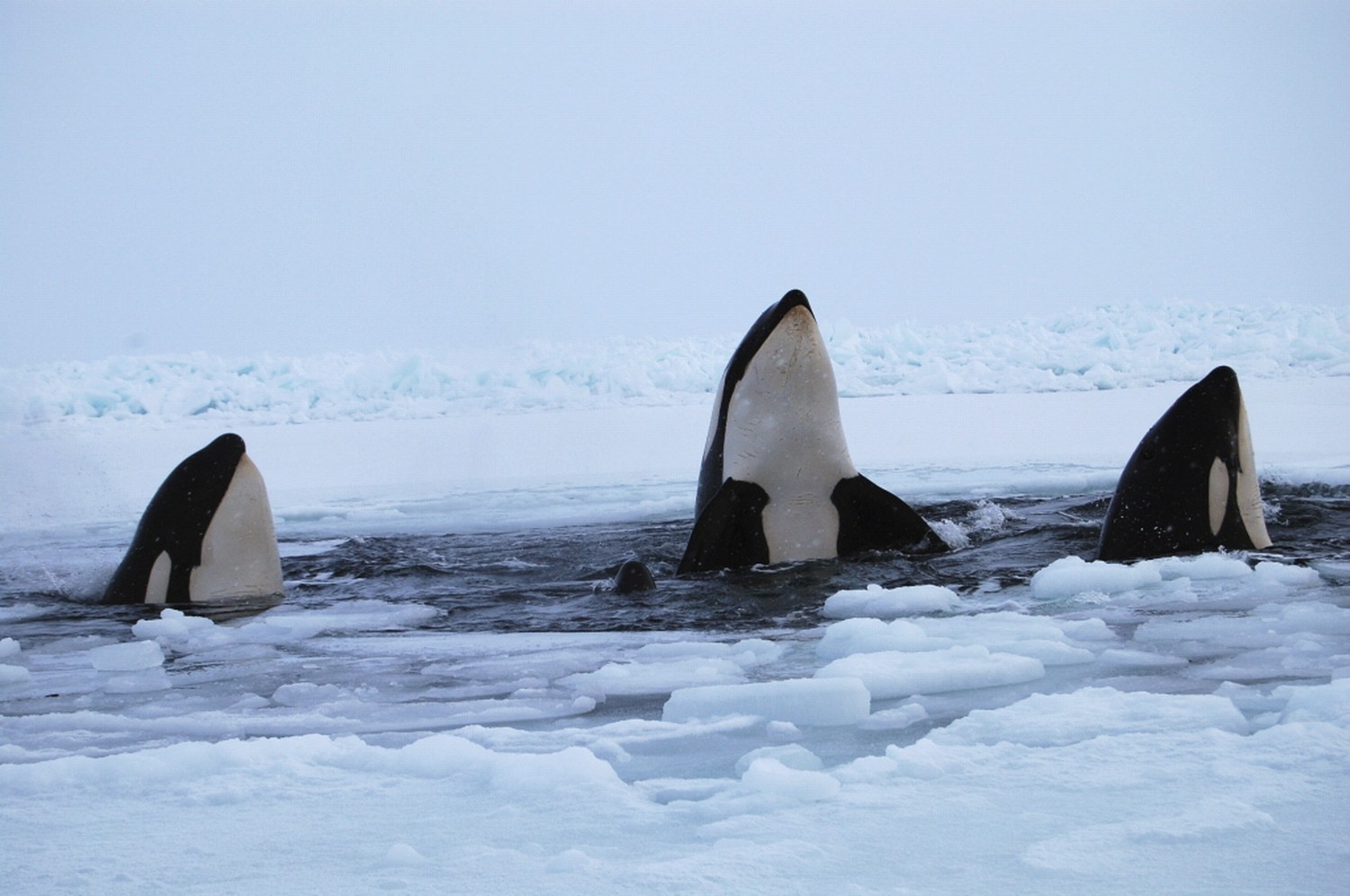 Three killer whales surface through a breathing hole in the ice of Hudson Bay near the community of Inukjuak, Quebec January 9, 2013

Commercial vessel traffic is a worldwide phenomenon. As with any large-scale activity, it is not without risk or impact—and risks and impacts in Arctic waters could be particularly grave. But risks can be managed and impacts can be reduced or avoided. The rate of accidents on the Northern Sea Route is lower than the global average, suggesting that experience and careful navigation can mitigate risk. In addition to preventing accidents, ships can avoid sensitive areas where marine mammals and seabirds are abundant, and they can take steps to reduce noise and pollution. A shorter path via the Northern Sea Route also means fewer emissions of pollutants and greenhouse gases. 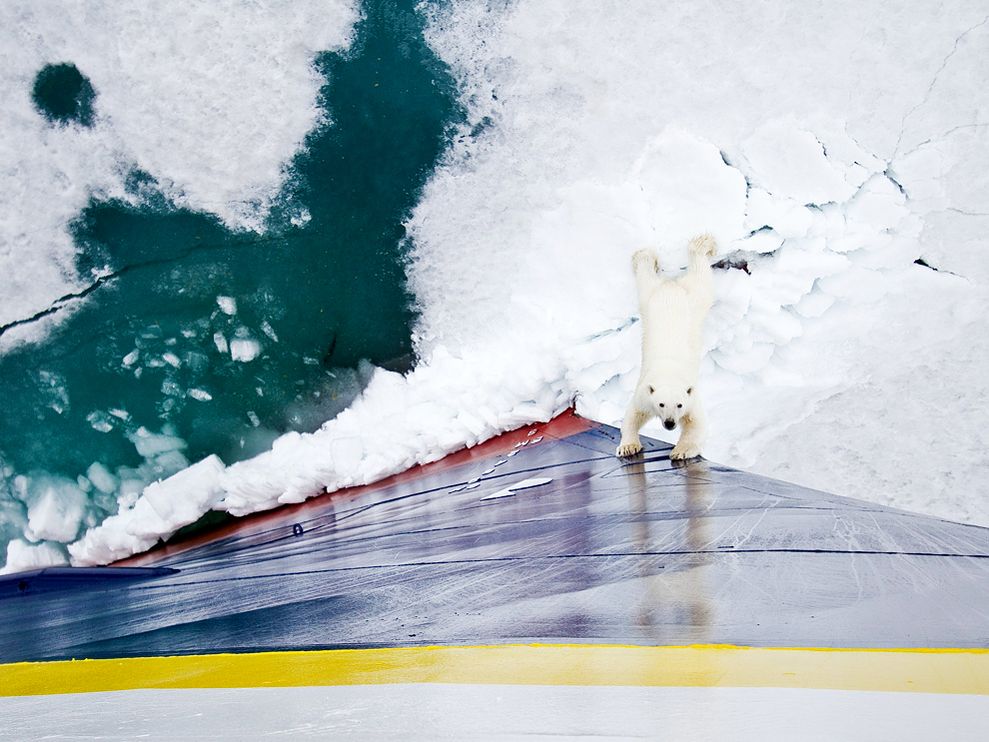 In many industries, taking care of the environment can help lower costs and avoid risk to the business and to employees. This is likely to be true for Arctic shipping, too. Steps that reduce accidents will also cut costs and limit environmental risk. Measures that help avoid environmentally sensitive areas and impacts to wildlife can demonstrate a commitment to sustainable practices, which is a major marketing tool for companies around the globe. Many regulations to protect wildlife will also keep ships safely away from shallow, dangerous waters and coasts, providing a double benefit. Sensible regulations can also reduce the likelihood of disruptions, allowing shipping companies as well as conservationists to focus their efforts on more productive activities. And high standards for safety and for environmental protection benefit companies already investing in crew training and Arctic-ready equipment. The IMO’s Polar Code is a good step forward, but it is not yet the ultimate solution.

In short, Arctic shipping is likely to continue to grow. What is needed is not further speculation about what could go wrong, but leadership and coordination to ensure strong, safe practices. The leaders of the shipping industry, in particular, have a lot to gain from good governance. So does the environment. This suggests there is plenty of room for common interests and potential collaborations. Nonetheless, the experienced and responsible voice of the shipping industry is likely to speak most forcefully to regulators and will be stronger if it is joined by conservationists and others with a stake in reducing risks and increasing benefits. This way, those most directly affected by regulations can demonstrate good governance by organizing themselves to develop and implement best practices, even as they call on governments to require that everyone meets the same high standards, and the companies already committed to high standards will be more competitive and will be rewarded for their responsible conduct. And the level of international cooperation in the Arctic, building on that shown by the Arctic Council, will be further increased to the benefit of all.