Are We Paying too much Attention to the Assistant Secretary of State?

Reflections in the footsteps of Victoria Nuland’s Transcaucasia tour

Interest in Nuland is being fueled by a distorted assessment of her alleged role in Maidan, her scandalous distribution of baked goods among protestors, and her loud statements about the American promotion of democracy in Ukraine before, during, and after the political upheaval in Kiev. 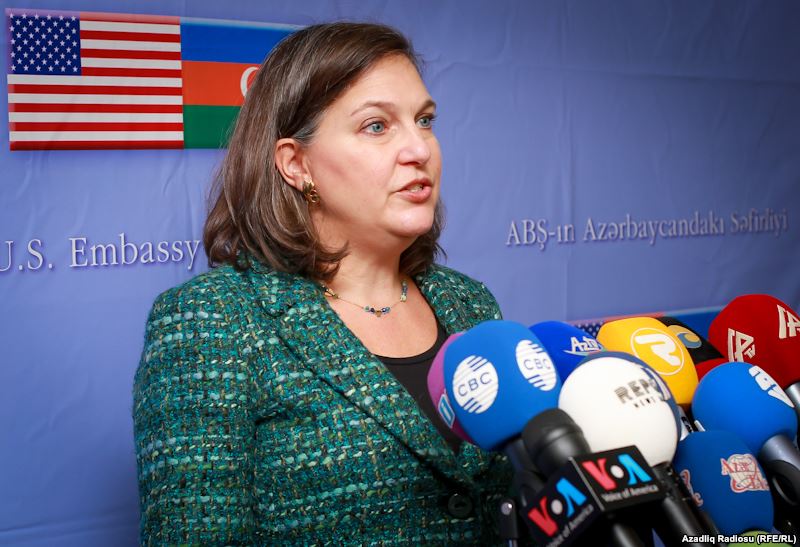 Nuland’s activities, both slightly over a year ago and today, are interpreted in a very negative light. She is indeed demonized in the eyes of many Russians, which is probably due to emotions rather than to her objective involvement in current events. To tell the truth, she is far from the mastermind behind the color revolutions that the Russian press is eager to portray her as. Once again, Russians are holier than the Pope: Washington insiders, some of them knowledgeable and influential, are not hiding their skepticism about Nuland’s real political weight, and they certainly do not share the revolutionary pathos of her democratic ideology-permeated speeches. In some cases her rhetoric evokes condescending smiles, in other cases difficult-to-conceal irritation.

Nonetheless, in light of Nuland’s recent trip to Transcaucasia, newspapers and experts have focused an unreasonable amount of attention on what she said and howshe said it, whom she met with, what her goals were, what resonance her trip had with the public – particularly among opposition forces, for whom she does not conceal her sympathy – and finally, what the internal context was of the events against whose backdrop Nuland made her visit.

Should we attach importance to Nuland’s sudden – as the newspapers write – visit to Russia’s strategic rear? And if so, what exactly is that value, taking into account the figure of Nuland herself and the general U.S. strategy in the post-Soviet space, which is not new?

Judging by how ready the Transcaucasian heads of state were to meet with Nuland, the question involuntarily arises – where did such piety for the political shuttle of Euro-Atlanticism come from? Formally, the State Department has 23 assistant secretaries of state. We know nothing about the activities of the other 22 – not even their names. In that sense, the work of the U.S. State Department is very centralized – to a much greater degree, for example, than in Russia, where deputy ministers in charge of particular areas and representatives of Russia in key international organizations have considerable public weight. Who in Russia, for example, has heard of U.S. Deputy Secretary of State Tony Blinken in the broadcast media? Nuland does a good job of imitating activity and draws attention to herself, but how much of a real influence does she have on Washington’s foreign policy? If we can trust public sources, the absence of her name on Russia’s counter-sanctions list serves as indirect evidence of her role in the American foreign policy process.

Nuland is a nonpartisan career diplomat who has worked under both Republican and Democratic administrations. She does not have a specialized education (she only has a bachelor’s degree from the prestigious Brown University). She studied Russian literature and history during her three-year bachelor’s program, which can hardly be called an in-depth specialization. During her work as a diplomat, she was primarily engaged in Russia and the post-Soviet space, including as deputy director of the State Department’s office for former Soviet Union affairs. She was in charge of nuclear disarmament for Ukraine and Kazakhstan under the direction of Richard Lugar, and she served as chief of staff to Deputy Secretary of State Strobe Talbott. Nuland was posted at the U.S. Embassy in Moscow at the beginning of the 1990s. She made her first foray into Russian studies in university, where she was influenced by the traditional ideas of American Sovietology – a highly Russophobic science. Nuland’s views were heavily influenced by her husband Robert Kagan, a famous American neoconservative and apologist for U.S. liberal interventionism in the late 1990s and early 2000s who wrote the famous books Of Paradise and Power: America and Europe in the New World Order and The Return of History and the End of Dreams. 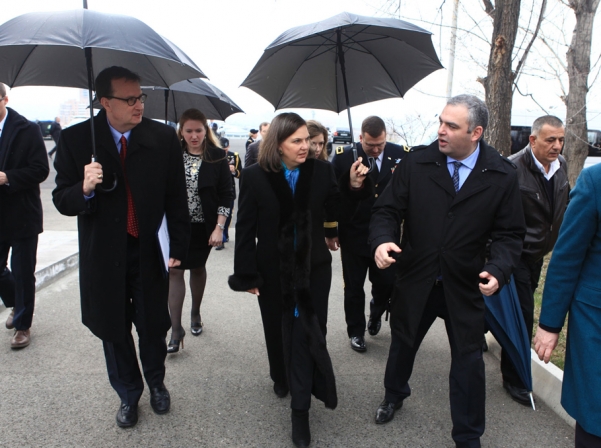 Prior to her current post, Nuland was the official State Department spokesperson, in which position she was replaced by the nearly odious Jen Psaki. She also served as U.S. ambassador to NATO, where she actively lobbied for NATO expansion into the East, pushed through the first-ever application of Article 5 of the North Atlantic Treaty after the terrorist attacks of September 11, 2001, and helped create the NATO-Russia Council.

I should note that Nuland’s career path is very unusual even for the U.S., not to mention for her colleagues in Russia – U.S. Permanent Representative to NATO, State Department spokesperson, Assistant Secretary of State. It is suspected that Nuland’s excessive activity has constantly kept her in the strategically important areas of U.S. foreign policy on the one hand, but prevented her from rising above a certain official level on the other. In some cases, it could even be said that she has been demoted. Would the press be so eager to discuss the Transcaucasia visit if it had been Jen Psaki instead of Victoria Nuland? That is hardly likely. Meanwhile, we are talking about a comparable official capacity, especially in light of Psaki’s recently announced move to the Obama staff.

Nuland is part of a fairly large and expanding cohort of professional Russophobes who have acted as key figures on Russia in the last two administrations. But if we must choose between political appointees such as Mike McFaul and Nuland, we should of course beware of the latter. People like Nuland do not go away when the administration changes; they continue, often invisibly, but they consistently translate their convictions into foreign policy practice. Nonetheless, it is important to adequately assess their place in the job hierarchy. 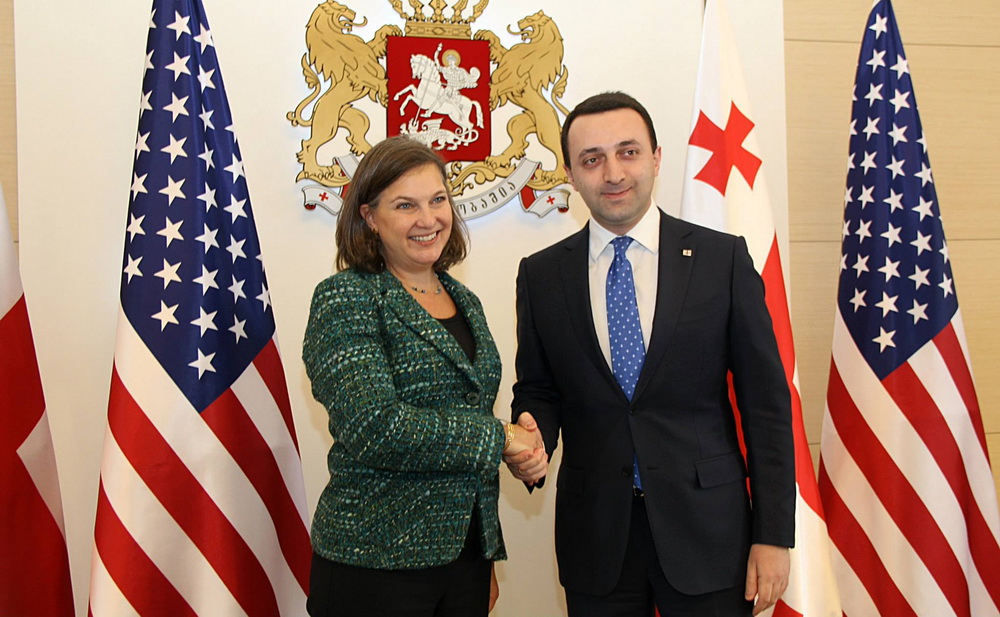 What generalizations can be drawn from Nuland’s Transcaucasia tour without going into the details of it – numerically small and hardly significant? The first and main conclusion is that the Americans have not abandoned their “grinding-down” strategy with which they entered the post-Soviet space in the 21st century. Its essence was and still is to form and support a network of not particularly strong or sustainable new states in the space of the former socialist world, and to involve them in cooperation and relations “of asymmetric interdependence on the West; the prized help of the U.S., making them amenable to American recommendations” [Bogaturov 2004].

The strategy to “geopolitically fragment” Russia’s sphere of priority security interests requires very subtle political tools. The Americans are not willing to go all in, spoiling relations with the countries in a region of geostrategic importance where they have an enemy – Russia. Using a very astute observation by Johns Hopkins University Professor Daniel Deudney, the Americans are carrying out this strategy on the basis of the formerly Soviet formula of peaceful coexistence. The idea is as follows: while trying to keep the peace – equal political relations at the official diplomatic level between states – the U.S. simultaneously deploys activity to induce opposition sentiment in post-Soviet societies, stimulating political conflict and dissension that could eventually soften the authoritarian power structure and lead to regime change. From this perspective, Nuland does actually begin to look particularly sinister, at least to some observers. It is not by chance that the media has expressed the idea that a visit by Nuland to any country is a “black mark” on the local authorities, that it does not bode well for political stability and the rise of opposition demonstrations. From this light, Nuland’s job level begins to comply with the requirements of her tasks. In her current position, she is the ideal candidate to engage in subversive activity.

Russia cannot help but be troubled by intensified American subversion efforts in the zone of our country’s immediate interests, especially as complications rise on the western flank of the post-Soviet space. This is definitely bad news. However, there is also reason for cautious optimism. By sending the Assistant Secretary of State on this “mission,” the American diplomatic establishment is deliberately understating the level of its representation and operational work, thereby indicating that it is still adhering to the peaceful coexistence formula at an intergovernmental level with these countries. This situation cannot be compared with the Ukraine scenario. As might be expected, Washington is not yet nurturing any plans for a fundamental policy change in the region. At most, we can talk about monitoring the situation in the region and assessing the strength of our position in it. That is good news.