Is the US Destined for War with China? The U.S. Elite Discusses the Thucydides Trap

While the discussion about a Sino-American war until recently was still confined to some think tanks, military experts and the Pentagon, TX Hammes Offshore Control, the CSBA Airsea Battle concept or RAND „War with China“, Harvard professor Graham Allinson´s book „Destined for War with China- How to avoid the Thucydides trap? started an open discussion. among the political and economic elite. Graham Allinson studied Greece and the father of history Thudycides who focused in his writings about the Peleponesian wars on the question of the inevitability of war between rising and declining powers. Allison also was the author of the book „The essence of decision“ about the Cuban missile crisis which brought the world at the abyss of nuclear war and combined these studies to his new book. Therefore he made research of historical conflicts between rising and declining powers and came to the conclusion that in the last 500 years 12 of 16 conflicts ended in a war, while only 4 could be settled peacefully, namely the conflict between Portugal and Spain, the conflict between the USA and Great Britain, the conflict between the USA and the Soviet Union and the rise of Germany after the reunification. Allison is also head of the Thucydides Project oft he Harvard University and his book is the product of the studies and discussions of this project. Therefore also the US elites beyond the security establishment are now discussing the question of a Sino-American war and how to prevent it publicly. Allison claims that neither China nor the USA wanted a war, but could be drawn into it by a third party or conflict, be it North Korea, Taiwan, the South China or the East China Sea, especially as cyberspace and space become accelerants for the escalation ladder in case of a conflict- similar to the results oft he CSBA study „Rethinking Armageddon“ and the Second Nuclear Age. 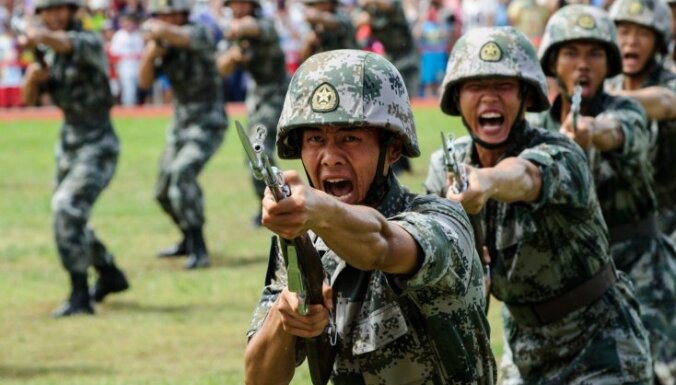 While China hawks and John Mearsheimer see a clash unavoidable and propose a policy of economic and psychological warfare and policy of military strength as a recipe against a Sino-American war. Kyle Bass, member of the Committee for The Present Danger: China also interviewed Allinson and questioned the assumption of a powerful China and the inevitable rise of China as its economy was state capitalistic and its financial system not that strong as most experts believe. In the 60s many experts predicted that the Soviet Union would surpass the USA, in the 80s it was Japan, then the EU and it didn´t happen. The interview and debate is available at:

At Harvard Graham Allison had a discussion with China old hand Henry Kissinger and they agreed that a Sino-American war could happen as nobody thinks that it could happen and that a pattern of getting accustomed to regular conflicts could lead to the situation that a conflict could be underestimated and escalate like the assasination of the Austrian Archduke in Serbia caused WW 1. Kissingers thinks that the USA should not try to boycott China´s New Silk Road, but become member of the Belt and Road Initiative (BRI) and cooperate with China. He also thinks that the South China Sea, Hongkong and Taiwan can be regulated by a compromise.Kissinger sees the most important threat in the nuclear proliferation and North Korea and Allison and he think about a solution from a negotiated solution of the Korean question, a denuclearized, united Korean peninsula, a Finlandization, the withdrawal of US troops. etc.

Graham Allison also discussed the question of a Sino-American war with General retired David Petraeus who also was his interviewer at the Munich Security Conference 2020 in Munich where this discussion got internationalized for the first time:

“The remainder of 2020 could pose as severe a test for the US and China as the final five months of 1941 did for the United States and Japan,” said Graham Allison, professor of government at Harvard University.

Allison said Japan’s surprise air strike on Pearl Harbor on December 7, 1941 – which dragged the US into World War II – had been beyond Washington’s imagination, that “a nation less than one-quarter the size of the US would launch a bolt from the blue against the most powerful nation in the world”.

“But we should remember that when we say something is inconceivable, this is not a claim about what is possible in the world, but rather about what our minds can conceive,” he said.

Although there appears to be little appetite in either country to fight a catastrophic war, other analysts also said there was still a growing risk of a confrontation, which was unlikely to be premeditated or planned.

“China has seen the coronavirus as an opportunity to exploit US weaknesses, and so China might be tempted to resolve territorial disputes through force. I think there’s a real possibility of miscalculation by Beijing in assuming the US won’t or can’t respond militarily,” said Malcolm Davis, a senior analyst in the Australian Strategic Policy Institute.

Yuan Peng, president of the China Institutes of Contemporary International Relations, a government-linked think tank in Beijing, drew parallels between the post-coronavirus world and the situation after World War I more than a century ago.

Yuan’s think tank has previously said Beijing should prepare for armed confrontation with Washington amid the worst anti-China backlash since the Tiananmen crackdown in 1989, according to Reuters, citing an internal report..

We see a process of rethinking old assumptions, searching for an US grand strategy which has now openly begun in the US elites. It remains to be seen how this will influence Trump and the coming US goverments. However Allison thinks that while Trump might be impulsive he had the advantage that he wasn´t thinking in the traditional conventional wisdom of the former US elites who themselves as he selfcritically points out did a very poor job and made a lot wrong in the past.

OTHER RECORDS
Arguments for a MIX of Industrial Ordnungspolitik and Market Elements. What About Skolkovo?
Ralf Ostner
The Technological Revolution in China and the USA: What About Europe and Eurasia?
Ralf Ostner
RECP, START and Germany´s Indo-Pacific Strategy
Ralf Ostner
Tags
USA, China, war, Japan