Karaganov and Russia´s new mission as supplier of international security

In an interview with the outlet vz.ru, Sergei Karaganov, a former Putin adviser, and dean of the Faculty of World Economy and International Affairs at the Higher Research University, revives a theme from Soviet times that Russia is the bulwark of global peace and the struggle for peace must be the defining idea of Russian foreign policy. When the Soviet Union collapsed, countries that were considered peace-loving went berserk. Russia’s military revival helped restore stability and balance although the situation has not yet stabilized.Karaganov hast he idea of a new mission for Russia as supplier of international security.A term which NATO also uses, but this time from the Russian side. 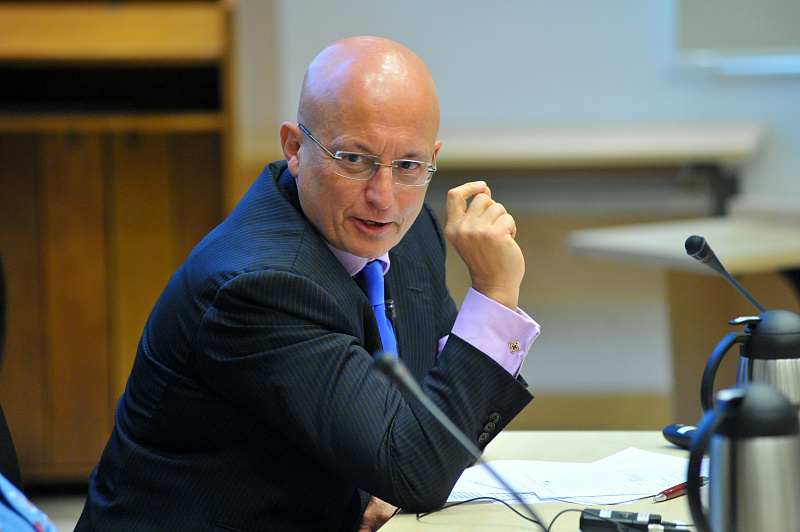 While calling for peace due to the new sources of global instability that could precipitate an armed conflict, Karaganov, who has become an apostle of Russian authoritarianism, believes that war has a purifying effect and that countries need the threat of an enemy to organize themselves. Wars bring to the fore leaders like Churchill while prolonged peace is responsible for the prevalence of mediocre leaders in the West.

Karaganov believes that the smartphone and the internet have also had a debilitating effect and he would train the new elite in isolation from these nuisances. (MEMRI).

Karaganov was former adviser of Putin, is still influential as Russian chief idelogue of the Russian Asian pivot and Eurasia. He published many articles in Russia in Global Affairs, is publisher and is very popular at Russia´s Valdai Club, the Russian Bilderberger as the St. Petersburg Economic Summit is comparable to Davos. While some see Russia´s future in a „resource empire“ in a multipolar world as Gazprom adviser to he EU Prof. Rahr, Karaganov proposes a new mission for Russia : Russia as supplier of international security and stablity. How can Russia do this and by which means? Karaganov is just giving very few ideas: Russia is economically weak , but militaryly strong., especially in ICBMs. What Karagonov doesn´t say:If it wants to supply international security beyond its nuclear weapons it risks an imperial overstretch due to he fact that Russia´s gross national product ist he size of Belgium.. Maybe it can manage Ukraine, Syria or Venezuela, support General Haftar,but more of this would erode its weak economic base. Therefore Karaganov´s main idea is mutual international nuclear deterenece and the balance of the relations between Russia , the USA and China in a way that a war should not be possible. That´s the most concrete idea he has and he also says that China is not and won´t become an ally and the USA is the strategic competitor.

I think this multilateral deterrence is important as in my opinion Trump if reelected will escalate the sinoamerican conflict and wants to get his deal with China which makes China the longterm 2nd world power while the USA has to be No.1. America First. As the Chinese won´t accept this, Trump will start a sinoamerican war which uses the Offshore Controll strategy TX Hammes proposes. What should Russia do in such a situation? Trump thinks that the WW1 lasted 4 and WW2 6 years to make the decision and will try to decide the sinoamerican war within this timeline. Can Russia deter him from doing so? Won´t Russia to become the ally of China under theses circumstances? Would Russia use its nuclear deterrence to deter the USA to strangulate China by Offshore Controll or would the Chinese expand their ICBM arsenals that they don´t need the Russian nuclear deterrence. This would be the end to Karaganov`s aspiration for a Russia a supplier for international security.

Karaganov is right, when he says that the actual and future theater of war and international relations will be influenced by postnuclear weapons as cyber- and spaceweapons, global strike weapons, mininukes, neutron bombs, haystack weapons, electronic warfare, EMPs etc. In this position he has the same analysis as the US-Thinktank Centre for Strategic Budgetary Assessment CSBA, father of Airseabattle and its study „Rethinking Armageedon“ and „The Second Nuclear Age“. The international situtation is much more multipolar, interconnected and instable because the old bipolar constellation of the Cold War with its limited arsenals of weapons doesn´t exist anymore. Karaganov proposes strategic arms limitation talks between the USA, Russia and China. Not a bad idea.

But the agenda would be much more complex and difficult as the old INF- and START deals and if a cybersecurity treaty could be realized is the big question. While traditional arms can be located very easily and the date and space of an aggression can be defined very easyly as tanks, rockets and traditional weapons have to cross a defined border, a cyberwar is different because of the intransparent and secretive structures of the cyberspace. First you don´t know if it is a attack or a technological mistake , secondly the aggressor is not that easy to detect and states and their cybercommands also hire hacker groups which creates a subversive intransparent structure that you don´t know if a hacker group or a state behind the attack. Therefore cybersecurity treaties are much complicated or impossible as you have a different security structure compared to traditional weapons.

Karaganov´s thesis on democracy are too pessimistic. Authotarian meditocracy is also often more a myth than really the selection of the best. He thinks he is the best, how he was grown upand educated and thinks that this old education system shuld be reintroduced. That war is bringing a nation the best leaders is just warmongering. And about the television and internet generation there is also a very interesting study and book: iGen by Jean M. Twenge. The question is if you really need an Ivy League without smartphone or to adopt the new communication structure for this elite and the education system. Karaganov thinks too much in old terms: In 1964, Marshall McLuhan introduced the phrase: “The Medium is the Message” in his book, Understanding Media: The Extensions of Man.Very similar Karaganov´s critic. It is correct in the sense that the new media produce a generation that is not that much able anymore to read long, complex texts, but wants short clips or as some Russian philosopher spoke of „clip policies“. However if a state uses the new media as TV or You Tube as education mean it has more to do with the lack of mass educational contents and its distribution than with the media itself. Even Virtual Reality could be a phantastic education instrument if you experience history, geography or whatever if you travel through the historic events or the country ny 3 D. It´s not the media in itself, but the lack of the message due to antimoderist thinking, capitalist quota economy and authoritarian structures which prevent that the new media are used for educational purposes.

For me Karaganov´s new mission for Russia as a supplier of international security/global peace is a dangerous road to nowhere. He exaggerates Russia´s potential in the international order and if the Chinese raise their ICBM arsenals then there is no mission for Russia as supplier of international security and role between the USA and China anymore except start a war or become a war ally . And he thinks you need external enemies to exist and hat wars bring the nationas the best leaders which shows the main flaw in his thinking.

Best option for Germany/the EU and Russia: Try to cooperate, make a New East policy, ecologival alliance, European Silkroad and to keep out of the coming sinoamerican conflict and war. Be the lauging third and not ally of the Chinese or the Americans. But Karaganov is beating the war drum, thinks that wars bring a nation the best leaders, is the father of all things (German: „Der Krieg ist der Vater aller Dinge“) and is very narrow minded. Good to know that he is former adviser of Putin and not his actual adviser. Karaganov normally uses Russia in Global Affairs as his outlet, but till now there is no article there, but he uses a second-hand media outlet. Russia´s situation is desperate because of its eroding economy, but the concept of a resource empire in a multipolar world is as desperate as Karaganov´s mission of Russia as supplier of international security. Hopefully Putin and Lawrow are rationale enough not to have a adventurerer as their adviser. But if there are no signals from the West, a New East Policy or whatever, they could make a desperate alliance with the devil.

OTHER RECORDS
Arguments for a MIX of Industrial Ordnungspolitik and Market Elements. What About Skolkovo?
Ralf Ostner
The Technological Revolution in China and the USA: What About Europe and Eurasia?
Ralf Ostner
RECP, START and Germany´s Indo-Pacific Strategy
Ralf Ostner
Tags
Russia, Vladimir Putin, USA, China, Security