Russian Diplomacy with Turkey over Syria

U.S. President Donald Trump announced his intentions of withdrawing U.S. forces from Syria in December 2018. This announcement came as a surprise to many members of Congress and led to the abrupt resignation of Secretary of Defense James Mattis. After defeating the Islamic State (IS) in Syria, President Trump believed U.S. forces could begin leaving the region. However, even with the defeat of IS, many U.S. political leaders fear for the safety of the Kurds remaining inside Syria. During the war, the Syrian Kurds formed militia groups known as People’s Protection Units or YPGs that protected local Kurdish communities from IS fighters. U.S. military leaders believed the YPGs played a critical role helping the U.S. defeat IS. Unfortunately, despite their contributions in the war, Turkish president Recep Erdogan does not share the same gratitude for the YPGs as the U.S. Erdogan believes the YPGs represent an extension of the Kurdish Worker’s Party, more commonly known as the PKK, which he views as a terrorist group. The question remains how will Turkey treat the Syrian Kurds once U.S. forces leave the region? This question presents a dilemma for U.S. policy makers. Although the U.S. has achieved a great victory against IS it does not want to see their close allies, the Kurds, targeted by Turkey in a new armed conflict. Concerns over security for the Syrian Kurds has caused a delay in the withdrawal of U.S. forces out of Syria. Currently Congress and the Trump administration continue to debate on not only when U.S. forces can leave Syria, but if they ever can. This dilemma presents an opportunity for Russia to play an important diplomatic role with Turkey, guaranteeing the safety and security for the Kurds so that U.S. policy makers can agree on when American forces can withdraw from the region. 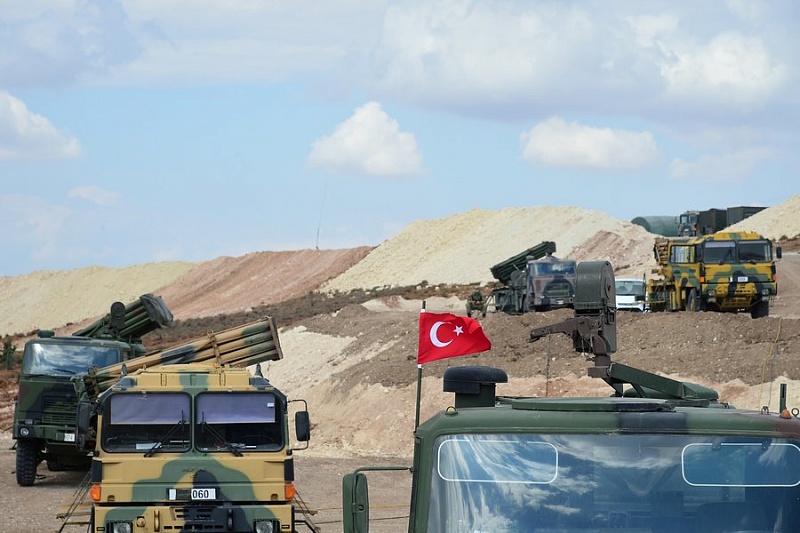 First consider the implications if Russia does not intervene diplomatically on the issue of the Kurds; what will this mean? If Russia does nothing, then U.S. forces will remain permanently based in Syria to protect the local Kurdish communities. Currently Turkey has an ongoing military campaign inside Syria called Operation Olive Branch. This operation launched since January 2018 has displaced hundreds of thousands of people, trigger a new refugee crisis, and raised allegations of human rights abuses and war crimes committed by Turkish forces. This has sparked outrage in the international community and has garnered support for the Syrian Kurds against Turkey. Without any resolution or diplomatic intervention, the conflict between the Kurds and Turkey can intensify. A result of an intensified conflict includes increased militarization and international support for the Kurds in northern Syria. Ultimately, a militarily invigorated Kurdish force, supplied and supported by the West, and able to exercise practical autonomy in Northern Syria, will make it more difficult for Assad’s government to negotiate the reintegration of the Kurds back into Syrian government control. Therefore, an intensified conflict between Turkey and the Syrian Kurds will make it more difficult to end the ongoing Syrian Civil War.

Diplomatically the U.S. has attempted to reach an agreement with Turkey on the question of the Syrian Kurds and the eventual withdrawal of U.S. forces, but so far, all attempts have failed. U.S. National Security Advisor John Bolton has had ongoing discussions with his Turkish counterparts, but these ongoing negotiations have stalled over the issue of security guarantees for the Syrian Kurds. Whereas the U.S. sees the Kurds as critically important allies against IS, Turkish president Erdogan takes a completely different view. In a recent Al-Jazeera article, Erdogan stated, “If the U.S. sees these groups as my Kurdish brothers, they are seriously mistaken.” Before the U.S. could agree to an eventual withdrawal from Syria, they need Turkey to provide assurances of guaranteed protection for the Syrian Kurds and the YPG units. So far, Turkey has refused. In the same Al-Jazeera article, Sinan Ulgen, the chairman of Center of Economics and Foreign Policy Studies, argues that Turkey has a “Trump Card” in negotiating with the U.S. on this issue. The point argued in the Al-Jazeera article is it is more important for the U.S. to withdraw from Syria then it is for Turkey to live in peace with the YPG in northern Syria. Therefore, the U.S. must negotiate from a weaker position trying to convince Turkey not to attack the YPGs. Once achieving this, the U.S. can begin a withdrawing from Syria. This explains why on-going negotiations between the U.S. and Turkey have not produced any tangible results.

Russia already possesses considerable diplomatic leverage over Turkey through its energy policies. By the 21st century, foreign imported energy accounts for 72% of Turkey’s energy needs. Due to this dependence on energy from foreign sources, Turkish president Recep Erdogan has strongly advocated for a domestic source of energy to meet Turkey’s growing energy demand. President Erdogan believes the construction of Turkey’s first nuclear power plant, known as the Akkuyu power plant, will help to meet the growing demand of energy consumption in Turkey and make it less reliant on foreign imported energy. The construction and operation of Akkuyu requires extensive investment and financing, estimated to cost $20 billion upon completion. However, Turkey does not possess the financial resources or infrastructure to build and operate Akkuyu. Russia on the other hand does and has negotiated a deal with Turkey allowing it to construct and operate Turkey’s first nuclear power plant. The way Russia can finance Turkey’s Akkuyu power is through a special program known as “BOO,” Build Own Operate. The “BOO” program allows Russian companies to construct, own, and operate plants in developing countries that may not have the resources to build themselves. Through the “BOO” program, these developing countries can over time reimburse Russia. In a RIAC article from March 20, 2019, the writer Peter Kortunov explains how a Russian joint stock company will own and operate the Akkuyu power plant. Once the plant begins operations, the Turkish utility company TETASH will purchase at least 70% of energy from Blocks 1 and 2 and 30% from Blocks 3 and 4 of the Akkuyu power plant. After 15 years Russia will receive total reimbursement for the expenses in financing, constructing, and operating the Akkuyu plant. If the “BOO” program is successful in Turkey, Russia can carry out similar “BOO” programs in other developing countries. Success in Turkey means a larger market for Russian firms like ROSATOM to build future nuclear plants in other parts of the world. If Turkey remains involved in a protracted, intense conflict with the Kurds in northern Syria this can negatively impact Turkey’s economy and its ability to pay back Russia through the “BOO” program. What is the current state of the Turkish economy?

Currently the Turkish economy has taken a downturn. According to a Foreign Policy article in April 29, 2019, unemployment has gone up in Turkey and inflation has risen 20%, the highest it has been in over a decade. Politically, Erdogan’s political party has suffered because of the economic downturn. In this year’s elections, Erdogan’s party, the Justice and Development Party, AKP, has lost mayoral elections in Ankara and Istanbul which reflects the growing dissatisfaction the Turkish people have against Erdogan’s government. Even with high inflation Erdogan’s fiscal policy remains the same, the government spends more money in hopes of trying to stimulate the economy. Many economists would argue that during periods of high inflation increased government spending should not be recommended. Yet Erdogan continues to support these measures in hopes of gaining more votes for his political party, the AKP. In addition, Erdogan hopes to garner popular votes for his political party by continuing an armed campaign against the Syrian Kurds. The current economic crisis and political fallout in Turkey provides valuable insight on the consequences of Turkey’s continued armed campaign inside Syria. More importantly for Russia, this economic downturn in Turkey puts into question Turkey’s ability to pay back the expenses used in constructing the Akkuyu power plant. By the time the Akkuyu power plant becomes operational in 2023 there is no guarantee that Erdogan or the AKP will be in power in Turkey or what the state of the economy would be. Whatever government is in power in Turkey after 2023 would they be able to reimburse Russia for the cost of constructing the plant in 15 years? If the “BOO” program does not achieve success in Turkey would Russia continue to implement similar programs in other countries? Turkey is the first test case for the “BOO” program and its success hinges on Turkey’s ability to pay back Russia for its first nuclear power plant.

The U.S. does not have popular domestic support to run a full-scale military operation in Syria. The U.S. had spent years fighting in the neighboring country of Iraq where it suffered thousands of casualties and in Afghanistan, after nearly two decades, the U.S. continues to fight the War on Terror. This explains why U.S. policy makers want to find a way to withdraw American forces out of Syria after achieving success against IS. Yet at the same time, the U.S. will not allow the Syrian Kurds to become targets of Turkey or a resurgent IS and wants security guarantees for them before the U.S. can begin a withdrawal. Russia has invested heavily in Turkey’s first nuclear power plant and these investments could suffer an economic loss if Turkey does not improve its economy and end high inflation. Fighting a war in Syria would only worsen the Turkish economy and hurt Russia’s extensive investments with the Akkuyu power plant. The failure or success of the “BOO” program in Turkey will determine if Russia can pursue future endeavors of the “BOO” program in other countries. Therefore, it would be in Russia’s interest to help find a solution that can placate both Turkey and the Syrian Kurds so the U.S. can leave Syria, knowing a peaceful settlement has been reached.