The Covid-19 pandemic has prompted many governments to foster domestic tourism and avoid long-distance holidays. In such circumstances, a number of citizens have (re-)discovered their homeland, with Muscovites having realized that Mount Elbrus in the Caucasus can be just as breathtaking as Mont Blanc and Vladivostok as exotic as Vancouver in Canada. The same applies to the French who seem to have taken advantage of the potential offered by the remains of the former Empire, which extended from Asia (Indochina) to Latin America (French Guiana) only a few decades ago. 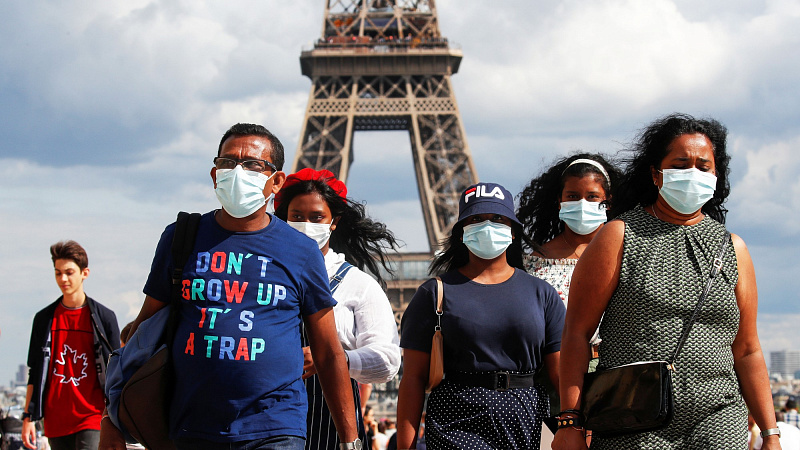 In contrast to the United Kingdom, France is usually not particularly keen on promoting what remains of its colonies, with only a few French nationals travelling to French Polynesia, Guadeloupe, Martinique, French Guiana, Mayotte or Saint-Barthélemy, to name but a few places. In fact, were the French to decide to remain exclusively in France or its overseas territories, they would be able to travel to five continents (aside from Asia only), as the country comprises more than 1,300 islands from the Pacific to the Antarctica.

The number is so substantial that Paris doesn’t even have a clear answer as to how many French islands there are out there, with some officials claiming that some are rocks rather than islands. If you ask people, most of them won’t be able to tell you where Bora Bora and Tahiti are on a map. All in all, France’s continental shelf covers an area of 730,000 km2, in addition to the 10.2 million km2 of maritime zones under French jurisdiction (internal waters and territorial sea), making it the largest maritime territory in the world.

If one agrees with the requirements of the UN Convention on the Law of the Sea of 1982 and the definition of an exclusive economic zone (EEZ), then France has a total of 11,691,000 km2 of EEZ, while the figure stands at 11,351,000 km2 the United States and 7, 566,673 km2 for Russia. Although it may be a way to tease friends from Luxembourg by telling them you travel within France during Covid-19 times by showing off your coconut drink in Tahiti, the French islands are also an inherent component of national soft power, international prestige and military might. 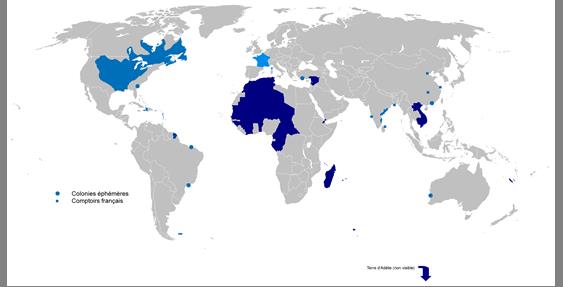 The collapse of one of the largest colonial empires

As a student in France, you will never hear about the French islands, whether in primary school or university. As a matter of fact, large territories, such as Corsica close to Italy, barely feature on French school maps, and a recent Al Jazeera documentary even mentioned the fact that the French study the history of extinct volcanoes in the Auvergne, whereas they have active volcanoes on Reunion Island.

This taboo concerning the islands, or even vast areas, such as French Guiana, located between Brazil to the east and south and Suriname to the west, dates back to the post-World War II period, when France had to abandon its colonial empire piece by piece under internal and external (the United States and the USSR) demands. For decades, the French used military power to maintain their empire and to counter autonomist movements. French soldiers withdrew from French Indochina in the aftermath of the Geneva Agreement of 1954, from African and Maghreb countries in the 1950s and 1960s, and Algeria after a war that claimed half a million to two million lives.

The territories Paris has managed to preserve to this day are often the result of combined military and economic pressures, and although the modern days settings make the situation more manageable compared to the 1960s, learning about the overseas territories essentially involves teaching about slavery during the French colonial empire as much as the struggle in which the country persisted to retain its international influence.

To this day, the French Armed Forces are still active in remote places, as such presence ensures that attempts at autonomy remain muted. As such, Paris has no interest in openly stating what is being done in some of these areas. For example, between 175 and 200 military nuclear experiments have been carried out as recently as 1996 in Moruroa in the Pacific Ocean despite the opposition both on the part of locals and the international community.

Therefore, the relationship of French officials and citizens from the metropole remains ambiguous to this day, a mixture of pride of being part a nation capable of wielding worldwide influence combined with a shameful history of colonialism and nuclear experiments.

France as a country in Latin America, North America, Antarctica, India, Africa and the Pacific

Although the origin of the islands largely remains a national taboo, they can also be seen as an asset for international prestige and soft power. As such, France is one of the few countries that can claim to be European and American (Latin America and North America), with French Guiana bordering Brazil and St Pierre and Miquelon bordering Canada.

In 2020, the incumbent French President Emmanuel Macron opposed Jair Bolsonaro’s policies in Brazil during the massive forest fires saying that France, as a Latin American country, has the grounds to be worried about Brazil’s environmental policies.

French Guiana is a key asset for Paris, the European Union and NATO. Paris being a member of the Alliance, NATO becomes implicitly as well as de jure implemented in Latin America. Moreover, the Amazonian park of Guiana is the largest national park in the European Union, and the currency used in the region is the euro, which strengthens the EU’s economic influence worldwide. In 2017, Guiana’s GDP at market exchange rates was €4.59 billion, ranking it as the 11th largest in South America.

The territory is also renowned for its space activities and hosting Europe’s spaceport (Guiana Space Centre). The fact that it located near the equator ultimately means that less energy is needed to maneuver a spacecraft into geostationary orbit. European rockets are launched eastwards to take advantage of the angular momentum provided by the Earth’s rotation. While it is an asset for France, it is also one of the main centers of the European Space Agency (ESA), which contributes to the international prestige of both Paris and Brussels.

The relationship with America is not limited to French Guiana, as France is in possession of St Martin, Saint Barthélemy (St Barts), Guadeloupe and Martinique, which are used as a tool to influence the Central American nations. Besides, the islands are also close to the United States and Mexico, which explains Washington’s concerns about France being outside the scope of NATO’s command structures during the Cold War, as this could have led to a non-NATO nuclear power capable of reaching out to the American east coast.

In Saint-Pierre-et-Miquelon (located near Canada), France’s soft and hard power are not as strong as in Guyana, which seems to be a paradox given the colonial history and proximity to the French-speaking Quebec. The main reason why France is nowadays almost absent in North America goes back to December 1803 when Napoleon transferred Louisiana to the United States in return for fifteen million dollars.

Nonetheless, the location of Saint-Pierre-et-Miquelon gives France a direct point of contact with Canada and the Arctic area. Given that Canada is a NATO member state and the small size of the French island (6,000 inhabitants), this—quite unlike the territories in Latin America—does not provide a strategic advantage to the European Union or NATO.

In addition to North America close to the Arctic, France also lays claims to Antarctica through its French Southern and Antarctic Lands, which are home to 200-400 scientists and military personnel. Although the islands have no permanent residents, this is enough for Paris to claim a part of the entire Antarctic continent and conduct research in the region.

With global warming on the rise, the resources of Antarctic have increasingly become of strategic interest; however, for the time being, France is not averse to preserving the environment and studying this particular ecosystem through the Muséum National d’Histoire Naturelle (Alliance Sorbonne University) which advises the scientific community.

An Indian and African country

France has lost most of its colonial empire in Africa but remains active in the continent with Reunion Island and Mayotte. These two territories have an impact on East Africa and Madagascar. While Mayotte is one of France’s poorest territories, it remains a major asset for military operations in Africa, which is why the Comoros continue to claim the island as well as criticize the presence of the French military.

Illegal immigration from Africa is common on Mayotte due to its proximity to the continent, although Paris places little focus on the development of this part of the country, which could, however, become a hub for renewable energy and tourism if investments were made accordingly, of course. In this sense, the lack of effective communication by French agencies—that tend to focus on the Pacific islands (e.g. Bora Bora)—underlines the absence of a national strategy regarding some territories.

French Polynesia in the Pacific

French presence in the Pacific is valuable when it comes to maintaining influence near Australia, New Zealand and Papua New Guinea. Since its withdrawal from Indochina, Paris is no longer an Asian power. While some may argue that French Polynesia can be an opportunity to build up France’s military power in South Asia, the reality is more of a symbolic presence advantageous for tourism.

The French Armed Forces of New Caledonia amount to some 2,000 soldiers, mainly deployed in Koumac, Nandaï, Tontouta, Plum, and Nouméa. The land forces are composed of one regiment of the Troupes de Marine and the Régiment d’infanterie de marine du Pacifique. The naval forces include two P400 class patrol boats, a BATRAL and a Gendarmerie Maritime patrol boat. The Air Force is composed of three Casa transport aircraft, four Puma helicopters and one Fennec helicopter, based in Tontouta.

French Polynesia is now a popular tourist destination, however, its secluded location in the middle of the Pacific, far from any other country, allowed France to carry out nuclear military experiments. In 1962, Algeria (France’s first nuclear test site) became independent, and Moruroa atoll in the Tuamotu archipelago was chosen as the new test site (tests were conducted underground after 1974).

In September 1995, France sparked widespread protests by resuming nuclear testing on Fangataufa atoll after a three-year moratorium. The last test took place on 27 January 1996. On 29 January 1996, the country announced that it had joined the Comprehensive Nuclear Test Ban Treaty and would no longer conduct nuclear experiments in the region.

French Bora Bora (left), a hub for tourism and French Mururoa (right) a place for French nuclear testing until 1996

This overview covers only a few of the 1,300 French islands, and many of them are located close to the mainland, such as in Brittany in Europe, where nuclear submarines are based.

While the collapse of the French Empire has reshaped global geopolitics, overseas territories, much as the French influence in the United Nations and the prolificacy of the French language in many international institutions, are a relic of the colonial past. The remains of the Empire support Paris’s military interests globally and are also a means to further extend the influence of the EU and NATO. As such, the French islands are a direct continuation and reinforcement of Western presence in Latin America, Africa, Antarctica and Oceania in a post-BREXIT Europe.

France’s maritime presence all around the world is even more important for the European Union after 2020, as the United Kingdom shares similarities with France as a global economic, nuclear and military power with its own overseas territories and which is no longer under the sphere of influence of Brussels.