Neo-Kennan Paranoia and the Hope for Russia’s Downfall

For more than two decades I have written about missed opportunities and egregious missteps on the part of America (sometimes accidental, sometimes seemingly deliberate) when it comes to establishing a new relationship dynamic with Russia that could be positive strategic if not necessarily truly friendly. For about that same amount of time I have traveled all across my native country of America, openly inviting and challenging any and all comers to respectfully but critically debate the issues and ideas that hinder this new relationship from emerging. For the most part, those entreaties and invitations have been ignored, refused, or openly derided. Now, admittedly, I would love to think this apparent reluctance to intellectually engage on stage before an interested public was motivated by dread fear of my incredible talent, intelligence, and debating skills. But alas, in all likelihood, the real reason for this lack of engagement is based on the simple fact that too many of the powerful institutions, agencies, and bodies in America are purposely set to maintain a negative relationship with Russia and see that it will not be allowed to move beyond tired standards set back during the worst of the Cold War-era. But, as they say, no worthy fight should ever be abandoned. As such, this article is yet one more attempt on my part to bring light to this purposeful paranoia and expose for it for the fake and flawed intellectualism that it is.

The focus of today’s effort is on a recently published piece in Politico.com by an international security professor working at the National Defense University in Washington, DC. (https://www.politico.com/magazine/story/2019/08/03/russia-separatism-vladimir-putin-227498?cid=apn) Now, for those that do not know the NDU, it is a magnificent and important institution, technically closed to the general public, as it trains and educates those already in the employ of the American Intelligence Community and those deeply engaged within the national security industry writ large. It is a place of deep thought, serious reflection, and total devotion to the security and well-being of the United States. This is why my focus on the recent article, “The Best Way to Deal with Russia: Wait for It to Implode,” is of such importance. If institutions as noted, respected, accomplished, and important as NDU can produce ideas so off-the-mark, then there needs to be some effort from somewhere to challenge those ideas. Otherwise, the national attitude on Russia has no chance but to remain stale and ignorant. 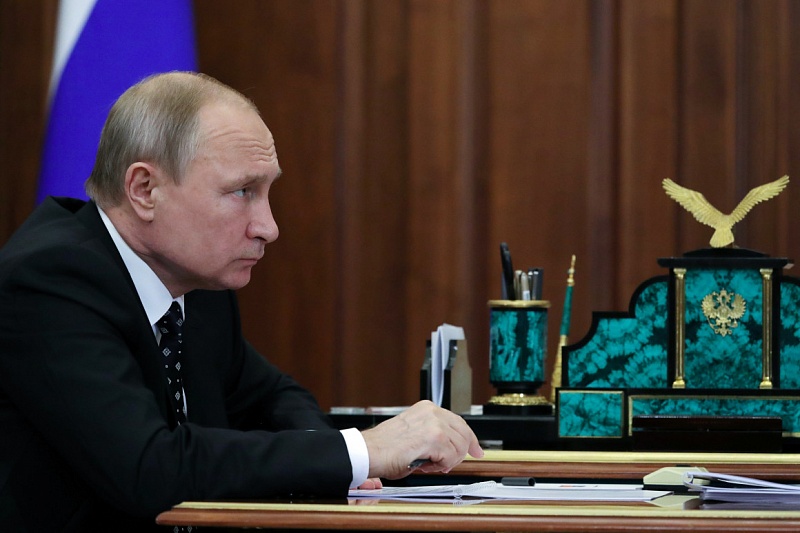 The first point to remark on is the telegraphing of intent in the article. The author, whom I have nothing but respect for in terms of his service and commitment to American security, culled the present article from a forthcoming book which he commands as a ‘neo-Kennanite’ approach to Russia. For those who may not know or have forgotten the importance of George Kennan’s genius, he really can be cited as the inspiration, the godfather, behind American Cold War ideology. Mind, this is not written as a refutation or rejection. Kennan’s words and philosophy (born from the post-WWII 1940s-50s) were indeed needed and necessary in the global circumstance at the time. What matters here, however, is the idea of someone trying to formulate a ‘neo-Kennan’ approach in 2019 which, if it stays logically consistent, is ideologically committed to justifying and maintaining a thought process at any cost which isolates Russia as a rival and enemy, just as Kennan did with the Soviet Union nearly 70 years earlier.

The problem, of course, for those who wish to work on new platforms and create new relationship foundations for Russia and America, is that there is nothing new about ‘neo-Kennanism.’ It is, de facto, a testimony to and application of Cold War thinking to modern Russia. It is a reduction of modern Russia so as to see it as nothing but a mimic of the old Soviet Union eternally. Indeed, it is a predetermined engineering of the narrative so that Russia has no other course, is able to achieve no other path, in its relations with America. As such, it is not a reflection of modern reality at all but a fantastical framing so as to make sure modernity does nothing but mirror the past. This tired approach must be discarded as much for its reckless dangerousness as for its lethargic inaccuracy.

In the very first paragraph of the article, the author decries what a giant threat Russia represents for its targeted interference in the 2016 American Presidential election and its alleged desire to continue such interference as America heads into 2020. While there is no doubt such attempts are indeed illegal under American law, the author does not mention the fact that every piece of evidence to date indicates Russian attempts to actually alter or interfere with real election technology proved unsuccessful. As a result, the real concentrated effort on the part of Russia was an expansive social media disinformation campaign, largely contained within Twitter, Instagram, and Facebook. Breakdowns of that disinformation campaign reveal almost laughably biased attempts to sway the minds of the American public, both left and right. If one argues that campaign was successful, then isn’t at least some, if not most, of the blame firmly resting in the gullible and intellectually lazy minds of American citizens, who did not bother to vet, check, or investigate the things they came across on social media?

Perhaps more bothersome, the author quotes an intelligence professional who admits that the American Intelligence Community is now, in response, doing far more than it has ever done before to Russian civil society, including stepped-up attacks on Russia’s power grid. The problem with this, obviously, is that the author is calling Russian social media attacks as grounds for maintaining Russia as a ‘deadly’ threat but openly ignores America’s own response, which, given it is an attempted incursion on critical Russian national infrastructure, is arguably far more threatening and far more dangerous. Finally, in this infantile tit-for-tat environment, why is anyone in America even feigning shock that the Russians would continue its own campaigns? The current dilemma between the two countries is far less Cold War and far more children on the school ground. The failure to openly and self-critically assess these kinds of positions (and whether they truly mark dangerous threats) makes American national strategy on Russia not only flawed: it drives it into dead-end corners of its own making.

The author also makes somewhat grandiose but utterly off-base assessments of the state of current Russian power, claiming it is far less stable today than the end of the Romanov dynasty and highlights supposed ethnic republican strife that could challenge the very territorial integrity of the Russian Federation as a whole. Again, with no disrespect to the author, these arguments are simply…WRONG. It is either a misreading of history (ie, not understanding just how flagrantly unstable and chaotic the end of the Romanov dynasty was) or an emotionally inaccurate and hyperbolic characterization of present-day Russia (ie, not realizing just how little ethnic unity there is between the so-called Finno-Ugric nationalities largely existing throughout Southern Russia). The citing of some relatively localized and entirely powerless youth/citizen groups in Bashkortastan and Tatarstan, respectively, is hardly evidence to make an argument as wild as millions of citizens are simply waiting for Putin to no longer be President so as to seek out their own state independence. This is simply false. As someone who has done research on the ground in both Ufa and Kazan, the capital cities of said republics, these leaps of illogic are more a reflection of American wishful thinking for the disintegration of Russia than real scholarly research built on painstakingly collected empirical data. This also hints at another egregious misconception often professed by American Russian experts: that the current Russian state is nothing but a megalomaniacal dictatorship revolving entirely around the whims of Putin’s personality. Again, this is completely inaccurate: a hyper-presidential system not entirely enamored with the American system of democracy, which Russia definitely is, is not a synonym for what Stalin created. It simply isn’t. Writing articles where you pretend that it is doesn’t make it so.

This position is only more erroneously pounded upon with statements that are both flat wrong and perhaps purposely taken out of context. Vyacheslav Volodin is incorrectly named as Putin’s Chief of Staff, a position he departed from in 2016 in order to run successfully for the Duma, where he now sits as its Speaker. In addition, Volodin’s 2014 quote of ‘there is no Russia without Putin’ was purposely misappropriated in the article. It was used as evidence for how dictatorial Russia had become. In reality, that quote came as Volodin was head of Putin’s presidential re-election campaign and was said as a reference to how none of Russia’s current success and progress could have been achieved without the efforts of Putin’s previous terms as President. It was literally standard campaign-PR bravado that we see already nearly every day in America as it gears up for 2020. Reframing it to push as false evidence of a modern-day Stalinist Russia is extremely flagrant. Worthy of a Russian disinformation campaign, in fact.

Finally, the author states that the fact that modern Russia no longer has a strong unifying ideology like it did back in the Soviet Union Communist hey-day means it is primed for divisional strife and ultimate disintegration. Most of what I have written above already proves how that is yet another example of hyperbolic political posturing/propagandizing. But I would also be remiss to not point out how the very argument itself is in contradiction with the other ‘pieces of evidence’ used in the article to justify keeping Russia the dread enemy of America. Russia has either remade itself into a modern-day equivalent of Stalinist Soviet dictatorship OR it is a mere shadow pathetic shell of itself barely keeping all of its disgruntled peoples under one banner, desperately afraid of splitting into a dozen little pieces. It cannot be both at the same time. This article, without realizing it, argues that very thing.

So, for the so-called neo-Kennanites, I have bad news: Russia is not ready to disintegrate and even Putin’s exit from the political stage will not trigger a massive ethnic upheaval. Unfortunately, for the so-called neo-Kennanites, I have even worse news: the only group that likely needs to disintegrate, not only because it mishandles contemporary Russian analysis but pushes a political agenda that actually weakens, not strengthens, American national security, is the neo-Kennanite group itself.

OTHER RECORDS
Walk the Line: Russia as the New Chair of the UN Security Council
Matthew Crosston
The Donkey and the Elephant: American Presidential Politics, Russia, and 'None of the Above'
Matthew Crosston
American Jihadi: Why Westerners Fight with the Islamic State
Matthew Crosston
Tags
Russia, USA, Election, Security