By design, the game is implemented in two stages. At stage 1, Ukraine and Russia choose levels of financial transfers and military involvement not knowing each other’s choice. At stage 2, Crimean voters observe the levels chosen and opt for the preferred country. Does it sound familiar? Hopefully so, because the game could be regarded as a modified all-pay auction in which the good to be auctioned is Crimea and Sevastopol, the auctioneer are Crimean voters, and the bidders are Russia and Ukraine. They ‘secretly’ submit their bids in the two-dimensional space and whoever ‘bade’ more armed forces, or when no-one used the military, whoever offered more financial aid/transfers, gets the good. Both bidders should pay their bids regardless of the auction’s outcome because their approval rates/chances of re-election depend on how much aid they promised and how much army got involved independent of whether this effort was successful or not.

In such mechanisms auctioneers are not modeled as separate players because their best response at stage 2 is determined by strategies chosen by bidders at stage 1. So, we can facilitate our search for equilibria by inserting the best response of Crimean voters into utility functions of the other players. In fact, I have already done in Part I by introducing the so-called ‘victory function’ which basically nested this best response. Thus, it makes sense to exclude the stage-2 player from the game and treat their binary decision as a part of the mechanism. Now the interesting question is how much Russia and Ukraine will bid for Crimea. Would they stick with financial aid or would they rather launch an offensive? Or would they risk it all and do both? It’s time to make your guess and see if it will prove correct.

Note: if you have not read Part I and do not have time to go through math, you might want to scroll down to Discussion.

Recall that the Nash equilibrium is a bundle of strategies where every agent plays their best response, so there is no incentive to deviate. Hence, a way to find equilibrium is to start from eliminating strictly dominated strategies as by definition they can not be best responses. To follow this procedure, I shall first draw strategy sets of both players in the Cartesian plane:

Just by looking at Figures 1 and 2 and by looking at utility functions from Part I, we can already exclude a lot of strategies from the list of candidates. Formally, my first claim goes as follows:

Proposition 1: Let sg = (fg, mg) by a strategy by state g. Then, any strategy sg where mg> 0 and fg> 0 is strictly dominated by strategy sg’ where mg’ = mg and fg’ = 0. Verbally, once a state chooses to involve militarily, it is optimal not to spend any resources on financial aid.

Proof: Consider Russia’s utility function when it uses armed forces (mg > 0). Note that the victory function V(·) no longer depends on the referendum outcome and thus on financial transfers either,

Differentiating with respect to FR gives

∂c(FR)/∂FR> 0 implies ∂UR / ∂FR< 0, so it is optimal to choose FR*= 0. In layman's terms, once the conflict turns hostile, pouring money will not influence the region’s fate, but it will decrease approval rates as taxpayers become poorer. Therefore, it’s best not to spend any funds at all and stick to the military response only. Ukraine’s case is exactly the same, so (2) holds for both countries. Most importantly, the derivative is negative for any strategy of the opponent, so it is always inferior to choose positive levels of both inputs. QED

Consequently, in equilibrium governments only choose either budget transfers sg = (fg, 0) or military involvement sg = (0, mg) which turns the set of candidates for equilibria into a real line as depicted in Figure 3,

The second refinement of strategies arises from the fact that it is not optimal for Russia to choose levels of financial aid or military intervention which significantly exceed the limits of Ukraine (meaning there is not going to be a nuclear war and Crimea will not be offered extraordinary many funds for joining Russia).

Proof: let us see that it is suboptimal to waste finances above Ukraine’s limit LFU. First, consider a case when Ukraine has chosen to ‘buy’ voters, sU = (fU, 0). Then utility of Russia’s president from spending at least (LFU + ε, 0) is

As the derivative with respect to transfers is the same as in (2), further spending is unnecessary and harmful for approval ratings, fR= LFU + ε is indeed better than fR’> LFU + ε. Now suppose that Ukraine has chosen to send troops instead, then playing sR = (fR, 0) yields

In this case, as (4) shows, the less spending, the better because the territory is ‘lost’ and pouring money is wasteful. So, fR proves superior to fR’, again. Let us turn to the case when Russia intervenes militarily. If Ukraine is peaceful,

By differentiating with respect to MR, we obtain

By assumption, ∂a(MR)/∂MR is negative, which is why ∂UR / ∂MR < 0. For this reason, Russia should minimize its intervention to ε, and it is thus true that mR’ yields a higher utility than mR. Finally, if Ukraine retaliates at any level within its capacity, launching an offensive at the level of at least (0,LMU + ε) promises for Russia

Intensifying military action by one unit increases utility by

Depending on parameters, the derivative could take any sign when Russia decreases its military involvement. However, it is evident that moving from LMU  to LMR causes the utility function to decrease since sanctions become harsher and public satisfaction drops as the response gets less symmetric, or ‘adequate’. By concluding that mR’ is preferred to mR in this setting, too, we complete the proof of Proposition 2. QED

This finding provides us with justification to further reduce the set of feasible best responses, which is now constrained by Ukraine’s limits in both dimensions (see Figure 4).

To ensure the existence of at least one pure-strategy Nash equilibrium, I shall make an additional assumption about the game structure. Namely, by engaging militarily at level (0, LMU + ε) as a defender, Russia enjoys a non-negative utility. To see why it will be important, let us first look at the best response graph. It illustrates what is best for a player given the other player’s strategy. Consequently, if we are able to find a point where two best response curves cross, we have found Nash equilibrium. Figure 5 illustrates such a graph with some assumptions about sanctions, utility from the disputed territory and costs of inputs which I will leave implicit. 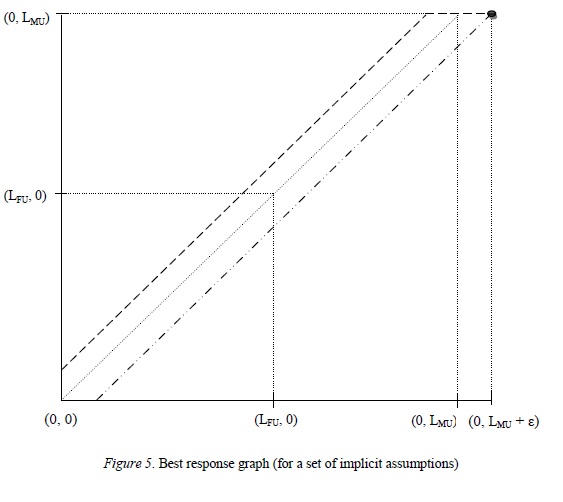 The dashed curve above the 45-degree line is Ukraine’s best response and the one below is Russia’s. Such behavior of curves might remind you of market competition a-la Bertrand where firms have an incentive to push the price down by an infinitesimal in order to win all demand on the market which results in the lowest acceptable price and zero profits for both firms. Likewise, it is beneficial for each state to make a ‘bid’ that is just a bit higher than that of the competitors and grab the territory. This process continues until Ukraine’s military limit is reached. Russia’s best response to sU = (0, LMU) is to choose sR = (0, LMU + ε) because it allows to seize Crimea, provided that sanctions are sufficiently low. In turn, when Russia plays (0, LMU + ε), Ukraine’s optimization problem is

By construction, it would be optimal to respond with MUFB = LMU + ε, but this option is not feasible. The second-best option is to go with MUSB = LMU, which is thus Ukraine’s best response. Consequently, the pair of strategies sR = (0, LMU + ε), sU = (0, LMU) is a Nash-equilibrium, illustrated by the black dot at Figure 5, the only crossing of two best response curves. Below I give a short discussion of this equilibrium, its low social value and what we could do to avoid it. One word of caution to conclude the section: for other settings the game has different equilibria or only a mixed equilibrium. A thorough discussion of all solutions is well beyond the scope of this paper, but you are of course invited to contribute to my research.

The model produces a clear yet sad prediction, namely, if the territory is sufficiently valuable, both states will choose to invade militarily although one party to the conflict is aware of the fact it will lose. Let us summarize in two points why this happens:

Also note that despite the noise streaming from propaganda on both sides, neither equilibrium strategy is irrational or ‘schizophrenic’ since rationality relates to the ability to maximize one’s own interest. That is, political leaders are doing their best to maximize rents and chances for re-election. If politicians sought to maximize social welfare instead, this pair of strategies would not be played in equilibrium because it would be best for Ukraine to choose the ‘shut down’ option, meaning that it does nothing. However, as long as governments are run by people rather than impartial and benevolent machines, we will witness many wasteful outcomes like this one.

To check whether the model is consistent with evidence, see how well your knowledge of the situation fits its predictions that are as follows. Russia deploys as many soldiers as is just sufficient to gain control over the republic. In turn, Ukraine’s government loses Crimea and orders its troops deployed there to stay loyal and not give up. [Obviously, this interaction has high risks of turning violent even after Crimea joins Russia legally]. Furthermore, neither government officially promises any extra transfers to the Crimean people. And finally, the local Russian population votes to join Russia due to their cultural closeness whereas Ukrainians vote to stay in Ukraine (culturally closer to Ukraine) or abstain (no influence on the outcome) and Tatars abstain (no cultural closeness, and no influence on the outcome). That is, the turnout is predicted to be at around 75%, of which 80% vote for independence.

In the last paragraph I would like to address the issue of how to avoid tragedic outcomes. On the one hand, harsher sanctions make it more costly to invade and at a sufficiently high level thereof Russia would just shut its effort down. On the other hand, a higher upper bound of Ukraine’s military capacity would also boost Russia’s costs of competition to the level where it could be rational to abstain from any involvement in the crisis. It should be reminded, however, that neither approach guarantees that new equilibrium will have nicer properties than the old one. In fact, for certain parameters there could be no equilibrium in pure strategies at all, which means that our capacity to make testable predictions would almost disappear. But let me conclude by saying that despite some difficulties with interpretion of the model, figuring out how to implement these methods in future in order to avoid new conflicts over debated territories should become the focus of applied research in international politics at least in the short-term period.

P.S. I have completed this model in just three days, and to me its predictive power is remarkable. The reason is that incentives arising from self-interest of politicians understood as pursiut of offices and money are generally a much useful explanatory framework than vague holistic geopolitical approaches. Just imagine what we can achieve once a bit more time and resources are allocated to rigorous and falsifiable science that I am advocating in my blog.

OTHER RECORDS
Can weapons end the war?
Igor Legkiy
A game approach to the Crimean crisis. Part I: Game Description
Igor Legkiy
Can protests lead to a better choice of government than elections with fraud?
Igor Legkiy
Tags
Game theory, Mechanism design