To Have and to Have Not?

Economic models that favour “temporary access to goods and services over ownership” have been called different things by different people. Depending on the aspects that need to be highlighted, it’s been dubbed access economy, sharing economy, collaborative consumption, gig economy, trust economy or app-enabled capitalism and “crowd-based capitalism”.

Yet, the term “sharing economy” inevitably calls for historic comparisons with Soviet lifestyles. It is for a reason that the Chief Analyst of the Russian Association for Electronic Communications (RAEC) Karen Kazaryan stated in one of his interviews that ““We lived in a ‘sharing economy’ for so long that now we desperately want to be owners”. (https://www.calvertjournal.com/articles/show/3303/sharing-economy-peer-to-peer-russia) Since this buzzworthy quote was backed up by some recognisable examples, it has essentially become a catch phrase. 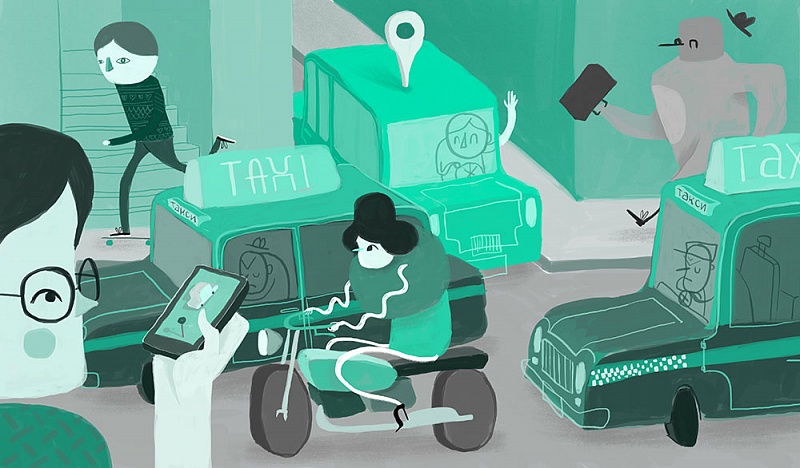 Axiom with no proof necessary?

Try browsing through various business presentations and you will inescapably come across a “we’ve been there” slide these days. It feels somewhat obligatory for presenters to allege that post-Soviets might not necessarily be about this sharing economy craze. Let’s not deny that there was certain truth in Kazaryan’s words. At some point in history, a car really wasn’t just a wealth symbol for Soviets. In the era of consumer goods deficits, it also symbolised connections (as not everyone, who had money to purchase a car could easily do so). In fact, some post-Soviets still connect the brand of the car that they are driving to their social status.

Yet, like so many other catch phrases, it eventually got so far removed from the original context and intent of its author, that now it barely reflects reality. For once, according to the RAEC’s own fresh data (https://raec.ru/upload/files/sharing-economy2018.pdf), the volume of transactions within Russia’s sharing economy platforms totalled around some 511 billion Rubbles in 2018 alone. It corresponds to 30% year-on-year grown compared to 2017 figures. Furthermore, thanks to its carsharing fleet of 10,000 – 15,000 shared vehicles, Moscow is becoming the largest carsharing city in Europe. In fact, according to more optimistic estimates, Moscow it’s well on it’s way to becoming the largest carsharing city in the world.

Was it logical to expect that after years upon years of living in a non-digital version of the collaborative consumption, people wouldn’t exactly “queue up” to share their cars, homes and other priced possessions with strangers? Yes, but numbers tell us a different story. According to the Regional Public Centre for Internet Technologies (ROCIT, 2017), 81% of RuNet users are “open to the idea of renting or exchanging goods and services with other peers via online platforms without third-party intermediaries”. 78% of RuNet users in the same sample claimed “they were open to the idea of offering products or services in exchange for gains”. (https://rocit.ru/uploads/0aefe83a9e6d70e06f938c7492996e59a036b53c.pdf?t=1501493510).

At the same time, there are some reasons to believe that the Soviet legacy is exactly what helps sharing economy models thrive in the region. For example, “BlaBlaCar” founder Nicolas Brusson thinks there might be a link between company’s remarkable success in the region and Soviet experience of collaborative consumption. BlaBlaCar entered Russian market back in 2014, the same year that Kazaryan’s quote started getting traction. By December of that year, over 1 mln of Runet users have registered for the service, making Russia one of the fastest growing regions for the ridesharing app. Soon enough, it was Russian residents, who set an unprecedented record for the company, when some 3,000 users shared rides from Moscow to Saint-Petersburg within one sing weekend. (For comparison, that number corresponds to 55 full train carriages) (https://www.forbes.ru/tekhnologii/tekhnika-i-biznes/329351-ne-znayu-pochemu-v-rossii-blablacar-stal-takim-populyarnym-mozh).

There’s a clear discrepancy between theoretical expectations regarding adoption of sharing economy in the region on one hand and the actual facts and figures on the other. It was exactly this gap between expectations and reality that motivated me to write a study entitled “Been There, Done That? Social and Environmental Implications of Shared-Property Models in the post-Soviet Context”1. While research indicates that the Soviet legacy does affect the adoption of collaborative consumption, the nature of this effect leaves a lot more to be addressed.

To Each Their Own

When it comes to proliferation of collaborative consumption, the aforementioned philosophy finds its own unique reflection in the former Soviet region, but not in a way you might assume. As strange as it may seem, those were mostly Western consumers, who (at least, initially) hoped that the sharing economy might provide a viable alternative to the cut-throat model capitalism that Milton Friedman used to viciously believe in (http://umich.edu/~thecore/doc/Friedman.pdf). By the time proverbial Ubers and AirBnBs of the world reached Russia’s frontiers, they no longer resembled sporadically set up citizen initiatives. On the contrary, these start-ups were so exceptionally successful by then that the venture capitalist Aileen Lee would coin the term “unicorns” to refer (https://www.inc.com/minda-zetlin/unicorn-1-billion-valuation-vc-venture-capital-aileen-lee-cowboy-ventures-elite-universities.html) to such unprecedented growth.

Firstly, homo post-Sovieticus was never really inclined to see these businesses as mavericks destined to change capitalism. As far as local consumers were concerned, these mega-companies resembled a rather stereotypical vision of American capitalism that was immortalised by Gordon Gekko, when he famously proclaimed that the “greed was good!” for the economy. For example, a vacancy of the regional manager for Uber that was posted on some recruitment page, has prompted one of the Kazakhstani outlets to speculate whether the company is entering the local market. The piece generated some excitement about the corporate opportunities within the company without even mentioning what would otherwise be obvious - opportunities it might have signified to gig economy workers (gypsy cab drivers).

It is worth noting, that more informal, sporadically set up, citizen-led sharing economy initiatives, which resemble alternative economic and even somewhat political movements, also exist in the region. Those initiatives in no way remind of traditional corporate structures. Most of the time, those initiatives start out as “VK.” / social media groups. People use them to exchange goods, offer unwanted items to those who might need them, organise collective purchases at a discounted price and simply find like-minded individuals, who wish to change their consumption patterns with and consume differently. However, the scale of these initiatives can in no way be compared to the success of the corporate players that mimic sharing economy models in the region. For instance, as of June 20th, 2019 Saint-Petersburg-based group “StroiSharing. Donating building and Construction Materials” has 22 000 members (https://vk.com/stroisharing), while “Fir-trees, Sticks, Wood Shavings. Collection and Recycling of Pines” has just over 2 000 members (https://vk.com/elki_palki_bizoni). Meanwhile, it wouldn’t be a stretch to assume that the vast majority of urban dwellers in post-Soviet cities are at the very least familiar with the brand of “Yandex.taxi” (if not already using their ridesharing service).

Secondly, this lack of ideological component in public perception comes with absence of ideological incentives for participation in the sharing economy. It separates Russia’s contemporary peer-to-peer economy from its Soviet counterpart. Furthermore, it is also what post-Soviet peers from western peers, who might be ideologically motivated to choose alternative consumption styles. Going back to ROCIT’s data, 83% of RuNet users list the “opportunity to save money while using one-off goods” as a benefit of collaborative consumption. Seventy percent of RuNet users also emphasize the ability “to temporarily access goods that they would not otherwise afford at the moment.” Sixty-two percent focus on maintenance costs that collaborative consumption helps them avoid. Other perceived benefits include “increased mobility” (48%) and “time efficiency” (36%). However, as little as 3% of Runet users highlight other motivations (https://rocit.ru/uploads/0aefe83a9e6d70e06f938c7492996e59a036b53c.pdf?t=1501493510) for partaking in P2P economy. In other words, post-Soviets are primarily economically rather than ideologically motivated to take part in the access economy.

Thirdly, one can never talk about economic motivations without looking at self-employed population within the gig economy context. Yet, post-Soviets also have their own distinct take on the matter. From the get-go, Western experts were concerned that the lack of social security might result in emergence of precarious class of workers. Meanwhile, precariat formation is nothing new for the post-Soviet region. It has been spreading as a class, since the early 1990s, when many people were forced out of formal employment. Due to this peculiar history, digitalising those gig economy workers is mostly seen as an opportunity to get out of “grey” area rather than a threat. Thus, the head of Moscow’s Information Technology Department Artem Ermolayev threw his weight behind this viewpoint at the Saint-Petersburg International Economic Forum (SPIEF-2018 ) when he explained (https://topdialog.ru/2018/05/26/oni-mogli-by-delat-eto-vmeste-eksperty-pmef-ob-ekonomike-sovmestnogo-potrebleniya/): “This signifies transition from the grey areas to “white” ones. This is something sharing economy peers are interested in themselves, because right now many services remain in the grey zone. Look at those people who are tutoring students. On one hand, they are earning, which is a good thing. Yet they can’t get a loan from banks, because they can’t prove they have income.… That’s why collaborative consumption is certainly a good trend in terms of development.”

We Were Never Really Here

A rather familiar discourse about having lived the original sharing economy is more of a déjà vu rather than a real memory. As much as one might experience the sense of familiarity with these models, it doesn’t serve anyone to forget that we are exploring something new.

That being said, there are far more similarities between these economic models than the nature of this blog would allow me to break down. Yet, as the experience of the last few years has clearly indicated, it would neither be particularly reliable nor useful for us to overly rely on historic evidence, when analysing the patterns of sharing economy adoption in the region.

The sharing economy has been doing quite well in Russia and its immediate neighbourhood. It happens both because as well as despite the Soviet legacy of collaborative consumption. Instead of using Soviet legacy to predict the exact trajectory of sharing economy adoption in the region, we should use it as a reminder of just how distinctly different the approach to sharing economy might become due to that unique legacy.

By decoupling our analysis of the situation from overzealous linking to neatly phrased quotes and interesting historic precedents, we could only enable ourselves to evaluate local development of the sharing economy more accurately.

2 Sundararajan, A. (2016), “The sharing economy: the end of employment and the rise of crowd-based capitalism,” MIT Press