The Downing of MH17 – A Perspecitve of Intrigue or the “HALO Effect”?

As a Malaysian and global citizen, when I watched TV on the morning after that MH17 crashed, I was shocked, horrified and deeply upset - so many innocent people dead, and two Malaysian Airlines planes gone in 4 month. Why was this happening? Malaysian Airlines had a very good track-record for safety, reliability and good service.

Then I heard it was shot down, I was furious. Who could have done this? I watched CNN International and BBC World News and they were the first to blame Russian Separatist and the Russian Federation. Bloomberg News, Sky TV, Australian News, Singaporean News all followed with the exact same broadcast. I could not believe that Russia would have done such a thing neither, would Russia have helped the Separatist to do such a horrendous act of MURDER. I watched Russia Today (RT) and CCTV International (PRC) for a different perspective, on the truth. 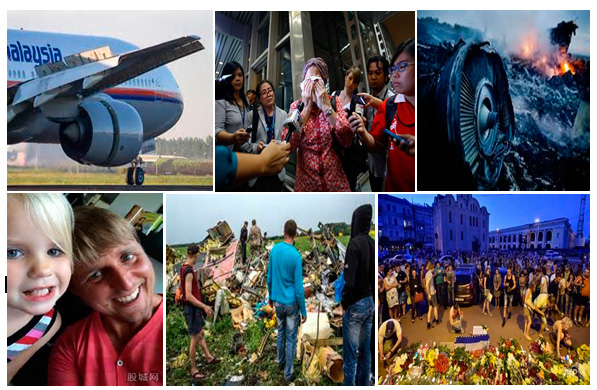 I was watching the news broadcasts on the 18th morning at 1.30am. My 82 year old mother woke-up at this time after hearing the TV. She became extremely distraught after watching the news. We had a discussion and she said “Eugene – they, the USA and ISRAEL, did this to distract the World from the Bombing and Invasion of GAZA, Palestine by the Regime of Israel. She said, you were abroad and just returned last night, you did not see that our Prime Minister Najib of Malaysia, announced again full support for a FREE PALESTINE on TV last night. This has always been the Policy of Malaysia.

In my heart, I felt it was Ukraine doing this on the suggestion of the USA. After all the USA has 400 CIA agents stationed in Kiev “advising” on “tactical” matters. Furthermore, God knows how many MOSSAD agents of the Regime of Israel are also there – seeing that many Israeli Citizens are dual citizens – Israel and USA. The other reasons are that the new Regime of UKRAINE works closely with USA and the Regime of Israel. All have a track-record of shooting down Civilian Planes. In 2001 Ukraine “by Mistake” shot down a Russian Civil Airline killing 78 People – women and children included. The United States Navy guided missile cruiser USS Vincennes on 3rd July 1988 shot-down an Iran Air 655 Killing all 290 on board, including 66 children and 16 crew. Israel shot down a Libyan Arab Airlines Flight 114 a regularly scheduled flight from Tripoli to Cairo via Benghazi in 1973, killing all but 6 people.

Might they done this to MH17 in an attempt to instigate military responses or to distract the world from the atrocities they are committing at home or aboard – invasions, toppling of governments, or planned actions to steal natural resources from countries (as they have done in IRAQ, Libya, Sudan, Palestine)?

But CNN and BBC and the gang of “Independent Media Muppets”, kept on making references to USSR’s shooting down of the South Korean Airline on 1st September 1983. Korean Air Lines KL007 a scheduled flight from New York City to Seoul via Anchorage by a Soviet Su-15 interceptor when it “strayed into USSR territories”. The fact that the USA and other nations had shot down civilian planes themselves was “missing” in any of their broadcasts. Why?

It made sense to me. Why only the Malaysian Plane MH17 was hit? Singapore Airlines was 25 minutes behind Malaysian airlines, but Singapore is a great supporter of the USA and Israel – even their Army is trained by Israel. And Air India was 90 seconds behind MH17.

Then my memory of MH370 came into play. This was a Malaysian Airlines flight to Beijing, the People’s Republic of China, a friendly nation to Malaysia but nemeses to USA. That plane “disappeared”. This plane was purported to be carrying some cargo – 4 tons of fruit “Mangosteens” which were not even in season in Malaysia - and the rumour in Malaysia is that “a cloaking device from US Military in Afghanistan was actually the 4 tons of cargo to be delivered to Taiwan on route to Beijing and was going to be intercepted by PRC. The plane MH370 was also Boeing 777 –fly-by-wire technology - was flown as a drone to Diego Garcia to retrieve this cargo bound under the guidance of the destroyer USS Pinckney based in the Gulf of Siam at that time.”

While writing this piece today, one of my consultants after discussing all these facts and scenarios –suggest the “Halo Effect”. I pondered and wonder – was this a “HALO” effect, known in accounting as 2+2 = more than four? The USA can blame RUSSIA in Europe and Internationally as a tyrant nation, and allow the Regime of Israel, a puppet of USA to conduct GENOCIED in Palestine, while helping our Malaysian Opposition, who is supported by the USA to topple our Barisan Nasional Government which is not so friendly with the USA. Furthermore, Malaysia will hold the Chairmanship of ASEAN+3 in 2015, a very important and strategic position in the South East and East Asian Region. With a toppled government and another puppet government installed, life would be much easier for some nations. Much of this has recently also been suggested by our former Prime Minister Tun Dr.Mahathir Mohammad in his website. So might this be the Truth or mere conjucture?

We have once again handed over some jurisdiction to the western powers for the investigation of MH17, just like MH370, not an international committee. We will all wait and see what happens? And Who is found guilty, if ever?