Above The Fray… Brasilia and Washington Seek Broader Cooperation

The atmosphere in the press room at Itamaraty Palace in Brasilia was agitated Tuesday morning.  Journalists and camera crews were scurrying about, waiting for Foreign Minister Antonio Patriota and U.S. Secretary of State John Kerry to arrive. I was there, attending the event..

The diplomats were holding a joint news conference on the status of bi-lateral relations and the thorny issue of recent leaks over data collection programs conducted by the United States that have drawn the ire of citizens and governments everywhere.

Some correspondents were preparing tough questions to ask Kerry about the “spying.”  After all, O Globo, Brazil’s largest media organization, did use maverick American journalist Glenn Greenwald to stir up nationalist sentiment over what was not direct “spying” or “casing” of individuals, but simply raw data collection that could be used for analysis to counter extremist activities that Kremlin leadership also view as threats.

Is Universal Freedom The Freedom To Betray Your Country?

Watching Glenn Greenwald on TV in Brazil and in his testimony to the Congress of the United States, and reading his articles in The Guardian in the name of civil liberties, it is difficult to rule out that he is intent on fomenting hatred of his homeland to others. In doing so, however, he lacks the candor of former U.S. Attorney General Ramsey Clark, the son of a former U.S. Supreme Court Justice, who defended the rights of the revolutionary government in Iran after the government of the United States froze their assets.

Toward the end of the Cold War Ronald Reagan directly called the Soviet Union “the evil empire” when he was trying to raise funds for the controversial Strategic Defense Initiative known as “Star Wars.”  But many observers thought he was being tongue-in-cheek, funny. Greenwald may be passionate but he lacks a sense of humor and a sense of compassion for his fellow man.

Now as Foreign Minister Patriota prepares to escalate the U.S. surveillance issue with the Oraganization of American States (OAS) he, like Glenn Greenwald, prefers to sidestep the issue that Brazil spies on its own, and sometimes others too.

Brazil and other major nation states all conduct security activities under the veil of secrecy so that the projects are effective. It is public knowledge that the Federal Police routinely tap millions of phones in connection with their operations. The procedure is so prevalent among Brazil’s power elite that the popular Sao Paulo daily Folha refers to the surveillance as a sense of place, grampolandia  (the land of small alligator clips traditionally used to tap lines at telephone switching stations).

Other magazines publish grampolandia cartoons and have even discussed former president Lula and some of his inner circle in connection with the grampolandia surveillance.

When riots broke out throughout Brazil in June the director of ABIN, Brazil’s intelligence agency, issued a public statement that his nation cooperates with 82 other governments in the collection and analysis of information dealing with security issues, including the 2014 FIFA Brazil World Cup and the 2016 Rio Summer Olympic Games, and other areas of interest. Nobody of import in the media or Brazil’s raucous Congress asked for details of these institutional security arrangements. They are too busy energizing their political base pointing the finger at Uncle Sam.

What is different about the revelations of Edward Snowden, the WikiLeaks-guided former contract employee of Booz-Allen,  is that Brazil, while having a close strategic relationship with the United States, is also put in a the complicated position of being a party to both sides.

While maintaining a strategic relationship with Washington, the government of president Dilma Rousseff, as the regional power, needs to show solidarity with its Latin American neighbors. Argentina, Cuba, Ecuador and Venezuela are not politically aligned with Washington and seek to exploit and collateralize the surveillance for political gain.

Then too, Brazil would find it difficult to deny knowledge of the fact that China, its #1 trading partner, exploits economic intelligence gathered in cooperation with Cuba at an electronic intelligence station in Bejucal, outside Havana.

A mentioned by several media sources WikiLeaks does not seem to care if it puts people’s lives in danger or damages their reputations. The organization has endangered the lives of Americans and Israelis, prompting the U.S. State Department to send a warning letter to Julian Assange in 2010.

The organization has created controversy in Brazil, with one of Brazil’s most reputable TV news personalities, William Waack being accused of being a propaganda asset of the United States.

Ironically, Julian Assange is on the record saying he supports American libertarian economics. And in the past, the pro-libertarian Pirate Party of Sweden has hosted his servers. 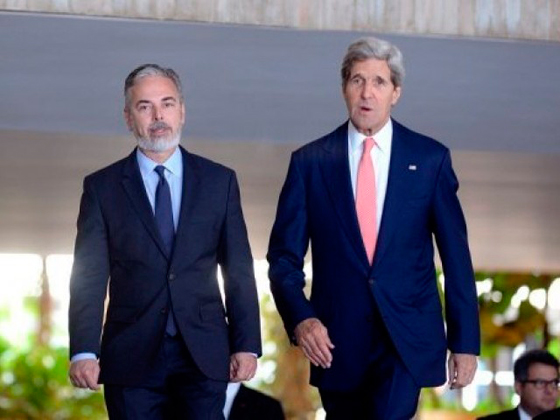 A Relationship For The Future In A Dangerous World

Secretary of State Kerry, who has compared bumps in relations with Russia to “collisions in a hockey game,” did not use a metaphor to assuage the concerns of the press corps at Itamaraty.

Looking almost presidential, Kerry stood before the reporters, responding to the tough questions with aplomb.

One wonders how former U.S. Secretary of State Hillary Clinton with her sunglasses, smart phone and reset button would have handled the situation. Since she is preparing to run for the presidency she may need to develop a script about what, if anything, she knew about the highly classified program before the media creates their own.

As the camers clicked and the strobelights flashed Kerry reminded everyone that we live in a dangerous world. He noted that the data collection programs do help provide security for Brazilians as well as for the people of the United States other nations.

On balance, his preference for “quiet diplomacy” put the data collection and Edward Snowden into the context of a “side issue.”  As a tool of diplomacy it  is as appropriate as Foreign Minister Patriota’s effort to preserve the sovereignty of nation states that are impacted by it.

While the media amp up the data collection story the United States continues to be Brazil’s #1 source of direct foreign investment. With Brazil leading a UN “peacekeeping” force in the Congo that now features a combat mission component Washington and Brasilia are working together to strengthen cooperation to support that mission and make it succeed. And the Obama and Dilma governments are implementing education programs that will enable Brazilian students to attend universities in the United States in an effort to improve Brazil’s skills base and promote social inclusion.

All of this was discussed at the Patriota-Kerry media event in Brasilia but was ignored or downplayed by the most of the news cycle coverage.

It’s time for global media, NGOs and foundations who fund those who engage in sponsored conversational media coverage to get a positive vision on where the Brazil-United States relationship will be a generation from now. Since Russia will be part of the mix, it would help Kremlin and academic Latin Americanists to develop that mindset too.