The Abraham Accord, Iran, and The Geopolitics of the Persian Gulf

The volatile geopolitics of the Middle East and North Africa and its unstable balance of power in the aftermath of the 2011 uprisings in the Arab world and the 2015 Iran Nuclear Deal have correspondingly influenced the political relations between Israel and the Arab states around the Persian Gulf to become strategically stronger and diplomatically denser. Serving a political agenda, the Abraham Accords were signed to contain Iran’s influence in the region by introducing Israeli counter influences. 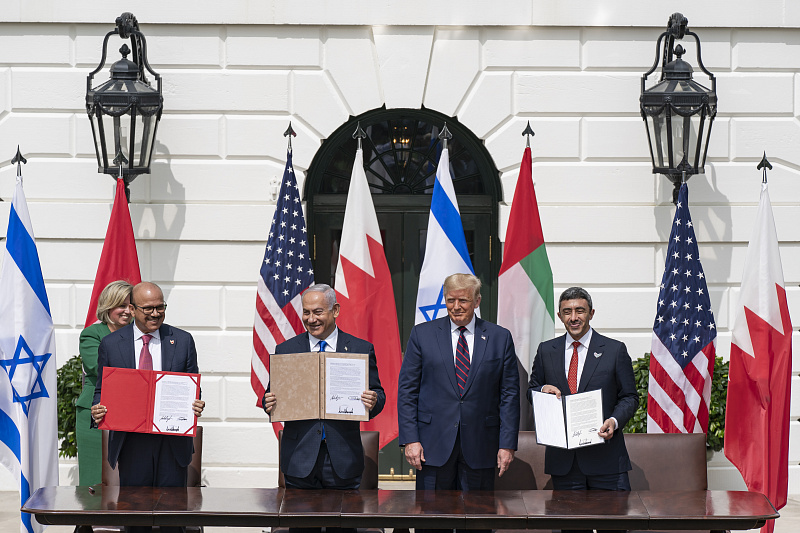 Subsequently, as Trump’s era ended and Saudi-Israeli relations with the US loosened, the Abraham Accords sees itself in danger by the revitalization of the JCPOA in Vienna. However, the renegotiations of the JCPOA is also endangered by the start of Ebrahim Raeisi’s term as president. A deal which can once again strengthen Islamic Republic’s legitimacy and influence in the region.

The Abraham Accords, signed in August 2020, initiated a phase of normalization between Israel and two Persian Gulf monarchies, Bahrain and the United Arab Emirates (UAE). Followed by peace treaties with Morocco and Sudan in October and December 2020, all mediated by the United States. Since the Israeli-Egyptian and the Israeli-Jordanian comprehensive peace treaties in 1979 and 1994, this is the first occasion that Arab states officially intend to engage in political and trade relations with Israel. However, unlike the previous peace agreements, the Abraham Accords were influenced by political agendas rather than disputes over territorial integrity. Given that the UAE, Bahrain, Morocco and Sudan did not have any territorial conflicts with Israel, the political and strategic dimensions of these peace agreements were far more prominent. To what extent can these peace treaties pose a threat towards the stability of the MENA?

The balance of power in the Middle East and North Africa has played a vital role in the construction of these political agreements. Nowadays, classic military powers such as the United States, China and Russia are not the only dominant military forces in the region. Hence, in addition to arms being purchased from these global powers, some Arab states seem to be seeking a regional alliance to deter potential threats. The security and ideological threats from regional revisionist emerging powers such as the Islamic Republic of Iran, influenced the signing of such agreements.

Furthermore, the new balance of power in the region have made Israeli influence (and presence) is now closer to the borders of Iran, further increasing the possibility of a major conflict. The Abraham Accords which were meant to introduce stability to the region are conversely introducing new tensions. Correspondingly, Iran will increase its skepticism in its interstate relations with its Persian Gulf counterparts. Seeing both Iranian and Israeli power dynamics moving strategically closer and closer, the probability of an escalation of direct conflict consolidates. Thus, the deals that were meant to empower regional peace and stability might just ignite a major flame.

At the end of 2020, following the rising tensions between Iran, the US and Israel, an Israeli navy submarine entered the Persian Gulf through the Strait of Hormuz for the first time in history. Such provoking and offensive military actions are the result of Israel’s overwhelming confidence brought about by the Abraham Accords agreements. More recently, the tension between Iranian and Israeli vessels in the Persian Gulf, Arabian Sea, the Gulf of Yemen and the Suez Canal can portray a wider image of how unnecessary escalation of Israeli engagement can confront Iranian power dynamics and ignite new tensions. Also, how politically driven narratives such as the Abraham Accord can escalate skirmishes between Iran and Israel. The attacks in Natanz Nuclear Facility can proportionately introduce another dimension to this political and military confrontation between Iran and Israel.

Islamic Republic’s growing influence, nuclear developments to up to 60% enrichment, and its ballistic missile capabilities have become Israel’s and GCC states’ most pressing threats. Be that as it may, United States political intentions in the Middle East vary depending on the administration in the White House. Turkey is collaborating in a strategic alliance with Qatar, and Iran is developing its military capabilities; UAE and Bahrain had no choice but to normalize their relations with Israel to preserve their own national interests and strengthen their security.

The revitalization of the JCPOA and the newly elected President of Iran Ebrahim Raeisi on the other hand facilitates Iran to regain its conservative political charisma while keeping its liberal negotiations open and engage directly with the international community. Although, it may take Iran a step back in its nuclear program, it can nevertheless legitimize its regional presence as a rising power and subsequently roll back the Israeli newly emerged influence. Thus, the Abraham Accords and its participants see themselves threatened by the reestablishment of the JCPOA.

Israeli’s active presence in the region and its clashes with Iranian national security can subsequently trigger inevitable conflicts and destabilise the region. Such deals mediated by the United States can re-establish the obsolete ideological barriers between regional states on the matter of Israeli-Palestinian conflict and proportionately re-escalate regional tension. Although in short term the Abraham Accords portrays stability, normalisation and prosperity, but considering the above-mentioned potential consequences, and its interest clashes with the JCPOA, its long term damage to the stability of the Middle East should be concerning.

Given the fact that the US and NATO are now withdrawing their troops from Afghanistan, the region will experience a vacuum of power in which regional hegemons such as the Islamic Republic of Iran and Turkey will try to fill the empty space. A strategic opportunity for such major influences to expand their sphere of control in the region. In the same context, the GCC and Israel due to their normalizing relations and their common threat perceptions against Iran will try to counter Iran’s influence in Afghanistan ruled by Taliban. Furthermore, clashes between these two powers will introduce an emerging potential conflict to the region.

In the meantime, the new government of Ebrahim Raeisi will also have their own defensive and offensive strategies to preserve Iran’s national interest in Afghanistan. From diplomatic talks with Taliban and the first meeting of the newly appointed Foreign Minister, Hossein Amir-abdollahian with his Pakistani counterpart to military defensive capabilities being placed across the eastern border. Given the fact that the GCC and Israel will also have their own strategic forecast of the situation in Afghanistan, future direct or indirect conflicts between Iran and other claimants for a dominant position in the region will be inevitable.

The growing hostility in the region as a result of US/NATO withdrawal from Afghanistan and inspired by Israel’s new ambition to expand its influence closer to Iranian borders, can have impacts on both the population and the leadership in Iran. The newly elected conservative leadership with a sense of political unity between the Government, IRGC, Parliament, and the Judiciary may have wider range of policies and strategies than President Rouhani’s government. To create an early and strong legacy as their first political challenge, President Raeisi’s government and the conservative National Parliament might have a broader range of offensive options to take against any threats to Iran’s national security. Hence any offensive movement of Israel, UAE, and other GCC states in the region and specifically in Afghanistan could pose a security dilemma for the Islamic Republic of Iran in which Iran will react accordingly. As a matter of national interest, the population of Iran might also be in favor of such defensive actions which could result in direct conflicts or proxy wars. The same social support that the Iranians regardless of their political views gave to the martyrdom of General Ghasem Soleimani.

+ In light of the above, the escalation of tensions, new conservative leadership of Iran, and the offensive forthright progress of Abraham Accord’s normalization agenda are not only posing unnecessary threats to the region, but are also destructive to nearly all the diplomatic achievements of the JCPOA. Now that the chance of re-negotiation and re-vitalization of the Iran Deal is low due to the current political atmosphere of Iran as well as due to the escalating tensions in the Persian Gulf, Sea of Oman and the Red Sea and the potential dynamics of future conflicts being built in Afghanistan, the expansion of Israeli influence in the region can be destructive. The continual trend of these tensions can lead both Iran and Israel to a more aggressive policy making, and the absence of the US will serve as a catalyst to this process. Thus, the Abraham Accord were not only unable to bring stability to the region, but it is believed that further implementation of this normalization policy and Israeli engagement in the Persian Gulf will eventually ignite the fuel soaked region of the Middle East.

Nowadays, such normalization deals can pose a greater threat to the already destabilized region of the Middle East and North Africa. Given the strategic culture of regional hegemons such as the Islamic Republic, the presence of Israel could potentially threaten regional security. The security dilemma of Israel’s presence in the Persian Gulf will correspondingly provoke Iranians to take defensive actions accordingly, or offensive actions for deterrence. A defensive position which can be empowered by revitalization of the JCPOA. In a near future, we will be able to see which player takes a dominant role in controlling the region, Iranian rising power dynamics, or Israeli disruptive expansion of influence.