Year of Dog - a Turning Point in India-Russia Relations

The first blog-post in this sequence was penned on the eve of Chinese Year of Dog . It was an attempt to thoroughly analyse the state of India-Russia relations and their linear perspective from the eyes of an independent observer, not part of any corporate or institutionalised mechanism. Often, in the age of Internet and social media, narratives and not hard facts on the ground become the drivers of scholarly discussions impacting policies of various nations. Discourse on India-Russia relations is no exception.

Commenting on the first blog two of my highly respected diplomat friends wrote: “a rosy picture painted by a Russophile, which requires a reality check.” At the same time a number of my Russian friends, including scholars and analysts, were confident that India has already jumped on the US bandwagon. The very idea to start this blog was to put the ground reality in perspective.

Relations, specially enduring relations between any two nations transcending social, political and economic upheavals and transformations are based on many factors including vital strategic interests and geopolitical compulsions. With this in mind the author had tried to predict the developments in the Year of Dog. 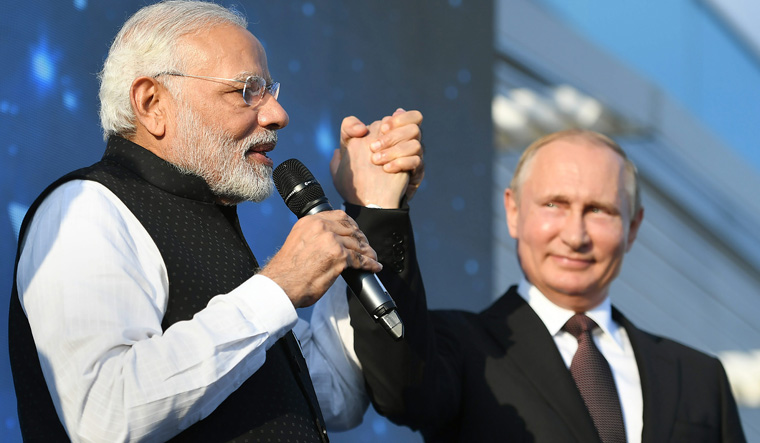 May 21, 2018 was perhaps a defining moment in bilateral India-Russia relations when one day informal summit between Prime Minister Narendra Modi and President Vladimir Putin in Russian Black Sea resort of Sochi took many by surprise. It took place under the shadow of the US CAATSA law threatening to jeopardise New Delhi's defence relations with Moscow – said to be the strongest pillar of bilateral “privileged strategic partnership”. Visuals from the Sochi informal summit displayed not only the deep chemistry between the two leaders, when breaking usual protocol, President Putin drove with Prime Minister Modi to the airport to personally see him off after hectic interaction throughout the day.

The informal Modi-Putin summit in Sochi, which surprised many at home and across the Atlantic was a turning point in India's foreign policy, which seemed glued to the US Indo-Pacific pivot where New Delhi would have the place of a junior partner in Washington's quest to curb China's growing clout.

No need to say that Sochi informal summit paved the ground for the formal , 19th annual summit of the two strategic partners on October 4-5 in New Delhi, which was crowned with the signing of the multi-billion dollar deal for the acquisition of S-400 'Triumf' air defence system for the Indian Air Force by ignoring threat of US CAATSA sanctions aimed at punishing Russia, Iran and North Korea. This was a litmus test for India's 'strategic autonomy'.

The Indian media reaction after the 19th Indo-Russian Summit indicates that in spite of vitriolic criticism from his opponents ( a normal thing in a democracy) on various domestic issues, Prime Minister Modi enjoys the solid backing of all the national political parties on his legacy Russia policy.

As if all of a sudden the public opinion awoke to the fact that Russia is the source of sensitive military technologies and 62 percent plus weapons of the Indian armed forces are of Russian origin.

There is a greater understanding now that in the rapidly changing world order and re-drawl of geopolitical landscape in the huge Eurasian space, India which is seeking a seat at the table of global powers, for a number of reasons simply cannot ignore Russia as an old and trusted ally. Russia, spread over the huge landmass from Pacific Ocean to Baltic Sea is the source of political, military, technological power and huge mineral wealth; can be a facilitator in India's connect with Central Asia and dilute China's growing influence in its soft belly. It is a win-win situation for both Moscow and New Delhi.

So we see the India-Russia relations have confidently moved forward in the Year of Dog in spite of doubts, but no less challenges are ahead in the Year of Earth Pig due to begin on February 5. Besides the threat of CAATSA sanctions the biggest challenge for the two countries is to find and mobilise stakeholders in boosting economic cooperation-the weakest leg of the strategic partnership.

In general, the Chinese believe , the Earth Pig is symbol of peace and relaxation on the outside with undercurrent of challenges inside.