A Roadmap for US-Russia Relations – An American View

Igor Ivanov’s recent article, “A Roadmap for Russia-U.S. Relations” provides a methodical Russian perspective of great value.[1] Here I will provide a practical American perspective, with the hope that it might help President Vladimir Putin and his senior aides help President Donald Trump, who is all alone.

Let’s start with the fact that the US Government (USG) is in grid-lock, deeply incapacitated by a pathologically dysfunctional secret intelligence community that is – at the highest levels – in constant betrayal of the public trust.[2] Were this secret intelligence community honest, it would now (in the aftermath of the election) be shutting down the “Russians hacked the election” story that is a complete fabrication invented by John Brennan with the support of James Clapper and Mike Hayden and the complicity of the fake news U.S. media including Fox News.[3] Until President Trump clears the actively hostile press out of the White House and creates his own Trump Studio and Truth Channel to communicate directly with the 200 million voters[4] who are now lied to every day by the U.S. mainstream and social media, both controlled by the U.S. Deep State and its Zionist under-belly,[5]our President is going to continue to be at risk of assassination, deception, defamation, impeachment, and neutralization. I expect the Director of National Intelligence (DNI), Dan Coates, to be fired soon. Not only has Coates failed to eradicate the false anti-Russian anti-Trump story, he has failed to make the secret intelligence community useful to the President, and worse, just yesterday, he was caught disparaging the President and saying he would have opposed a one-on-one meeting between our two Presidents.[6] 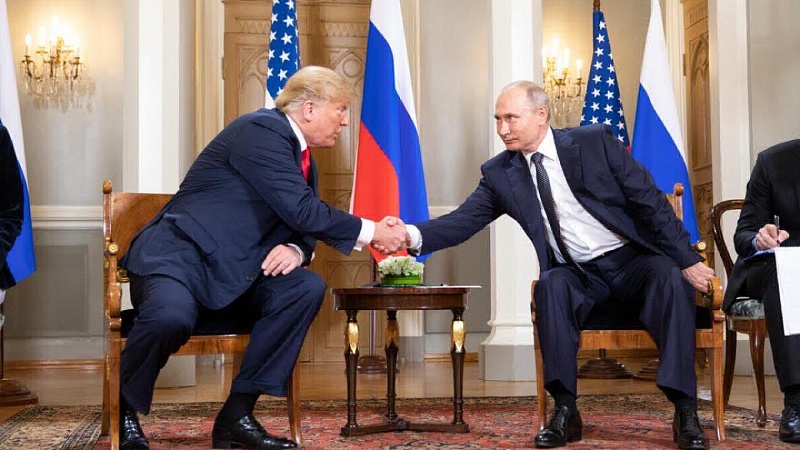 Let us add to that the fact that entire U.S. mainstream media, not only Crap News Network (CNN) and MSNBC but also Fox News and of course the standard newspapers and even The Weekly Standard, today a Zionist-controlled rag rather than a conservative voice, are actively lying to the public and seeking to create outrage over our President being presidential. I cannot overstate the contempt that I have for all of these people, as well as Members of Congress including Republicans that are members of the Bush-Cheney crime family. When someone like Representative Mike McCaul (R-TX) appears on Fox to attack our President, all anyone in Russia needs to know is that he is a) from Texas and b) a Bushie.[7]

Now let’s move on to what the U.S. public does not know, and where Russia could be helpful if the leaders of Russia Today (RT) can be found (or replaced). The U.S. public does not know that George H. W. Bush (Papa Bush) and Dick Cheney are the two greatest criminals in modern U.S. history, and that between them they not only directed a Gold War against Russia – a covert economic war not authorized by Congress, using off-budget gold reserves,[8]in which I believe Bill Browder was a leading agent for the Central Intelligence Agency (CIA) – but they also conspired with the Zionists beginning in 1990 to create the false flag attack now known at 9/11.[9] A major reason the Bush-Cheney crime family was so intent on winning the 2000 election by any means necessary was to ensure that Dick Cheney was in charge of the USG for 9/11, the younger George Bush being but a well-intentioned dolt.[10]

The U.S. public does not know what Russia knows about elite American banking criminals (including Bill Browder); elite American pedophiles; and elite American traitors who routinely betray their country in favor of the Zionists. The U.S. public does not know that Papa Bush was an active co-conspirator with Lyndon Baines Johnson (LBJ) and Allen Dulles in the assassination of John F. Kennedy (among whose “crimes” were candid communications with Nikita Khrushchev); or that Papa Bush for decades appears to have been facilitating massive drug smuggling into Texas with the entire Texas “justice” system being used to punish immigration and customs officials who try to do their jobs while also freeing captured drug runners through various subterfuges.[11]

There is good news. In May 2017 William Binney and I wrote to the Attorney General, Jefferson Sessions, copied to President Trump, and outlined how they could pull all the intelligence they needed on these elites from the National Security Agency (NSA) databases – NSA processes only 1% of what it collects, and is compromised by Freemasons, Opus Dei, Knights of Malta, and Zionist sayonim (9% of our Members of Congress and senior executives are dual US-Israeli citizens).[12] We have it all. Trump knows everything he needs to know about the Bush-Cheney crime family, the Clinton crime family, and the Obama crime family – and he knows they are merely the best of the servant class, the second tier criminals far beneath the 1% whose crimes are at global scale – starting wars as a profit center, manipulating interest and currency exchange rates, and so on. Unfortunately, the public does not yet know and therefore the President is at a disadvantage when facing the Deep State’s media machine.

What President Trump does not have today is a Trump Studio and a Trump Truth Channel that integrates text messages, emails, videos, posts, and shared documents, and that is open to all US citizens on an opt-in basis, with the assurance that nothing will be censored or manipulated[13] – that no one will be digitally assassinated as has been case recently with tens of thousands of conservative and progressive voices deleted by Facebook, Google, MeetUp, Twitter, and YouTube.[14]

There was a time when I thought RT was setting a new standard in global information sharing and public intelligence. I particularly salute the early acceptance by RT of Skype web cam interviews that enabled it to get a diversity of expert speakers who would not normally take the time to come into the studio in the city. Sadly, RT’s innovation stopped there. Today they have too many pseudo-American twits in bow-ties and loosely-educated hosts who are completely lacking in perspective and simply going through the motions. RT in its present configuration lacks intelligence, integrity, and imagination. There is not a single person at RT who could explain to President Putin, if asked, what holistic analytics or true cost economics are and why they matter to modern Information Operations (IO).[15] I speculate that there is nobody at RT from the “top boss” down to the best researcher, who can identify from memory the top ten threats to humanity, the twelve core policy areas, or the most significant demographic and regional trends where China, Russia, and the USA have absolute common interests.

From where I sit, there are three near-term priorities for consideration by President Putin that will help President Trump live up to his potential, survive his massive opposition from the Deep State and Shadow Government, and eventually work closely and collaboratively with President Putin, General Secretary Xi Jinping and others including President Bashar al-Assad and President Hassan Rouhani:

01 Shake RT Up and RT America especially. Get some real professionals in there, double their budget, and turn them into something they are not today: a public intelligence enterprise able to do what no one else can do today, which is to say, tell the truth about everything in easily accessed seven-minute long videos and one-page briefings. Focus heavily on the crimes against humanity that have been orchestrated by the US Deep State and the three U.S. presidential crime families who are now united in opposition against President Trump. Start naming names, starting with the names of the elite pedophiles, both Democratic and Republican, who are still in positions of power in Washington, D.C.

02 Propose to President Trump a small presidential information-sharing task force that completely by-passes the U.S. bureaucracy – and most especially the largely Zionist-infiltrated U.S. Department of State[16] and the Deep State-controlled secret U.S. intelligence community.[17] There is a need for both a national Open Source Agency in each of the big three countries (China, Russia, USA) and a multinational open source intelligence and information network that includes China and all possible partners including I must say specifically, Iran. I have written a presidential memorandum on what such an organization might look like,[18] and would merely observe that it is, in addition to being a foundation for improved relations among China, Russia, and the USA at the leadership level (the other levels will not matter until 2021), this would also be a foundation for creating the post-Western economy that President Putin and Foreign Minister Sergey Lavrov have indicated is necessary.[19] I agree.[20]

03 Focus on President Trump and President Trump alone. No one else matters. He must be made to feel that he can rely on President Putin to tell him the truth and to provide useful information that can be used against our common enemy, the Deep State and the Shadow Government and their Zionist underbelly and he must be made to feel that President Putin can be relied upon to protect a confidence and be a man of his word as I am sure he is.[21]

The current calls for forcing the American translator to testify about what transpired in the private meeting between President Trump and President Putin are political posturing. Everyone knows that the translator is sworn to secrecy and covered by executive privilege. Everyone knows that President Trump has every right to have a private meeting with his most important counterpart in the world. They are all terrified of the possibility that President Trump and President Putin are actually doing as I suggest above: agreeing that the Deep State is our common enemy, and agreeing to share information at the presidential level where it cannot be intercepted or manipulated or even “disappeared” as is so often the case with Russian communications to the Department of State, the Department of Defense, the CIA, and the Federal Bureau of Investigation (FBI).

The roadmap for a successful U.S.—Russia relationship is not complicated – if anything, Russian experts are over-complicating it while ignoring the enormous difficulty President Trump faces in dealing with a Deep State that is in complete control of the public narrative (I expect changes in Trump’s press team, they have been remarkably incompetent in the past 90 days).[22]

Respect and honor President Trump. Keeping him alive, in power, and well-informed is priority one.

Respect and honor the American public. The 99% are now awake but they do not have good information sources. Pending President Trump embracing my suggestion for a Trump Studio and Trump Truth Channel, RT, as weak as it is, is the next best thing. Double their budget, but get some leaders in there that actually know something about holistic analytics, true cost economics, and public education.[23]

Allow me to emphasize this later point. The center of gravity for global peace and prosperity is to be found in the hearts and minds of the American public. They have been abused, betrayed, lied to, and stolen from by the Deep State and its Shadow Government. Empowering the U.S. public with knowledge will empower President Donald Trump, and that will yield long-term dividends for Russia and all others.

The future of the world has come down to this: three men who together can defeat the Deep State, reboot the global economy, and denuclearize and demilitarize not only the Koreas, but the Middle East as well.[24]