Afghanistan and the issue of Transnational Conspiracy

The deplorable statistics of drug addicted people in Afghanistan exceeded one million and the poppy growth almost doubled, since the international community call for counter-narcotics. The most outrageous in this context is, that one third of the Afghan GDP looms from drug trafficking. The large portion of profit comes from drug trafficking flowing into the pockets of Governmental circles. This lethal-killing machine takes its toll on the vulnerable and defenceless population of the country. And the new reports of United Nations Office on Drugs and Crime (UNODC) illustrate Afghans have become a much relevant consumers of their own opium causing hundreds deaths a year – also because they can afford the lowest quality heroin only.

Afghanistan opium, at the international level, has created a drug market worth $65 billion, catering to 15 million addicts causing thousands deaths every year. Consequently, drug trade has becoming a most welcomed business for the Afghan Government, members of the parliament, local power brokers and the insurgents (Taliban and ISIS). That is why the Government time and time turns blind eyes to the appeal of the international community to chunk all land and air portals towards the passage of drug luggage and containers. Sources close to CIA say that transnational anti-crime and counter drug activities of South/West Asia depict the enormous drug cartels with tons of drugs making their way to Central Asia, South Asia, South West Asia, South East Asia, Middle East and Europe and America unimpeded. It also serves to resupply the organized crime groups with weapons of war coming into Afghan territories. Furthermore, the required chemicals for the heroin production – such as acetic anhydride – is entering the country without control e.g. from Germany down the Balkan Route. 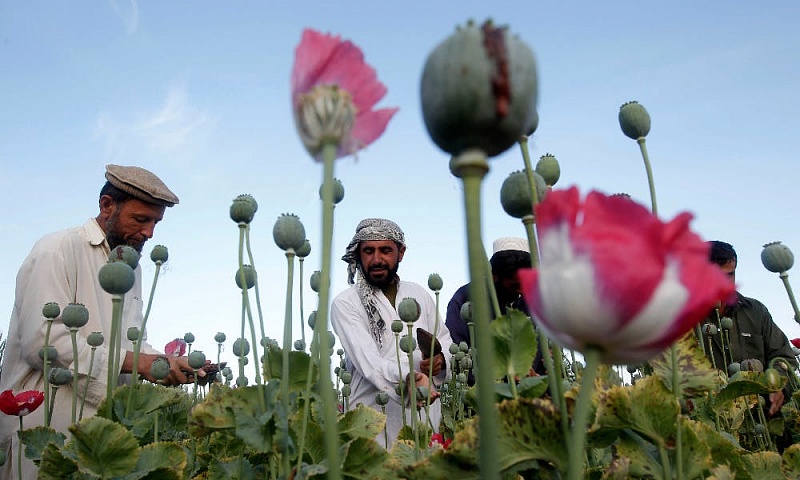 It gives the impression, that either there is a meaningless inspection or it is not existing at all. Score of sources have proven and there is no doubt that several ministries, e.g. responsible for the borders and tribal affairs, MOI, MOD, custom security, police, etc. are engrossed in bribery, intimidation, murder, kidnapping and ransom in conjunction with some part of the organized crime and illegal narcotics industry.

To be candid, the entire illegal drugs and narcotics manufacturing goes through the hands of Afghan government officials. Covert operations against organized crime rarely happen or happen with alerts to the organisations in focus, thus allowing narcotics industry to flourish. There are avers, since NATO forces are full of zip in Afghanistan, mutually drug cultivation and trafficking have two-folded. Conversely around 15'000 foreign troops help manage security in the country. Moreover, 4'000 regular soldier from NATO forces and 11'000 US and other special operations forces make up the balance. However, there is significant resistance from so-called Taliban, ISIS, independent local warlords, drug lords particularly in the areas where poppy are cultivated, drugs and narcotics are processed and trafficked.

There is no rule of law at the bordering areas, connecting Afghanistan and Pakistan. Amid Afghanistan and Iran and the central Asian countries, there is barely bullet rule, which in turn disrupts counter-narcotics efforts of the US Coalition. Furthermore, most senior leaders [presidents], secret services and law enforcement agencies of all countries surrounding Afghanistan, through Russia on the northern distribution route, are complicit in allowing the Afghan Government and its cronies to carry on narcotics allotment.

To be frank, there are little or no genuine inspections on the borders of Afghanistan, inside the country and in adjoining countries, allowing 90% of all global heroin being commonly free distributed from Afghanistan. It is safe to say that presidents and political pundits of all surrounding countries in the entire region are engaged to consent to this conspiracy to be persisted. All leaders of all countries know where the problem comes, but refuse to act. All of these leaders are complicit with the drug mafia in propagating this portion of major transnational criminality. They are complicit in creating massive addictions and in killing children and adults around the world.

Drug trafficking has become a pleasurable industry to the presidents and political authorities of the intact region. Very unfortunately, when they address the innocent citizen of the countries, they dub for counter-narcotics efforts but behind sagacity they co-operate with such a plot to keep on. When they are brazen out with the public, they spin and articulate that it is impossible to protect all Afghan borders. Yet most of all narcotics and other black market materials out of Afghanistan, along with war formulating stuff into Afghanistan, comes through, bought and paid for, by organized crime established borders and airports.

To be blunt, this is one of the prevalent shocking international transnational conspiracies, in all history of Afghanistan and the entire globe. This in turn dents democracy, interrupts free markets, depletes national assets and skills to be connected to criminality and kills or addicts innocent Afghans. As it is said, that transnational crime networks often pick on failed states, states like Afghanistan. In order to tackle down such conspiracy proper inspections need to be placed on all portals of Afghanistan – knowing this being difficult to be implemented and causing interferences on many levels.

According to Louise I. Shelley, Director of the Terrorism, Transnational Crime and Corruption Centre at George Mason University:

“Transnational crime is a defining issue of the 21st century for policymakers – as defining as the Cold War for the 20th century and colonialism was for the 19th.”

“Transnational criminal rings are becoming more and more powerful and universal and their mobility is growing. The means and resources of any state are not enough to seriously harm them”.

Therefore, participation of the US Coalition for further investigation at airports and borders of Afghanistan is indispensable. Otherwise, transnational organized crime results in disrupting peace and stability of nations worldwide and a huge part of it originating from Afghanistan. And to solve their drug problem at home, the heroin consuming countries certainly should be interested in law and order in Afghanistan.