“You Have No Place in Iraq": The Retaking of Fallujah and the Future of Iraq

This is not the first time since the fall of the Saddam Hussein regime in 2003 that the long-suffering city of Fallujah, dubbed the “City of Mosques” for the sheer number of these holy places that it contains, has come under siege. In 2003 and 2004 Fallujah, which was controlled by Iraqi Al-Qaeda fighters, was stormed by military contingents consisting primarily of U.S. troops. In 2007–2008 Al Qaeda was pushed out of the city by the local Sahwa (“Awakening”) troops.

After the withdrawal of U.S. troops, which was followed by the arrests of Sunni representatives at the start of the campaign to oust them from political life in Iraq, the government of the former Prime Minister Nouri al-Maliki faced mass protests in 2012–2013. The subsequent decision to disperse the protesters led to many casualties. The worsening of the overall social and economic situation in the country, the political crisis and transformations in the Arab world – all this played into the hands of ISIS (ISI, or Islamic State of Iraq, at the time), enabling it to broaden the scope of its activities by constantly exploiting the existing contradictions. In 2014 Fallujah, like many other Iraqi cities and villages, fell into the hands of ISIS. Two years later the city located 50 kilometres from Baghdad was reclaimed by the government. 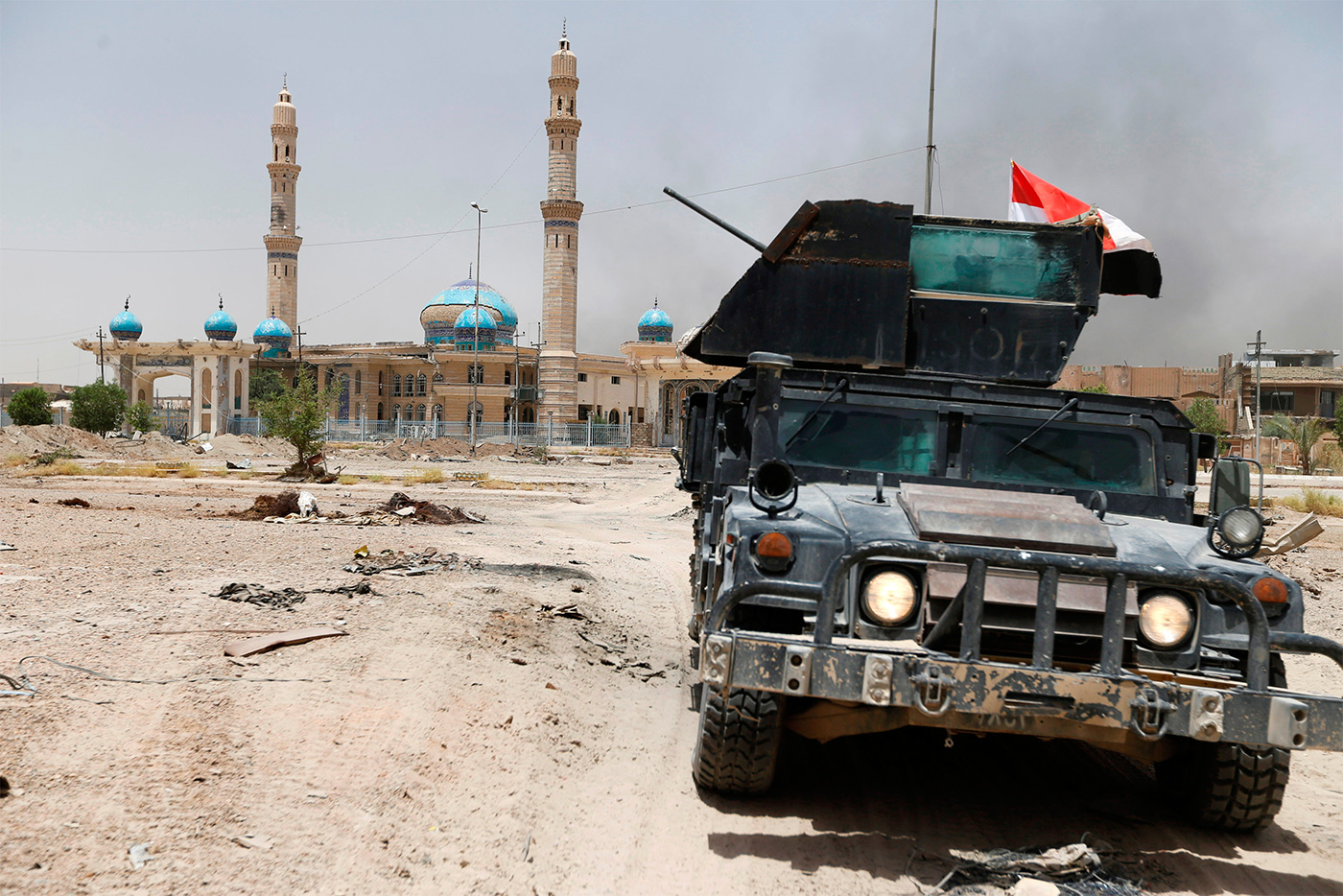 A mosque is seen in center of Falluja, Iraq, June 20, 2016. REUTERS/Thaier Al-Sudani

Surrounded by his generals, Prime Minister of Iraq Haidar al-Abadi delivered a speech on the occasion of the liberation of the centre of Fallujah and, addressing ISIS directly, told them that they “had no place in Iraq” and that its members would be brought to justice for their crimes. Al-Abadi said the government was working for the good of the people of Fallujah and was seeking to bring back peace and stability: “This is your city and it will be restored to you.” At the end of his speech he confidently announced another impending – the recapture of Mosul, Islamic State’s capital in Iraq. The Iraqi Shiite spiritual leader Ayatollah Ali al-Sistani also welcomed the liberation of Fallujah and blessed the security forces.

However, while such a discourse is necessary, there are serious differences concerning the future of the regions liberated from ISIS. Leading Iraqi media outlets have raised legitimate questions, chief of which is, what will happen after victory is won? Will Iraq be content with military victory? Does the government have a strategy for the rehabilitation of the regions and stabilizing the situation in the country?

While all the political forces agree that there needs to be a strategy for rebuilding Iraq, they differ in terms of the paths, methods and tactics for achieving this. Thus, the Shiites are concerned with the question of why some are trying to drive a wedge between the army and the Popular Mobilization Forces (al-Hashd al-Shaabi), considering that the latter was formed as a result of 2014 fatwa issued by Ayatollah Ali al-Sistani for the protection of Iraq. They also have doubts about the arming of the tribes in the Iraqi province of Anbar, arguing that the mobilization forces and the army are quite sufficient to bring about a military solution to the problem. They believe that such a move would eventually lead to a resumption of the war.

The Iraqi government does bring in the Sunnis to solve local problems, but they are poorly represented in the Iraqi political elite and their powers are limited. Thus, during the offensive on Fallujah, when reports started coming in about human rights abuses and the improper behaviour of some al-Hashd al-Shaabi groups (especially those financed by Iran), head of Anbar province Sabah Karhout called on the prime minister to step in, withdraw these troops from the city and immediately open an investigation into the incidents of torture, violence and other crimes. It is no coincidence that the offensive on Fallujah was intended to have the mobilization forces mop up the surrounding area and the approaches to the city, while the Sunni tribes would take care of the city itself (one of the tribal leaders reportedly pulled his forces out because of the unseemly actions of al-Hashd al-Shaabi). At present the city centre is controlled by the federal police of Iraq. This tactic was resorted to in order to prevent human rights violations by al-Hashd al-Shaabi, which eventually happened anyway, albeit not on a regular basis, according to Minister of Interior Mohammed Salim al-Ghabban. Moreover, representatives of the Iraqi parliament’s human rights committee declared that they had found no “substantial evidence” of crimes against displaced people from Fallujah. Even so, Ali al-Sistani had to issue a special order concerning the treatment of displaced persons and prisoners.

The United States and Iran supported Iraq and welcomed the return of Fallujah to the control of the government, which is not surprising considering the fact that the Iranian side – specifically, a unit of the Army of the Guardians of the Islamic Revolution (IRGC) led by Qasem Soleimani – controlled the ground offensive, while the U.S.-led coalition provided air support. Haidar al-Abadi later tweeted that Commander of United States Central Command Joseph Votel had met with the Iraqi Prime Minister to discuss the plan for the liberation of Mosul, while Qasem Soleimani had already left Fallujah and was headed toward Aleppo in Syria. 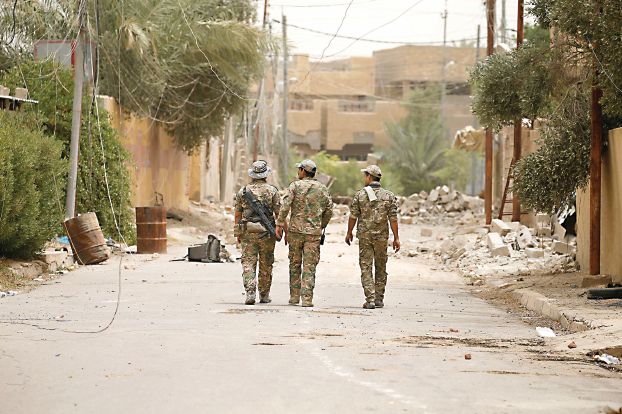 Iraqi army soldiers walk with their weapons in the centre of Falluja, Iraq, June 18, 2016

Meanwhile, analysts in Washington and Teheran are discussing how to return a sense of normalcy to life in the territories that are now suffering through a humanitarian disaster. The Iraqi government has thus been forced to turn to other regions in the country for help. Unless the strategic issue of the future of Iraq’s western regions is solved and a complex of measures is taken to develop them and include them in the political process, ISIS will be replaced by an old enemy in a new garb. For Iraq, Islamic State is more a consequence than the cause. The solution to Iraq’s problems hinges on the reform of political institutions, the restructuring of the economy, the streamlining of the judicial framework, the creation of a mechanism of an inclusive political process for all population groups, and the return of the persecuted politicians.

The reforms proposed by Haidar al-Abadi since he became Prime Minister continue to lose momentum. The idea of a government of technocrats that the Prime Minister is trying to promote has not been put into practice. There is no unity among political forces and the question of the future of existing paramilitary groups constituting the mobilization forces is not being addressed. When Mosul is recaptured the chance for changes in the country and breaking out from the vicious circle will appear. By that time, some improvements should happen. And some answers have to be given now. Failing that, the country may once again plunge into the chaos of contradictions.