Russia Doubles Down on Iraq Despite COVID-19

Russia’s key business interests in Iraq lie in the energy sector and hinge on the global oil and gas market, and Russian oil giants are continuing to operate on the ground despite the novel coronavirus and volatile international oil prices.

Russia’s key business interests in Iraq lie in the energy sector and hinge on the global oil and gas market, and Russian oil giants are continuing to operate on the ground despite the novel coronavirus and volatile international oil prices.

Russian Ambassador to Iraq Maksim Maksimov said in a recent interview with the Interfax news agency, “Iraqi offices and branches of Russian companies have been working as usual. Of course, they take all the necessary precautions against COVID-19. … If the situation on the ground deteriorates dramatically and poses a direct threat to the life and health of Russian employees, our operators have specific tried-and-tested plans in place, which may even involve repatriation. However, we hope that it will not be necessary to resort to these crisis-response scenarios.” 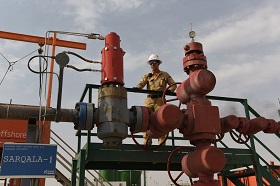 Speaking about the OPEC+ deal, Maksimov said, “The agreement to cut global petroleum output will definitely be welcomed in Iraq, which will allow the authorities to stabilize the budget policy and continue their efforts to restore the economy.”

Still, he mentioned the current risks, noting oil revenues in Iraq fell nearly 41% in March to around $3 billion, compared with more than $5 billion in February. As oil-producing countries’ budgets directly depend on oil sales, “the situation is fraught with grave consequences in the foreseeable future,” he added.

Moreover, the implementation-related aspects should first be settled for Iraq to comply with its oil-cut commitments. They will be a hard sell for international oil companies. The government will discuss the share of the cuts with them, with Russian companies possibly hurt, among others. The Iraqi Kurdistan government already asked Russia's Gazprom Neft to reduce its investment in the Sarqala oil project, but the company refused. The situation may also affect other Russian oil and gas companies in Iraq, including Lukoil, Rosneft and Bashneft.

The political crisis in Iraq has impinged upon bilateral relations. It arose following the resignation of Prime Minister Adel Abdul Mahdi amid last year’s mass protests, and the subsequent failure to form a new government.

As Maksimov said in an interview with Russia’s RIA Novosti in February, “Last year, a number of important visits of departmental delegations to Moscow and Baghdad were postponed along with the trips of business executives. Iraqi Speaker Mohamed al-Halbusi and the heads of some parliamentary committees are due to come to Russia this year instead. This shows that we would like to see the Iraqi government take office as soon as possible.”

Abdulrahman Hamid Mohammed al-Hussaini, the newly appointed Iraqi ambassador to Moscow, also spoke in February about the forthcoming meetings. He also said the parties were planning to schedule the visit of Iraqi President Barham Salih to Moscow as soon as the government was formed. The two countries’ ambassadors also reported on bilateral plans to hold a regular meeting of the Russian-Iraqi Intergovernmental Commission for Trade and Economic, Scientific and Technical Cooperation in Moscow this month. Russian Deputy Prime Minister Yury Borisov and Iraqi Foreign Minister Mohamed Ali al-Hakim are due to preside over its work. Nevertheless, further changes in the government may still affect the plans. 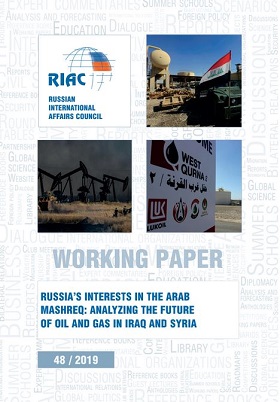 Viktor Katona, Ruslan Mamedov:
Russia’s Interests in the Arab Mashreq: Analyzing the Future of Oil and Gas in Iraq and Syria

Recent reports from Iraq say that Mustafa al-Kadhimi, the former intelligence chief who has been named Iraq's prime minister-designate, stands a higher chance of success than the previous candidates. Two aspects are noteworthy in this respect: signals from Moscow and the Iraqi parliament.

Russian Foreign Ministry spokesperson Maria Zakharova said in April that Moscow hoped to see internal signs of political stabilization in Iraq. She said this “should be provided by the earliest possible formation of a new national government. We proceed on the premise that the task will be successfully accomplished by [Kadhimi]. With the information available at this time, most parliamentary factions in Iraq are ready to support his candidacy.” At the same press briefing, Zakharova pointed out that Russia “considers it unacceptable to make any attempts to use Iraq as an arena for score-settling, which we believe constitutes a violation of international law and the country’s sovereignty and does damage to its national interests.” She apparently was referring to concerns that Iraq could become a battleground for a proxy war between Iran and the United States.

Iraqi parliament members appeal to national interests when making statements about the necessity to purchase Russia’s S-400 missile defense system. Indeed, the country’s limited ability to control the sky resurfaced when, on Jan. 3, the United States killed Qasem Soleimani, the leader of Iran’s Quds Force, and Abu Mahdi al-Muhandis, the deputy head of Iraq's Popular Mobilization Units. Iran responded by targeting US military bases in Iraq. Back then, the country’s parliament recommended that all foreign troops leave the territory, a step that still requires more consideration. That said, Baghdad again began contemplating a purchase of air-defense systems, including the S-400. Iraq can’t be satisfied with the US decision to deploy Patriot systems to the country as it aims to step up security at military bases hosting American military personnel. Whether the move will be effective is subject to debate even in Washington, but it fits into the US plan to withdraw from Iraq while keeping a presence there. Against this background, Iraq seeks to diversify military supply chains.

In light of the expected Kadhimi-led government, the parliamentary Security and Defense Committee submitted a detailed study to the caretaker prime minister requesting procurement of the advanced S-400. This was confirmed by committee member Badr al-Ziyadi, who told Al-Sabah, “The issue has already been discussed with relevant figures at the general command of the armed forces and now awaits the prime minister’s agreement.” However, it’s the new Iraqi Cabinet that will have the necessary powers to deal with the issue. As Ziyadi put it, the parliamentary committee “will support the next Iraqi government’s relevant decisions and will definitely provide it with proposals and recommendations.” Nonetheless, Maksimov, the Russian ambassador, said that no official requests had been received yet. In his interview, he said, “Recent developments have undoubtedly attracted more interest in Russia’s air and missile defense systems, particularly S-400 anti-aircraft missile systems. Yet it is premature to get to specifics. So as I said before, if we receive the request from Iraq, we will work on it.”

It also remains to be seen whether the two sides will cut a deal that entails different regional risks and could invite US sanctions. Besides, implementation would require a stable government in Baghdad. As snap parliamentary elections are possible in Iraq, serious discussions about military and technical cooperation may be postponed until a new government has been formed.

First published in the Al-Monitor.

Rate this article
Share this article
FOLLOW THE LATEST DEVELOPMENTS
Project
Security System in the Middle East
Related materials
Russia’s Interests in the Arab Mashreq: Analyzing the Future of Oil and Gas in Iraq and Syria

A New Oil Campaign in Iraq

Unrest in Iraq: Continuation of the Arab Spring or a New Political Reality?

In the case of Iraq, we are talking about the crisis of an entirely new political system — one that is barely 15 years old

Tags
Iraq, Russia, Oil, OPEC+, COVID-19, S-400, Sanctions
Reader's choice
HideShow
South Korean Arms for Canada and Poland: NATO’s Reserve Arsenal for Ukraine?
The Distributed World
Karabakh in Crisis: Toward a New Road of Life
Does Syria’s Road Back to the Arab Family Go Through the UAE?
Unprecedented Sanctions? By No Means