But really it began in 1998, with US anger at the democratic election of President Hugo Chavez, with his avowedly socialist and nationalist program.

In ensuing years, Chavez (1998-2013), and Nicolás Maduro (2013-present), earned the loyalty of the Venezuelan poor and lower middle class through progressive social justice reforms. Some – not all – of the elite and upper middle class were alienated. Some emigrated, some remained and plotted for the socialists’ overthrow.

Neither Bush nor Obama attacked Venezuela’s socialist government militarily. But especially after 2013, the US stepped up political and economic sanctions against Maduro’s Venezuela, focussed on Venezuela’s rich oil resources and on banking institutions. Venezuela in response began to build closer economic and political ties with Russia and China. Tensions with US inevitably began to build.

Matters might however have remained in uneasy balance until Trump, sensing that Venezuela was easy low-hanging fruit, began to press for firmer action. Angered at the failure of US policy in Iran and Syria, Trump looked for an easier target closer to home: Venezuela, rich in oil and in the US backyard. He was encouraged in 2018-19 by his sabre-rattling War Party lieutenants, Pence, Pompeo and Bolton, to encourage and to fund a serious regime change operation. He agreed.

We have just seen the end of the first phase of this so far abortive operation. Results have not been impressive. Inconclusive marches and counter- marches took place over many weeks in the capital, Caracas. They have only demonstrated the deep divisions in Venezuelan society between supporters and opponents of Maduro, and how these divisions to some extent mirror Venezuela’s class and race divisions. And of course the rich in Caracas have the wealth and the US connections, which to some extent compensates for their numerical weakness as compared to the now politically aware masses.

But only up to a point. Trump and his advisers, here as regionally, have disastrously underestimated the long history and persuasive power in Latin America of simple nationalism and opposition to Yanqui imperialist greed. No one forgets the infamous United Fruit Company in Central America, the coup in Chile against Allende, and so on.

Such sentiments and memories tend to unite Latin American people in defence of national sovereign governments, both within Venezuela and regionally. There is a national spiritual glue in Venezuela that was not present in Georgia, Ukraine, Libya, Iraq, or Syria: in all those cases there were deep sectarian or ethnic fissures in society ready for US ‘colour revolution’ regime change architects to exacerbate and exploit.

Venezuela is a tougher nut to crack. But still, I must confess, at the beginning I thought the odds were against maintenance of Venezuelan sovereignty. Simple geography, US preponderance of Western Hemisphere military power, the initial US diplomatic mobilisation of all the Western alliance nations and Venezuela’s neighbours against Maduro, and his government’s virtual bankruptcy under US sanctions, suggested he had little chance. In early January, I did not hold out much hope. I thought that if the US struck hard and fast, it would be over quickly for Venezuelan sovereignty.

It was not to be. The game -changers were: the loyal spirit of the Venezuelan people, Maduro’s cool nerve under pressure, the firmly declared diplomatic support of Russia and China, and the publicised despatch of 400 Russian ‘technical contractor’ specialists to Caracas.

No one should have any illusions what these Russians are there to do – to help defend the person of the President and his country’s political institutions against criminal coup d’état efforts in the officer corps and senior police ranks in Caracas . If any were tempted to attempt such a coup, the formidable investigative and punitive powers of this Russian Praetorian Guard sends a strong deterrent message.

Guaidó has heard it – a few days ago he fled across the border to neighbouring Colombia, thereby earning the contempt of Venezuelans for his claim to be a credible alternative government. Venezuelans are unimpressed by governments in exile, from their long revolutionary history. 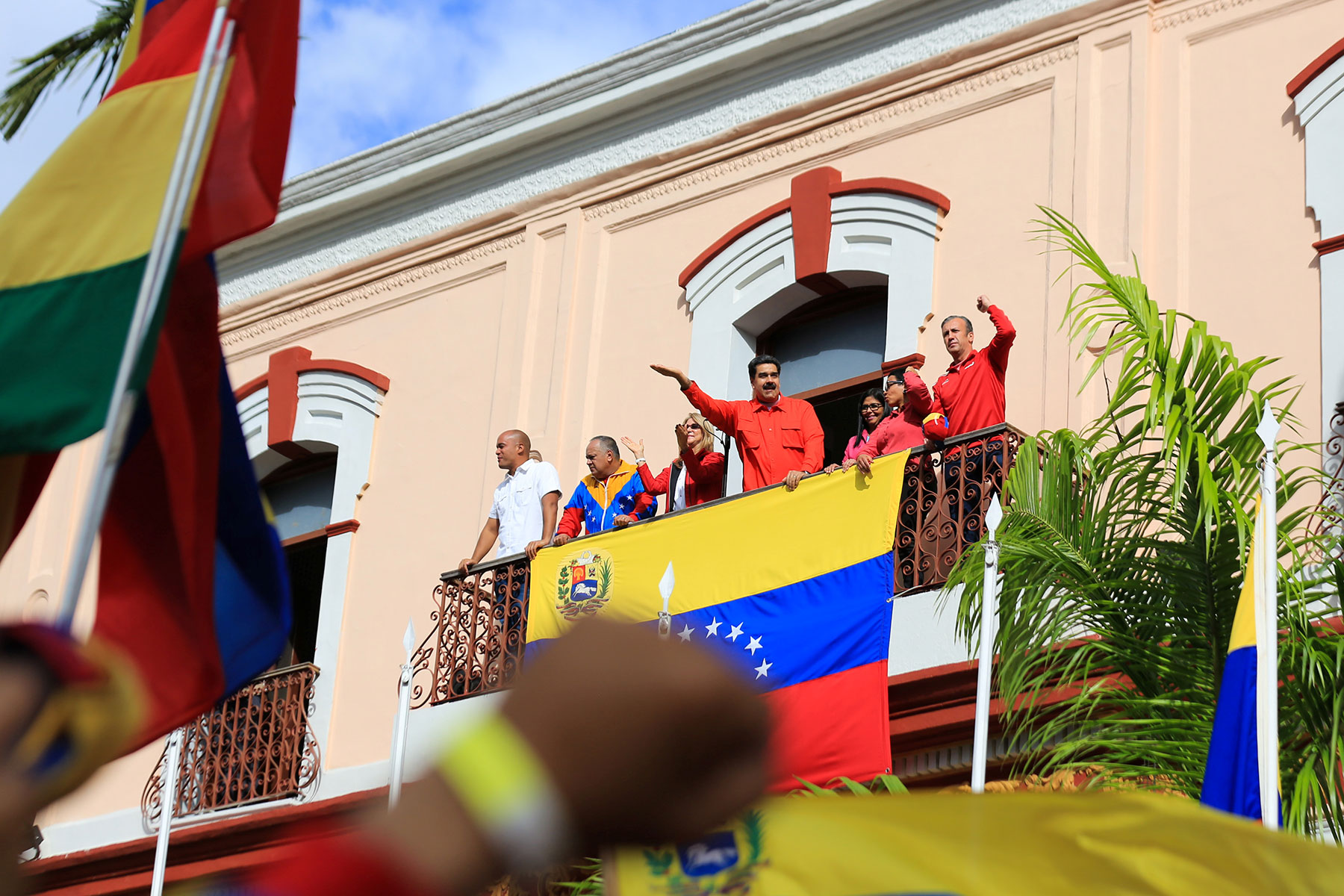 Ivan Timofeev:
Are US Sanctions Against Venezuela a Regime Change Precursor ?

The farcical but violent regime change shenanigans last weekend at the borders with Brazil, Colombia and Ecuador have fizzled. No local insurgencies took control of any enclaves of Venezuelan territory, which might have given a foothold for US-led military intervention. Borders held firm despite noisy and occasionally violent efforts to breach them with US-organised ‘food aid’ trucks. At least one undercover US Marine was exposed, directing operations at one border crossing. A food van, blocked on a bridge, was set on fire by a Molotov cocktail incendiary device ignited and hurled by an insurrectionist. The showy Richard Branson benefit concert was countered by an equally noisy concert from the Venezuelan side. As theatre, it was inconclusive. By Sunday night, Venezuelan nerve and territorial integrity had held.

Then came the Pence ‘Lima Group’ summit this week in Colombia. Preplanned days earlier, this was intended to be the diplomatic consolidation of the anticipated people power gains over the preceding week at the borders.

It turned out to be a failure. Even before it began, Latin American diplomatic support for the US position of regime change by any means was ebbing away.

Regional countries, first Brazil, then Colombia, then Ecuador, let it be known they opposed US-led military intervention in Venezuela. These currently right-wing governments came belatedly to realise how unpopular and electorally costly such support would become for them at home: especially with the prominent role in the US diplomatic campaign of the universally loathed and infamous Elliott Abrams.

In the end, Pence in the Lima Group meeting was reduced to talking about tightening sanctions. At least for now, the military option has been quietly abandoned.

Venezuelan sovereignty still faces huge challenges, though immediate risks seem to have passed. Maduro will have to deepen his nation’s economic and political links with Russia, China and India. Their terms will not always be generous: India is reportedly buying Venezuelan oil at a large discount. But these relationships will enable the Venezuelan economy to begin to turn the corner towards currency stability and control of the runaway inflation it has experienced under pressure of brutal US sanctions.

The Venezuelan upper class will have to finally decide their loyalties: are they compradores, in which case they might as well cut their losses and emigrate to the US now, or will they stay comfortably in Caracas and get behind the defence of Venezuelan sovereignty?

For now, Venezuelan resistance continues to be an inspiration for all of Latin and Central America, of courage in the face of Yanqui regime-change intimidation such as Latin America has so often experienced.

First published in the OFFGuardian.

Rate this article
Share this article
FOLLOW THE LATEST DEVELOPMENTS
Related materials
Are US Sanctions Against Venezuela a Regime Change Precursor?