Will Greenland Become an Independent State?

Independent Greenland may fall short of necessary human and material resources to provide the qualified personnel for state and local government, the judiciary system, police and military structures, research institutions, diplomatic and other missions abroad. Greenland authorities are unlikely to be able to solve problems involving the protection of natural resources without the support of Denmark or some other foreign assistance.

The indigenous people of Greenland are the Eskimos, who came to the island from the west about two millennia BC. Later on, the Norsemen began to settle on the island and founded two major settlements – Esterbyugden (near present-day Qaqortoq) and Vesterbyugden (near Godthaab – currently Nuuk). In 1262, the Icelandic Althing swore allegiance to the Norwegian king. Iceland together with its colony Greenland [1] fell under the rule of the King of Norway. In 1397, the Kalmar Union, in which Denmark proved dominant, proclaimed the “eternal peace and union” of Denmark, Sweden, and Norway. Due to the Denmark-Norway union that existed from 1380 to 1814, Norway with its dependencies of Iceland and Greenland, eventually found itself in complete subjugation to the Danish monarchy [2].

In the first quarter of the 18th century, the Norwegians and the Danes began a new era of active colonization of Greenland and established trade relations with the indigenous population of the island - the Eskimos. In 1774, Denmark announced a monopoly on trade with Greenland. The Danish Royal Greenland Trading Department and its inspectors and governors on-site managed the government of Greenland and the life of the colonial settlements [3].

Under the peace agreement signed in Kiel on January 15, 1814, Denmark ceded Norway to the Swedish king, but retained Iceland, Greenland and the Faroe Islands. Starting from the second half of the 19th century, the United States openly expressed interest in Greenland and a willingness to buy the island. Having transferred sovereignty of the Danish West-Indies (Virgin Islands) to the United States in exchange for money, Denmark gained US recognition (in accordance with the Treaty of the Danish West Indies of August 4, 1916) of its right to extend the sovereignty of Denmark over the “Danish colonies in Greenland” over the whole of the island [4].

However, Norway, which sought to strengthen its positions on the east coast of Greenland, disagreed with such developments. In 1921, it refused to recognize Danish sovereignty over the whole of Greenland. In 1931, a Norwegian trapping and research expedition proclaimed Norwegian sovereignty over part of the coast of East Greenland, which was confirmed by the Norwegian government. Denmark and Norway agreed to submit the dispute to the Permanent International Court in The Hague, which considered the case in 1933 [5]. It recognized Norway’s annexation of this part of the island as illegal, finally confirming Greenland’s status as a territory under the full sovereignty of Denmark. In 1953, Greenland's colonial status ended as the island was incorporated into the Danish Realm as an amt (county). 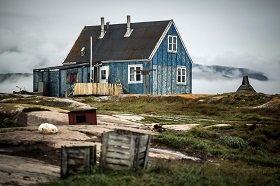 In 1979, Greenland received limited autonomy and became a self-governing part of the Danish kingdom. Greenlanders gained the right to their own legislature, taking control of some internal policies, the economy, as well as social and cultural development. One of the first decisions of the authorities of the island was to change Danish names to Eskimo. Greenland is now officially called Kalaallit Nunaat and its capital is Nuuk (former Godthab) [6].

In a referendum in February 1982, a majority of the population voted for Greenland to withdraw from the European Economic Community. Central authorities agreed with this decision of Greenlanders. In February 1984, the leadership of the Common Market decided to put this into effect and on January 1, 1985, Greenland left the EEC, while Denmark retained membership. However, the island continues to be an administrative part of Denmark; its representatives participate in the national parliament, in the activities of the Nordic Council and the Nordic Council of Ministers, while the Danish government maintains control over foreign affairs and defense matters.

Article 11 of the Act on Greenland Self-Government states that the powers granted to Naalakkersuisut shall not limit the Danish authorities’ constitutional responsibility and powers in international affairs, as foreign and security policy matters are affairs of the Realm. However, in accordance with Article 12 of the Act, Naalakkersuisut may, on behalf of the Realm, negotiate and conclude agreements under international law with foreign states and international organizations, including administrative agreements which exclusively concern Greenland and relate entirely to the authorities taken over under the agreement.

A special section of the Act is entitled GREENLAND’S ACCESS TO INDEPENDENCE. Its Article 21 states that if a decision regarding Greenland’s independence is made by the people of Greenland, negotiations shall commence between the Government and Naalakkersuisut. An agreement on independence shall be concluded with the consent of Inatsisartut and shall be endorsed by a referendum in Greenland. The agreement shall, furthermore, be concluded with the consent of the Folketing.

At the same time the Act provides for the allocation of an annual subsidy of DKK 3,439.6 million by the Government to the Greenland Self-Government authorities, measured by 2009 price and wage levels and to be adjusted annually in accordance with increases in the general price and wage index [8]. 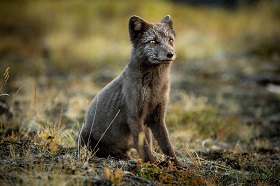 To resolve disputes concerning the Self-Government authorities’ responsibility in relation to the central authorities, the Act provides for the establishment of a board consisting of the parties’ representatives and three judges of the Supreme Court.

However, passing this Act has not taken the issue of granting Greenland independence off the table. To assess the impact of the Scottish referendum on the island’s prospects for gaining complete independence from Denmark, we must take into account a number of specific economic and social aspects that could make this prospect less attractive to the almost 60 thousand people living in Greenland.

The main economic activity of the islanders is fishing, which Denmark helps equip with modern technology. The islanders are also engaged in whaling, shrimp and crab fishing as well as seal hunting. Fish and seafood products traditionally occupy the leading place in the structure of Greenland’s exports. In 2005 that share was 87 per cent, which makes the economy of the island completely dependent on this sector. The main markets for Greenland’s exports are Denmark (86.7 per cent), Spain (6.0 per cent), Germany (1.6 per cent), Iceland (1.5 per cent), the USA (1.2 per cent) and the UK (0.9 per cent) [9]. 80 per cent of Greenland’s imports come from Denmark. The budget of Greenland is formed mainly by revenues from seafood exports and tourism and is largely dependent on subsidies allocated by the authorities of Denmark.

Greenlanders are pinning their hopes for gaining independence on the rich natural resources of the island, its adjacent shelf and the water area. According to United States Geological Survey, Denmark estimates the hydrocarbon reserves of Greenland to be 48 billion barrels of oil equivalent, including 31 billion barrels on the north-eastern shelf and 17 billion barrels on the western shelf [10]. In autumn 2010, the British oil and gas company Cairn Energy pulled the first oil from Greenland’s shelf. At present, the authorities have granted 20 licenses for the exploration of hydrocarbons and production in an area of 200 thousand square kilometers.

Apart from significant hydrocarbon reserves, Greenland has deposits of uranium, zinc, lead, copper, nickel, iron, molybdenum, thorium, chromium, gold, silver, coal, cryolite, as well as rich bio-resources of the adjacent seas. The use of these resources may increase the revenue of the self-governing island, but will inevitably reduce subsidies from the central government of Denmark.

The qualitative and quantitative state of human capital in Greenland may create significant difficulties for the autonomous territory to effectively ensure the stable functioning of its own economy, state and commercial structures. Modern industry and the required skilled workforce are virtually non-existent on the island. The only university, which is located in the island's capital Nuuk, has just 150-200 students. Only a small part of the island's population has a university degree. 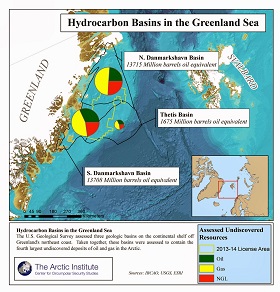 Independent Greenland may fall short of necessary human and material resources to provide the qualified personnel for state and local government, the judiciary system, police and military structures, research institutions, diplomatic and other missions abroad. Greenland authorities are unlikely to be able to solve problems involving the protection of natural resources in the territory of the world's largest island, its shelf and exclusive economic zone, not to mention self-reliant production and processing, without the support of Denmark or some other foreign assistance.

The right of the local authorities to revenue from mineral resource activities is not backed up by independent technical capabilities to extract and process these resources, as relevant technologies can be only brought from Denmark or other countries. In addition, the investment attractiveness of these resources for foreign mining companies and investors gives rise to doubts connected to the high costs associated with their extraction and exploitation.

It is also worth noting that the United States Thule Air Base is an important segment of the US security system, which is part of the North American Aerospace Defense Command. The island is home to submarine and aircraft bases, radar installations and meteorological stations of the United States. Greenlanders are vigorously seeking to increase compensation for the use of their territory, in particular, for the major military air base of the United States in Kanako (Thule). Gaining independence by Greenland is fraught with changes to the status quo and can put these important strategic objects of the United States on its territory into question. There is every reason to believe that the United States will try to avoid such a situation. It is possible that formally independent Greenland may become completely dependent on another state as it is now on Denmark, whose subsidies continue to play a key role in the socio-economic development of the island's economy.

Currently, the Prime Minister of self-governing Greenland Aleqa Hammond simultaneously performs the functions of the island’s Foreign Minister. One of the most important directions of her foreign policy activities is attracting investors for producing oil, natural gas and minerals.

In December 2013, her meeting with the Prime Minister of another self-governing part of the Kingdom of Denmark – the Faroe Islands – Kai Leo Johansen resulted in reaching an agreement on closer cooperation in areas of common interest, such as fishing and seal hunting as well as participation in the Arctic Council. The Heads of Government also agreed on cooperation within the Danish kingdom, holding annual top-level meetings and strengthening contacts between the civil services of Greenland and the Faroe Islands. Speaking on the foreign policy of the Government of Greenland, Aleqa Hammond emphasized that it will help Greenland to integrate into the international community, which would be the first step on the way of transforming into a society that would like to become more independent [11].

We can assume that gaining complete independence of the island is not an issue on today’s agenda, but in the longer term, it can well be put on it again.

9. Information of the Russian Trade Representation in Denmark (http://www.denmark.mid.ru/inftp/inftp_51.html)

11. “Hammond is leaving no doubt about her aspirations, as irritating as that might be for some.”