What May 8 Means for Germany

PhD in Philology, Leading Researcher at the German Studies Center of the RAS Institute for European Studies

Germans observe May 8 as their day of deliverance from the National Socialist dictatorship, commemorating the millions of victims fallen from one the world's bloodiest regimes that mechanized mass murder and was responsible for the banalization of evil, according to historian Eugen Kogon.

Germans observe May 8 as their day of deliverance from the National Socialist dictatorship, commemorating the millions of victims fallen from one the world's bloodiest regimes that mechanized mass murder and was responsible for the banalization of evil, according to historian Eugen Kogon [1].

Russia and other countries liberated from German occupation perceive May 8 and 9 as a day of great victory in the ugliest war of the 20th century, which took over 27 million Soviet lives. So, what exactly does May 8 mean to today’s Germans whose grandfathers fought in what we here in Russia consider enemy trenches?

Despite the 70-year gap between now and 1945, the perception of May 8 in Germany is somewhat shaded, for numerous historical reasons. On the one hand, for over 40 years of the existence of the two German states, as their two different systems were engaged in fierce information warfare, the perception of this victory over National Socialism was different in each. Not a full-fledged winner state like Poland or Yugoslavia, whose soldiers fought side by side with the Red Army, the German Democratic Republic was rehabilitated from its Nazi past through its participation in the Socialist bloc and the Warsaw Pact. The communist activists who fought Hitler’s dictatorship, such as Ernst Thälmann and many others, were elevated to the ranks of national heroes, and the Soviet Union and its Red Army were seen as the liberators who gave the German people and the GDR a new life and new opportunities.

For over 40 years of the existence of the two German states perception of this victory over National Socialism was different in each.

As for the Federal Republic of Germany, with its Western occupation zones, the denazification process flowed along different lines, with British and American troops rather than the Red Army viewed as the main savior. This was aggravated by the ferocious confrontation between the East and the West, which ignited immediately after the division of Germany. Hence, the propaganda machines in Washington and Bonn eagerly labeled the USSR an invader, and accused it of enslaving half of Europe and establishing a regime similar to that of the Nazis. In fact, this enemy image is a favored tool of modern Western info-warriors who revive these old, mothballed, clichés.

The painful affair of the expulsion of millions ethnic Germans from the territories lost by Germany after 1945 is particularly significant. 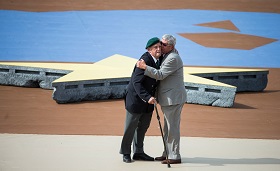 The duality of the West-East liberation seems to still be alive, although the USSR/Russia actually enjoys a considerable moral advantage. Following the commitments under the Germany unification accords, Russia has fully withdrawn its troops from Germany, while the British and the Americans are still there, as are their nuclear weapons. As became clear during a recent scandal, the Ramstein air base provides the platform for drone warfare against Pakistan, Afghanistan and Iraq, which kills not only terrorists but also, controversially, thousands of civilians. Therefore, the aftershocks of the Cold War and post-war division of Germany are still in effect producing a visible imprint on the Germans' perception of events in May 1945. To this end, the painful affair of the expulsion of millions ethnic Germans from the territories lost by Germany after 1945, i.e. Silesia, West and East Prussia, the Sudetes, Alsace and Lorraine, frequently accompanied with killings and pillage, is particularly significant. The peoples of Europe, who had suffered under Nazi occupation, vented their anger on those who largely had nothing to do with the Hitler regime and were guilty only of being German. Reminiscences of those events and the deportation of Soviet Germans to Siberia and Kazakhstan are still alive in the minds of their descendants and blacken the view of May 8. For many Germans the day is mixed with tears, and not of happiness.

At the same time, for hundreds of thousands of Nazi camp survivors – Jews, resistance fighters and others – May 8 is a genuine second birthday, because liberation meant their physical survival. The memory of concentration camp prisoners is a pillar of the education system in Germany.

The memory of concentration camp prisoners is a pillar of the education system in Germany.

Notably, the extensive de-Nazification program that has been running since 1945 (despite the diverse ideological tracks followed in the two Germanies) has formed an utterly new type of German. Are they better or worse? On the one hand, modern German society is more open, peaceful and tolerant, its overall image is definitely positive. But on the other, the assault on Hitlerism has damaged historic figures such as Friedrich the Great, Otto von Bismarck, Gerhard von Scharnhorst, August von Gneisenau and many others who are now indirectly associated with the Nazi dictatorship or seen by many Germans as the forerunners of National Socialism or at best as remnants of a past alien to modern realities. This is how today’s new German was created, and the perception of May in Germany should be viewed in this context.

This is how today’s new German was created, and the perception of May in Germany should be viewed in this context.

Today one may confidently assert that Germany has overcome its history, as revanchism remains for political outcasts and keen interest in WWII, especially in the Waffen SS and Wehrmacht, attracts close attention from law enforcement. Most Germans are ashamed of those 12 years and are working hard to prevent a repeat, viewing May 8 as a day to celebrate that they have prevailed over history and themselves, to celebrate their rebuilding of their identities, and re-assessment of the past.

Rate this article
Share this article
FOLLOW THE LATEST DEVELOPMENTS
Tags
Germany, World War II, WWI, WWII, 70th anniversary of the Victory Day
Reader's choice
HideShow
The Arctic Is a Complex Region Which Cannot Be Designated with a Single Status
Russia — Germany: Perceptions and Motives
Discourse Has Changed From Space as a Sanctuary to the Next Warfighting Domain
The World Order Crisis and the Future of Globalization
Is Anarchy the Mother of Order?