What Does the Afghan President’s Visit to India Tell Us?

Doctor of History, Deputy Director of the Institute of Oriental Studies, Russian Academy of Sciences

On 28-30 April 2015 president Ashraf Ghani of the Islamic Republic of Afghanistan paid an official visit to the Republic of India. The visit was the subject of considerable attention. The thing was that after becoming the new president of Afghanistan at the end of last September Ashraf Ghani was in no hurry to visit India, despite the fact that this country is an important foreign policy partner of Afghanistan and a major investor in its economy (with capital investment in excess of 2 billion US dollars, making it the fourth biggest donor country). Before going to India, President Ghani paid visits to China and Pakistan, was received at a high level in the USA, took part in an international conference on Afghanistan in Britain, and visited Saudi Arabia.

These steps by the current Afghan president demonstrated that he is preparing to make some adjustments to the foreign policy priorities established under the previous president, Hamid Karzai. In the last years of his presidency Karzai, who was head of state in Afghanistan for 13 years, distanced himself from the West, publicly criticised individual actions by the US and NATO armed forces in his country and barely concealed his displeasure with the policy of Pakistan, accusing the country of not making enough effort to fight the Taliban and other forces undermining stability in Afghanistan. In 2011 he visited India and signed a strategic partnership treaty with it, under which India pledged to provide aid in training military personnel and to supply certain types of arms. Islamabad saw the treaty as pretty much an attempt at a geopolitical encirclement of the country from the east and the west, while to the west Pakistan saw an alliance by India not only with Afghanistan but also with Iran.

Ashraf Ghani’s visit to Delhi was by all accounts intended to demonstrate a definite continuity in Kabul’s policy in the region, and its interest in economic aid and extensive cooperation with Delhi. Did the visit live up to expectations? On the one hand, it undoubtedly did, since the Afghan leader managed to establish contact with prime minister Narendra Modi, who is popular both in India and abroad, and to discuss bilateral cooperation. On the other hand, there was no breakthrough in relations. The visit ended as it had begun, on a fairly low note. The leaders sidestepped the issue of strategic partnership. Narendra Modi expressed understanding of Kabul’s efforts to establish closer relations with Islamabad, since the security situation depends to a large degree on these relations. “We share Afghanistan’s pain,” he said, “in connection with the terror and violence of extremists who threaten people’s lives and block progress.” 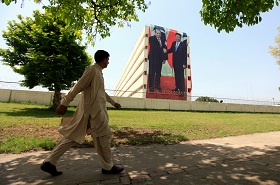 The two sides considered the trade and transit agreement signed by Afghanistan and Pakistan in 2011. Modi stated that India should join this agreement in order to make it possible for Afghan goods to be transported to India and Indian goods to Afghanistan via Pakistan. Implementing these plans, he stated, would make it possible to revolutionise road transport in Asia. He also emphasised that India intended to help build the Iranian deep-water port of Chabahar, which will open up access for Afghanistan to the world’s oceans, bypassing Pakistan.

In view of the fact that President Xi Jinping of China arrived in Pakistan about ten days before Ashraf Ghani’s visit to India, and the two sides agreed to extend their work constructing the Pakistani port of Gwadar, which in the long term could also be used by Afghanistan, it is not difficult to note the competition between these two infrastructure projects and their sponsors.

It is also telling that Ashraf Ghani was not accompanied on his trip to India by his former chief competitor in the presidential campaign, Abdullah Abdullah, with whom he now officially shares power. It is believed that Abdullah Abdullah, who holds the post of Chief Executive Officer, specially created for him, is more favourably inclined towards India than the country’s president. He unofficially expresses the interests of the “northerners”, who relied on support from India, Iran and Russia during the internecine war of the 1990s. The absence of Abdullah Abdullah from the delegation would seem to be evidence of Kabul’s current unwillingness to change its priorities, symbolising its reliance on multilateral international aid and financial and military support from the USA and the NATO countries, and also its hope of an improvement in Indo-Pakistani relations.

Rate this article
Share this article
FOLLOW THE LATEST DEVELOPMENTS
Project
Political and economic dynamics in the countries of Central Asia
Tags
Afghanistan, India, Pakistan, Ashraf Ghani
Reader's choice
HideShow
Coronavirus as a Problem of Fathers and Sons
Why the G20 Won’t Save the World
How Does the US Hybrid War on Russia Induce and Constrain Eurasian Integration?
Global Tech Companies Counter Online Terrorist Content
The Infrastructure Competition Between the West and China: A Co-Prosperous Future?