Ukrainian NITKA: Grasp ALL, Lose All

The ground-based naval aircraft training facility NITKA, built in the 1970s -1980s near the city of Saki on the Crimean Peninsula, now Ukraine, which seems to be in terminal decline. Due to the Ukrainian leaders’ vacillation on cooperation in the defense-sector, Russia, NITKA’s main user, has launched construction on its own complex, as have India and China, who also have Soviet-built aircraft carriers.

The ground-based naval aircraft training facility NITKA, built in the 1970s -1980s near the city of Saki on the Crimean Peninsula, now Ukraine, which seems to be in terminal decline. Due to the Ukrainian leaders’ vacillation on cooperation in the defense-sector, Russia, NITKA’s main user, has launched construction on its own complex, as have India and China, who also have Soviet-built aircraft carriers.

NITKA was put into service in August 1982, when the facility’s ramp was first used to ski-jump a T-10K, the prototype for the SU27K carrier-based fighter, later mass produced as SU-33. Until the late 1980s, the facility had been the site of numerous groundbreaking experiments, including testing the first Soviet steam-powered catapults to be installed on the Ulyanovsk heavy aircraft carrying cruiser, which was laid down in 1988 but which was never completed. After 1991, emerging systems tests at NITKA practically ceased, although sea-based aircraft flights continued, with Russian SU-25UTG and SU-33 carrying out flights to the Crimea for six to eight weeks for training. Disturbing signals emerged during the presidency of Victor Yushchenko, who resolutely shut down cooperation with Moscow. The training flight series planned for September 2008 was disrupted, as on August 9, 2008 Ukraine’s Foreign Ministry announced that training Russian carrier-based aircraft in the Crimea was inadvisable due to the Russian Black Sea Fleet’s participation in the military operation against Georgia. Russian pilots who were already deployed at the Ostrov airfield near Pskov, waiting for permission to take off for the Crimea, had no choice but to return to their Severomorsk-3 airbase, although payment had already been made. 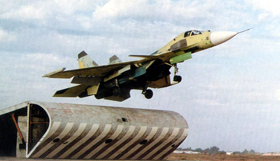 Training in the Crimea resumed in 2010, once Moscow decided to build its own facility. There was intense speculation in the media about where it would be located, with guesses ranging from Archangelsk to the Far East. Finally its location, Yeisk, by the Sea of Azov, was made public.

Reports about construction work on the Yeisk facility appearing in the media in 2011у. In spring 2012 photos appeared to prove that a ramp and runway had been built, and in autumn 2012 more pictures seemed to show that assembly work had started on arresting gear, i.e. a system of cables for deceleration aircraft making deck landings. 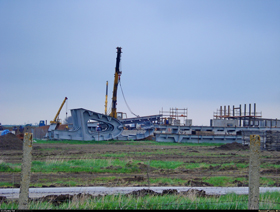 Sea-based aircraft are expected to make their first flights there in 2013, with the facility scheduled to be commissioned in 2015. The construction of a national training complex worth billions of rubles stands as testament to the fact that Russia’s military command appreciates both the vital role played by sea-based aviation and the need to maintain existing potential. Russia’s Defense Ministry seems serious about resuming construction of aircraft-capable ships, since a new training facility would obviously exceed the needs of Admiral Kuznetsov, the only one in the class whose service life expires in the next decade.

Additional motivation for Russia to build its own facility came after the Ukrainians all but opened the Crimean NITKA to foreign specialists, primarily the Chinese, with whom Kiev eagerly shared information and even equipment. Moscow was powerless to stop Kiev calling the shots about property obtained during the distribution of the Black Sea Fleet and other elements of the country’s Soviet inheritance, but equally, it would have been unwise to risk leaking Russian secrets.

China was another real contender for using NITKA, but proposed a cooperation framework completely unlike the one Ukraine expected. First, Beijing was interested in the facility setup and equipment required for developing carrier-based aviation. The Chinese’s most valuable acquisition was a non-flying T-10K previously used at NITKA and several arrester components from the repair set. 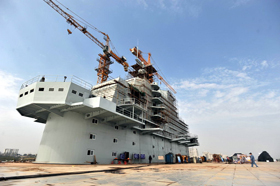 China also obtained access to carry out a detailed examination on the operable arresters. Scrutinizing foreign pieces is an intrinsic component of their aircraft carrier program. The first unit China acquired for this purpose was the Australian decommissioned light aircraft carrier Melbourne. Built in 1943-1945 in Great Britain, the aircraft carrier Majestic was moored at the outfitting quay as soon as WW2 ended. In 1955, she was commissioned and handed over to Australia to be renamed the Melbourne. In 1982, Australia decided to give up the ship due to defense budget reductions. In 1985, the decommissioned Melbourne was sold to China at 1.4 million Australian dollars, completely stripped of its electronic components. However, the steam catapult, arresting gear and homer system optics remained intact. It took years to scrap the ship, layer by layer. Some reports say that dismantling the Melbourne was only completed in 2002, when China had already received the aircraft carrier Varyag, bought in Ukraine.

As a result, China has found the opportunity to familiarize itself with a real-life, albeit decommissioned, carrier combined with the years it had to examine NITKA and its equipment, extremely helpful as it builds its own infrastructure for sea-based aviation and aircraft-capable fleet. While refitting the Varyag, commissioned in September 2012 under the name Liaoning, the Chinese knew exactly what they wanted to obtain.

In the 2000s, China began building two training centers for its aircraft-capable fleet. The best known facility reproducing the configuration of the deck and superstructure is located in Wuhan. However, speculation in the Russian media that the center is intended for training sea-based aviation pilots are wide of the mark, because the aim is in fact to prepare the carrier crew, primarily the air wing technicians.

Deck-based aircraft training is planned at the facility on Huludao Island in the Yellow Sea, construction on which, including a ramp and arresting gear, began in 2009. Chinese J-15 fighters copied from the Russian SU-33 have already made flights from this new airfield.

Hence, Beijing no longer needs the Ukrainian facility, having comprehensively mined it for all that it needs.

Negotiating with Russia on purchasing the aircraft-capable cruiser Admiral Gorshkov (currently aircraft carrier Vikramaditya) back in the mid-1990s, India was another candidate for using the NITKA center. In August 2012 NITKA was reportedly planned for training pilots of the Vikramaditya, which was to be handed over next year. However, even if Indian pilots do go to the Crimea, they would not stay long. Back in February 2012, it was became public knowledge that India was building its Shore-Based Test Facility (SBTF) in Goa [1]. The complex is a full equivalent to NITKA, designed by the Russian Nevskoye Design Bureau. Russia also supplied the arresting gear, homer optics, as well as the radio and TV equipment. The SBTF will be commissioned in 2013, and photos available on the Internet seem to underline this point.

However, NITKA is no good for training pilots for carriers of any other origin. Consequently, by late 2013 or in 2014, the facility is likely to become totally irrelevant, and Ukraine will face the problem of finding a further use for it. 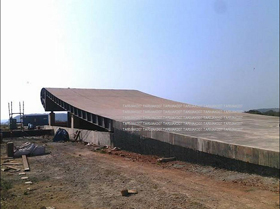 Establishing a NITKA-based museum there, perhaps involving Russia, seems the most logical scenario. That future would at least be better than leaving it to be stripped for all that’s valuable – its RC and metal components – which would appear to be the only alternative. Ukraine’s financial losses due to the discontinued Russian lease will be felt but not too severe. Until last year, the leasing fee amounted to $ 700,000 a year, and only rose to two million in early 2012. However, reputational damage will be more severe, since all Ukraine's current and potential partners in military-technical cooperation must surely have drawn the proper conclusions.