Ukraine’s Energy Future Lies in Good Governance, Not in Diversification

Diversification at any cost is still perceived as a ‘silver bullet’ for Ukraine’s energy security. The country’s dependence on Gazprom is seen as the key challenge for ensuring the country’s national security. However, inefficiency, mismanagement, the selective application of reform packages, and war in its eastern regions are Ukraine’s biggest threats. Settling internal disputes in a way that guarantees respect for the legitimate interests of all social and political groups is therefore a clear “must.” Doing so will lay the foundation for successful energy reforms and transparent governance, thereby paving the way for future investments.

Diversification at any cost is still perceived as a ‘silver bullet’ for Ukraine’s energy security. The country’s dependence on Gazprom is seen as the key challenge for ensuring the country’s national security. However, inefficiency, mismanagement, the selective application of reform packages, and war in its eastern regions are Ukraine’s biggest threats. Settling internal disputes in a way that guarantees respect for the legitimate interests of all social and political groups is therefore a clear “must.” Doing so will lay the foundation for successful energy reforms and transparent governance, thereby paving the way for future investments.

Ukraine’s dependence on foreign energy supplies is an issue of major concern for the current government and is perceived to be one of the key threats to the country’s national security. Attitudes toward this problem have remained the same before and after February 2014. In fact, virtually all of proposed diversification solutions – both under the Yanukovich and Poroshenko presidencies – have one element in common: an obsessive fixation on diversifying energy imports and shifting away from natural gas from Gazprom. Ukraine has already made several attempts, both successful and not, to find alternative sources of supply by building a physical reverse flow interconnector with Slovakia, mulling the re-gasification terminal option, and even exploring new alternative pipeline routes.

Alternative pipelines remain ‘pipe dreams’, while attempts to build a Liquefied Natural Gas (LNG) import terminal have so far been unsuccessful due to a number of significant logistical and supply challenges. Turkey will most likely veto the passage of LNG tankers via the Bosporus, and the cost of such deliveries will not permit Ukraine’s re-gasification terminal to compete with pipeline gas supplies from the EU and Russia.

In addition, the examples of Poland and Lithuania have shown that new LNG contracts - even with lower spot prices - are more expensive than traditional pipeline supplies. In November 2014, Reuters reported that Lithuania would pay at least 10% more for Norwegian LNG than for Russian pipeline gas in 2015. Norwegian LNG will cost almost $400 per 1,000 cubic meters, while Gazprom's shipments cost about $40 less.

Theoretically, Azeri LNG supplies might be a feasible commercial option but would require the construction of a liquefaction plant on the Georgia’s Black Sea coast and the commitment of gas reserves for supply to Ukraine. The future of this option is rather bleak, especially taking into account the current oversupply of competing pipeline projects focused on receiving Azerbaijani gas supplies.

Reverse flow – the only operational solution

Alternative pipelines remain ‘pipe dreams’, while attempts to build a Liquefied Natural Gas (LNG) import terminal have so far been unsuccessful due to a number of significant logistical and supply challenges.

Until now, only reverse flow options to Ukraine from the EU have been accessible and operational. According to Ukrtransgaz data, reverse flow shipments launched in 2012 accounted respectively for 2.13 billion cubic meters (bcm) in 2013 and 5.1 bcm in 2014 of gas supplies. In 2014, reverse flow supplies covered 12.7 % of Ukraine’s domestic gas consumption. The oversupply of natural gas in Europe led to competitive price offers for reverse flow shipments, especially when compared to the undiscounted price offered by Gazprom to Ukraine during the spring/summer period (April 1 to September 30, 2015). However, the fall of oil prices changed the overall price dynamics in the wider Europe - Gazprom’s price for Ukraine fell to $247/1000 cubic meters for the second quarter of 2015. This number offers a pricing advantage over reverse flow shipments from the EU.

Gazprom: too expensive for Ukraine?

Political turmoil, economic crisis, and armed conflict have led to a significant reduction in primary energy and natural gas consumption in Ukraine.

Between 2010 and 2013, the price charged by Gazprom to Ukraine’s national energy company Naftogaz - considered by Kiev as excessive and unjust – was used as a main argument for diversification away from Russia. According to Ukraine’s State Statistics Committee data, Gazprom shipped 37.5 bcm in 2011, while billing Naftogaz $11.35 billion. Imports decreased to 33 bcm in 2012, falling a further 15.5% to 27.9 bcm in 2013. The cost of Russian gas imports reached respectively $10.2 billion in 2012 and $10.68 billion in 2013. This was a significant financial burden for Naftogaz; indeed, while supplies dropped by more than 25% between 2011 and 2013, the total amount paid to Gazprom decreased only by 5 %.

Inefficiency and mismanagement at the heart of the matter 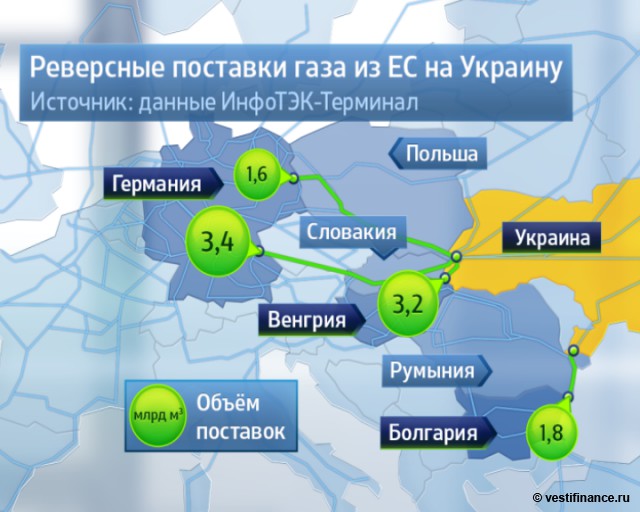 The decrease of energy imports/domestic gas consumption and lower prices should have reduced the deficit of national energy company Naftogaz. In reality, the company’s losses increased from 17.96 billion UAH in 2013 ($2 billion) to 85.45 billion UAH ($7.59 billion) in 2014 [3]. Though non-payments and national currency devaluation have contributed to Naftogaz’ shortfall, they cannot explain the threefold increase in the company’s deficit. Residential gas prices went up 50% as of May 2014 and industrial consumers continued to pay market-based tariffs, higher than the average price of imported gas - all of which should have helped to alleviate the company’s deficit. In fact, Naftogaz’s relatively cheap domestic gas production (17.2 bcm in 2014) covered an essential part of socially significant consumption (residential and district heating – 22.1 bcm) and in 2014, a (partial) cross-subsidy was required only for 5.1 bcm. The transit of Russian gas via Ukraine – requiring the usage of natural gas as a fuel for compressor stations – was one of key sources of Ukrtransgaz’ (transportation subsidiary of Naftogaz) income. In 2014, transit of Gazprom gas to Europe generated 17.42 billion UAH ($1.5 billion) in profits.

This sharp decrease in both consumption and imports was mostly due to the collapse of the country’s industrial sector.

According to various media reports, part of Ukraine’s deficit was due to mismanagement of production and gas flows. For example, in December 2014, the Ukrainian national weekly ZN.UA published the summary conclusions of the Audit Chamber of Ukraine. The report claimed that between 2011 and 2014, some 2 billion cubic meters per annum (bcma) produced by Ukrnafta – an upstream subsidiary of Naftogaz – were sold to private entities at the highly discounted price of $15 - $26/1000 cubic metres, representing only a fraction of Ukraine’s industrial tariffs. Naftogaz was forced to source these volumes abroad by paying on average $700 million per year. It is estimated that at least 3 bcm of gas produced by Naftogaz and its subsidiaries do not reach intended customers in the residential/heating sector. 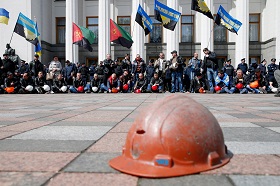 REUTERS/Valentyn Ogirenko/Pixstream
Anna Tsybulina:
Ukraine's Economy: Where from and Where to?

Mismanagement in the state-owned company is combined with the over-taxation of the private (‘independent’) gas producers. Ukraine’s 'independents' are an important domestic source of natural gas supplies. Ukraine produced 20.5 bcm of gas in 2014, down 1.0 bcm when compared to 2013. Private producers, however, increased their output by 18 % to 3.3 bcm. ‘Independents’ holding 100 bcm of proved gas reserves could in theory quickly increase their production to 5-6 bcm/year [4].

While the Ukrainian leadership took some steps to show its commitment to reforms – such as adopting the Third Energy Package compliant gas market law (Law N. 2250) and thus breaking Naftogaz’s monopoly – Kiev has still a long way to go. However, further steps towards reform should be coherent with a general fiscal and energy policy. New laws should also be efficient in practice and not only on paper. For example, while adopting market liberalization reforms in theory, the Ukrainian government often chooses a different path in practice, for instance, by sharply increasing gas taxation for private producers in December 2014. The new fiscal regime clearly favors the license–holder of the large fields (e.g. Naftogaz) over smaller private enterprises and risks undermining both the growth of “independents” and the liberalization of Ukraine’s gas market. Subsoil fees (the equivalent of royalties) jumped from 28% to 55% for shallow fields (above 5,000 m) and from 15% to 28% for deep fields (below 5,000 m). New taxation might kill the goose that laid the golden eggs and undermine the prospects for domestic natural gas production.

Part of Ukraine’s deficit was due to mismanagement of production and gas flows.

Energy efficiency is another area where Ukraine is lagging behind both its eastern and western neighbors. Ukraine's energy-saving potential could be as much as 40% - 50% of its current energy consumption. According to the World Energy Council, energy consumption within Ukraine's GDP reached 0.47 million British thermal units (Btu) last year, three and a half times higher than the average for countries in the Organization for Economic Cooperation and Development (OECD). While some energy-saving and energy-efficiency measures were implemented by previous governments, the introduction of such policies were effectively blocked by lobbies of domestic energy intensive industries. In 2008-2013, the energy intensity of Ukraine's GDP decreased only by 3.5% - a meager result even if compared to rather modest progress made by neighboring Russia and Belarus. Energy-efficiency measures are particularly cheap to implement in Ukraine. In 2000 - 2013, per unit energy consumption of the Russian economy decreased by 34%, 5 % alone in 2011 - 2013 [5].

Mismanagement in the state-owned company is combined with the over-taxation of the private (‘independent’) gas producers.

A stable and competitive regulatory regime, coupled with internal political stability, can pave the way for an expansion of durable and stable domestic energy supplies in Ukraine. Yet energy reform is not merely a function of relevant policy measures – it also depends on internal peace and stability in Ukraine. The loss of Crimea has not impacted Ukraine’s energy system, but the expansion of hostilities in Donbass – Ukraine’s industrial heartland - could lead to a full-scale nationwide energy catastrophe. There is a high risk that if unrest continues, it will spread from the industrial regions to the energy heart of Ukraine – to Dnepropetrovsk, Kharkov and Poltava regions. It is important to note that 80% of Ukraine’s natural gas output is extracted in Poltava and Kharkov regions. Only the peaceful resolution of internal tensions, taking into account the interests of all regions and parties, will help to revive Ukraine’s economy and its energy sector.

The new fiscal regime clearly favors the license–holder of the large fields (e.g. Naftogaz) over smaller private enterprises and risks undermining both the growth of “independents” and the liberalization of Ukraine’s gas market.

From a purely commercial prospective, energy cooperation between Russia and Ukraine make perfect sense, especially taking into account the remaining economic interdependence between the two countries. For example, despite a political crisis nuclear energy ties between the two countries remain strong. In 2014, Ukraine bought nuclear fuel for $628.176 million. An essential part - worth $588.831 million – came from Russia. The cooperation persists despite (often unconstructive) interference of politics in the business processes.

The future of gas cooperation is more uncertain and heavily depends on the position of Ukrainian government. From a purely rational economic point of view, cooperation with Gazprom – especially in the time of low prices – is commercially viable and outcompetes all available or planned diversification options. However, politics in nowadays Ukraine interferes with business and not always in a positive way. Leaders in Ukraine’s business and civil society should prevent politicians from going down the ‘blind alley’ of threat scenarios and concentrate on a de-politicized energy dialogue between the two countries on a technical and business level.

2. Author’s estimates based on Gazprom and Naftogaz statistics.