The War in Mali: the Road to Nowhere

Doctor of Historical Sciences, Leading Researcher at the Institute of Africa of the Russian Academy of Sciences

The situation in Mali changed radically after France intervened in the conflict between the Tuareg people, Islamic fundamentalists and rebels who ousted President Amadou Toure. Although the country’s north is now under French and Malian military control following a swift and relatively bloodless operation, the likelihood of reinstated nationhood is far from clear. The appointed president Dioncounda Traore’s legitimacy is flawed, the army is demoralized, and the country has been plunged into conflict and anarchy. What kind of future lies ahead for Mali?

The situation in Mali changed radically after France intervened in the conflict between the Tuareg people, Islamic fundamentalists and rebels who ousted President Amadou Toure. Although the country’s north is now under French and Malian military control following a swift and relatively bloodless operation, the likelihood of reinstated nationhood is far from clear. The appointed president Dioncounda Traore’s legitimacy is flawed, the army is demoralized, and the country has been plunged into conflict and anarchy. What kind of future lies ahead for Mali?

Françafrique: A Factor in the Mali Crisis

After the French colonial empire collapsed, Paris launched its Francafrique framework designed as a latent mechanism to preserve its influence in former colonies. France’s secret diplomacy in the African continent has not been that selective in the tools used, employing under-the table deals, bribery of officials, assassinations, coups and armed intervention in sovereign states’ internal affairs.

On October 13, 2012, in his address to the National Assembly of Senegal, French President François Hollande said that “the age of what was once called Françafrique is over”. But France’s strategic and economic interests became more significant than this finely worded political rhetoric, with the coup in Bamako and the military intervention being a clear-cut follow-up to this Françafrique policy. In his time, President Amadou Toure was quite prophetic saying “Paris is more dangerous than Timbuktu”. Hollande’s declarations that France sent troops to Africa to defend democracy, and not for gain, are nothing more than political courtesies capable of impressing only exalted Paris grandmas.

Upon arrival in Bamako on February 3, Hollande declared that the French military mission in Mali was complete. Online media outlets showed overjoyed Malians dancing in the city streets and waving French flags. But this apparent celebration was accompanied by mass looting and attacks on shops owned by supporters of Sharia rule. The small victorious war was over. 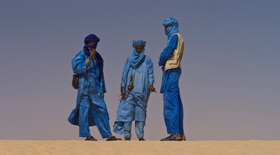 Who did the French, then, actually defeat? During the discussions that preceded deployment, the French political elite talked about the Tuareg as using the unrest in Bamako to proclaim a sovereign Azawad. But do not forget that the Tuareg Malian citizens, in fact, they can be seen as the state’s stepchildren, who have long fought for their rights against a government that is prone to respond with counterinsurgency expeditions, bombing and demolition of water wells. Therefore, the discussion shifted to Islamic fundamentalists, Salafis, the al Qaeda of Maghreb and the organization Ansar Dine, since recognizing the fact that France had intervened in an internal conflict and was bombing Malian citizens would have seemed improper. After the bombing raids on the country’s northern cities, the Tuareg were forgotten and replaced by terrorists and Islamists. The civilian losses have still to be calculated but over 100 people are known to have been killed in the French air raids on the town of Kona. At the same time, some Tuareg tribes had rejected Sharia law and clashed with the Islamists back in June 2012. The Islamists captured Tuareg headquarters in the town of Gao but later were driven out with heavy losses.

No distinct line can be drawn between the fundamentalists and the Berbers, but at the same time, they cannot be written off as one and the same. It is the struggle against Bamako which turns them into situational allies.

Tuareg separatism is a factor in Mali’s postcolonial history. Certain armed groups were, no doubt, expelled from three towns in the country’s north, but the Tuareg have disappeared into the sands of the Sahara and mountains of Sahel. Desert borders are transparent, while Azawad spans the territories of Niger, Burkina Faso and Algeria. What next: bombing Tuareg camps, killing women and children and poisoning water wells? Some say terrorist bases will be targeted. But nomads need no bases. The desert is their home; the camel’s hump and Toyota Jeep with mounted large-caliber machinegun are their bases. Omnia mea mecum porto. Deal-making is also out of question, since the Tuareg are an unstructured non-institutionalized community – a multitude of tribes, chiefs and religious groups that constantly unite, quarrel and war with each other. There is just no single figure that could represent this fluid crowd in talks. Certainly, the emissaries of al Qaeda in the Islamic Maghreb, among them Afghans, Pakistanis, Algerians and Moroccans, took advantage of Tuareg separatism to win support from the younger generations within Berber-language tribes, Arabs and Moors. No distinct line can be drawn between the fundamentalists and the Berbers, but at the same time, they cannot be written off as one and the same. It is the struggle against Bamako which turns them into situational allies. Faced by regular French troops, the Islamists retreated, but they have not been defeated, and are not willing to lay down arms. Islamic fundamentalism is entrenched in the Maghreb and Sub-Saharan Africa, while French Defense Minister Jean-Ives Le Drian insisted that the Mali operation will only take several weeks and on February 10, said that France was planning to withdraw troops in March. However, his optimism does not seem to be well founded. 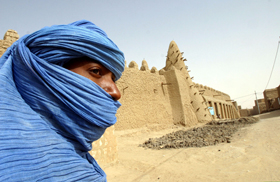 For France, a preferable scenario would see its troops replaced by UN peacekeeping forces, with French soldiers likely to acquire a new role that is supported by ECOWAS contingents. UN bases should be located in areas of Mali and Niger where the French Areva company has uranium prospecting and development operations. Meanwhile, the EU instructors would rearm and train the Malian army, which works out as cheaper than fighting. As soon as the situation stabilizes, the French would stage presidential elections to implant their protégé, probably the current appointed president Traore, nicknamed stopper in the wake of these political cataclysms, who can hardly count on a fair victory. But given this situation one can hardly expect the French to be highly principled. Ex-premier Modibo Diarra also seems an unlikely candidate, as the French will not put up with a Mali headed by a politician who phoned Barack Obama for advice when things get bad.

Who is Dancing in the Mali Streets? 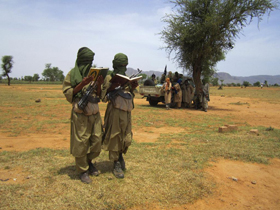 So far, the French are quite sincerely welcomed by most people in Mali, particularly by the agricultural settler tribes of Songhai, Fulbe and Mande. The historical memory of these Malians has been scarred by conflicts with belligerent nomads – the Tuareg, Moors and Arabs, the white men of the desert, so that in the long run the conflict also carries racial connotations. These people largely belong to traditional moderate Sunni Islam, rejecting a Sharia state, and represent 85-90 percent of Malians. They seem to accept the French intervention because it has prevented the bloodshed that would have happened had the Tuareg and Islamists advanced further into the south-west. The French can also expect support from certain Tuareg tribes, the Islamic Movement of Azawad that has split from Ansar Dine. The all-Malian group controls the Kidal area 1,500 km northeast of Bamako and wants a peaceful solution of the northern territories problem. It is no secret that, even quite recently, it was the Tuareg that French diplomacy backed – in the hope of preserving their exclusive development rights to the uranium deposits in Mali and Niger. But President Toure indicated a shift toward China, and in the final period of his rule, France launched backstage talks with leaders of the National Movement for Liberation of Azawad. At the Paris meetings the Movement promised to wipe out al Qaeda, suppress drug trafficking and provide France with uranium ore preferences. The French regarded a sovereign Azawad as the second exit out this hole. However, most Tuareg, embittered and ousted from their traditional areas, are preparing to launch a guerilla war, run caravans along trans-Saharan trails, trade arms and attack towns and Malian army garrisons, peacekeepers' bases, and French companies' personnel, all the time taking hostages.

The Gates to Hell

They seem to accept the French intervention because it has prevented the bloodshed that would have happened had the Tuareg and Islamists advanced further into the south-west.

On January 14, field commander Omar Khamaha said that, by deploying ground troops, France has opened the gates to hell, while the Malian Islamist ideologue Abou Dadar promised that in response to attacks on Islam the jihadists would hit France straight in the heart. Although fundamentalist leaders are known for their penchant for grandiloquence, a massive terrorist attack in France is becoming increasingly likely. But more likely seem chain attacks in Maghreb and Tropical Africa. The hostage-taking on January 16-17 in Algeria provides a regretful symptom. Now that the fighting in northern Mali is over, the terrorists will have the time, forces, and zeal to act. However, the greatest danger is of a different nature. The real hell's gate was opened when the secret services were preparing the Arab Spring and NATO aircraft were bombing Libya. The French operation in Mali is just one episode in the looming war for Africa, its resources, the hearts and minds of people across Africa.

Launching the Mali military operation, France referred to UN Security Council Resolution 2085 of December 20, 2012, which sanctioned the deployment of the Mali support mission in coordination with other countries. The Resolution did not authorize France's unilateral action, but on January 15, the Security Council unanimously backed France's military campaign. The French media triumphed as the military intervention was welcomed, even by the Russians and the Chinese. On January 20, France's Foreign Minister Laurent Fabius reported that Russia had offered Paris assistance in transporting troops and food supplies to Mali. Back on January 15, Reuters published videos showing the transportation of French military cargos to Mali using Russian AN-124 Ruslan airplanes, one belonging to the Volga-Dnepr Company, and the other to the firm Squadron 224, a commercial carrier affiliated with the Russian Defense Ministry. 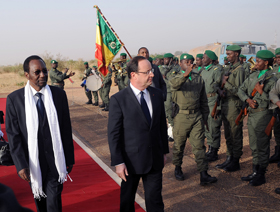 From the international security perspective, the best outcome for Mali would involve ousting the Islamic fundamentalists from the Sahel, reaching a consensus between the Tuareg and Bamako on autonomy for the northern territories, legitimate country-wide elections, and full-scale political and economic sovereignty. Economic recovery is only possible if the Malians are given a chance to diversify their economic policy and select partners on the basis of feasibility rather than a special relationship with a former-colonial power. Unfortunately, this scenario does not fit into the postmodernist interpretation of international law, currently read as the rule of the gun.